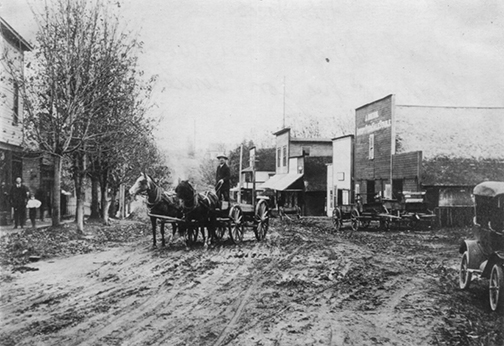 The town of Langley, tagged the Village by the Sea, is perched on a low bluff near the southern end of Whidbey Island in Puget Sound. Town founder Jacob Anthes first purchased land here at age 15, helped plat the town in 1891, and built a wharf.

As new families arrived, First Street filled with businesses and homes, and the town was incorporated in 1913. Fishing resorts sprang up, but when the passenger ferry service shifted from Langley to Clinton, the town languished. During the 1970s, an influx of young artists and hippies arrived with an appreciation of the areas unspoiled natural setting. Today, Langley offers a quiet, off-the-main-highway lifestyle with seaside beauty and the cultural stimuli of theater, art, and music.

A permanent Snohomish tribal village once stood at Sandy Point, east of present downtown Langley. German settler Jacob Anthes and the Langley Land and Improvement Company platted the town in 1890 (filed 1891), naming it for Seattle Judge James Weston Langley (1836-1915), the company’s president.  Incorporated as a fourth-class town in 1913, Langley was reclassified in 1975 as a Noncharter Code City and is the only incorporated city on South Whidbey Island.  In its early years, the town was an important trade center on the island for agriculture, fishing and logging but, when these industries declined, South Whidbey became a recreation and vacation retreat for both visitors and island residents.  The threat of large-scale development in the 1980s led Langley residents to grow their economy based on their best assets: the island’s natural beauty, its rural character, its heritage and the arts.

The Donation Land Claim Act of 1850 drew homeseekers and adventurers west and the earliest non-Indian settlements on Whidbey Island date from that time. Whidbey Island’s first white settler was Isaac Ebey (1818-1857), who claimed land on the central part of the island in 1850. In the next decade, he was joined by other settlers near what became the town of Coupeville on the middle portion of the island. Central Whidbey offered an excellent cove, a stand of old growth trees, and open prairie land for farming. But the southern portion of the island, with its heavy forests and dense undergrowth, was settled more slowly. The earliest settlers on South Whidbey seem to have been reclusive loners or claimants who took land for the purpose of logging. 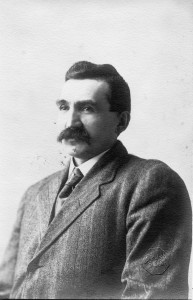 Jacob Anthes, who would pioneer Langley’s early development, left his home in Gross Gerau, Germany, in 1879, when he was 14, to avoid compulsory military conscription and begin life in a new land. Anthes and a friend, George Miller, arrived in New York and set out for Topeka, Kansas, to visit Miller’s mother. Anthes worked in the stockyards there for a short time but soon set out alone on the transcontinental railroad for San Francisco. From there he headed north, in 1880 arriving in Seattle where he met a businessman who had a homestead claim on South Whidbey Island. Anthes agreed to move onto the property in order to hold down the man’s claim. He occupied a rustic cabin built by a previous settler and began cutting trees to sell as cordwood to Mosquito Fleet steamboat operators. He is reported to have cut about 35 cords a day, with the help of loggers that he hired. Anthes also planted a large vegetable garden, with plenty of potatoes that he sold to loggers and other workers on the island. And he began exploring the southern portion of Whidbey Island on foot, writing diaries of his experiences. 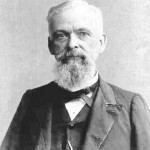 In 1889 Anthes married Leafy Weeks, a woman from Seattle, and the following year he purchased a homestead tract on a bluff overlooking Saratoga Passage, built a house, and began planning a town. When Washington gained statehood in 1889, the establishment of townsites in the region reached a state of madness as entrepreneurs awaited the arrival of the Great Northern Railway and speculated where it would first touch West Coast tidewater. Anthes placed his hopes on South Whidbey Island’s location and resources and sought backing for town development. With financial support from Seattle Judge James Weston Langley, C.M. Sheafe, James Satterlee, A.P. Kirk, and Howard B. Slauson (1861-1933), Anthes formed the Langley Land and Improvement Company and deeded property to the company for development. The town plat of Langley — named for the judge — was drawn in November 1890 and officially recorded on April 9, 1891.

One of the company’s first projects was building a 999-foot dock, at a cost of $5,000. Anthes opened a general store and post office across the street from the dock. In the hard times following the financial Panic of 1893 most of the Improvement Company’s plans had to be set aside. In addition, the dock had been poorly located and fell victim to heavy tides and storms. When severe storms destroyed it in 1894, the company did not have the means to rebuild and, for a time, large vessels were unable to dock at Langley.

Klondike Gold Rush dollars and a national economic recovery renewed Langley’s prospects in the late 1890s. Anthes was granted a contract to supply brush needed for shoreline development in Everett and Seattle. In 1902 the Langley Land Company deeded land back to Anthes and he began building trails and roads to the interior of the island and a road to connect Langley with Clinton. He also constructed a new dock, a quarter of a mile east of the original wharf, in a partially protected cove. Langley became South Whidbey’s trading center for loggers, fishermen, and farmers, with steamers connecting to Everett, Seattle, Camano Island, and Whatcom (now part of Bellingham).

Having started with almost nothing, Anthes now owned the town’s general store, its water system, a post office, and a bunk house and cook house for workers. He was also becoming prosperous from his real estate holdings, not only on Whidbey Island but also in nearby Everett.Polk’s City Directory listings link Anthes to a hotel in Everett as early as 1904 and by 1908 the Anthes family had moved from Langley to the riverside of Everett. The directories list Anthes in Everett from 1908 to 1939, the year he died.