Thanks to Bob Boswell for sharing the following memories of summers spent on Mutiny Bay. A lightly edited (for length) version is in our latest South Whidbey Historical Society newsletter. Enjoy.
————
A Kid’s Day at Mutiny Bay in the Early 1950’s by Bob Boswell… 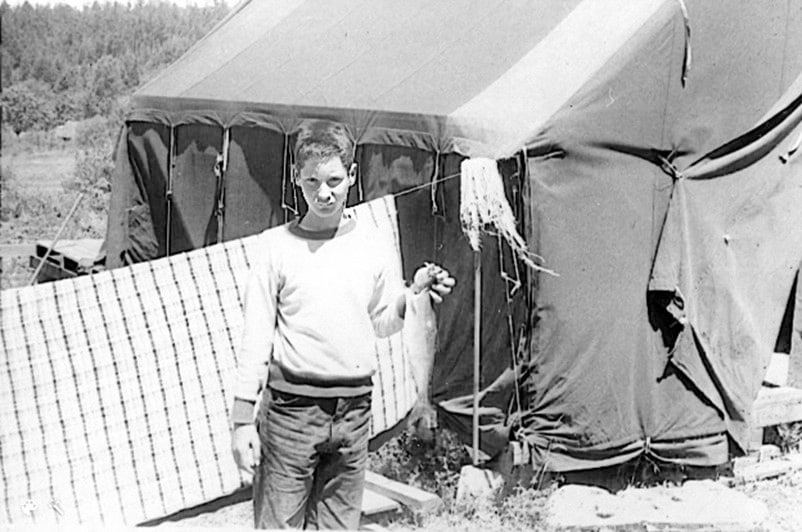 Bob Boswell and the tent he stayed in.

My folks bought a lot overlooking Mutiny Bay in the summer of 1951. The family had recently spent a week at Chet Holt’s Mutiny Bay Resort. I was 12 years old going on 13 in late summer. It was a fantastic week. I was allowed to take the boat out by myself if I could start the outboard motor. It was a 4.2 hp Champion with a recoil starter mounted at the bottom of the powerhead. I did it.

When my dad became aware of a small development near Robinson’s Resort that had just opened up, he jumped at the chance of having his own spot on Whidbey Island. Fishing was in his blood. And $600 dollars at the time was something he felt he could afford.
That fall, weekends were spent clearing out the brush. Come spring he built a 14 x 20 foot platform and frame structure and mounted a 14 X 14 surplus army tent. Other lots had also been purchased, tents put up and small structures
built. 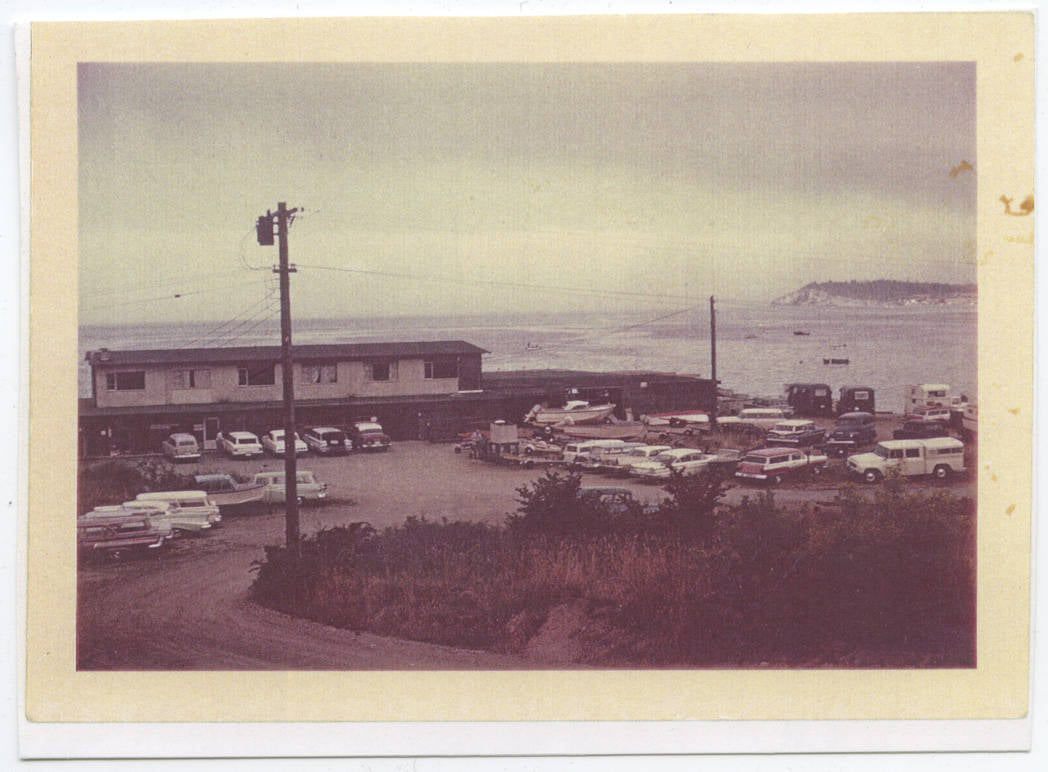 Nothing was intended as a full-time residence. No water, no electricity and two ruts for a road. And many of these families had kids of teen and pre-teen age. Life revolved around “the beach” and Robinson’s Resort.
A summer day started with fishing with your dad in the morning. There were two options. Being launched from Robinson’s marine railway or having shore anchored your boat the night before. This required a knowledge of the tides, an anchor with the proper length to account for the depth and tide, and a shore line that was long enough so that you could push your boat out into deep water. 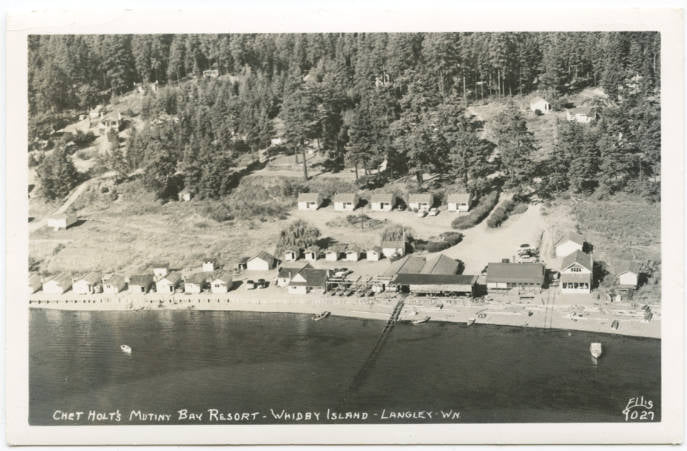 The line was attached to the crown of the anchor such that it would not interfere with the flukes digging into the sea floor. When the boat drifted as far out as necessary, a jerk on the shore line pulled the anchor off the bow 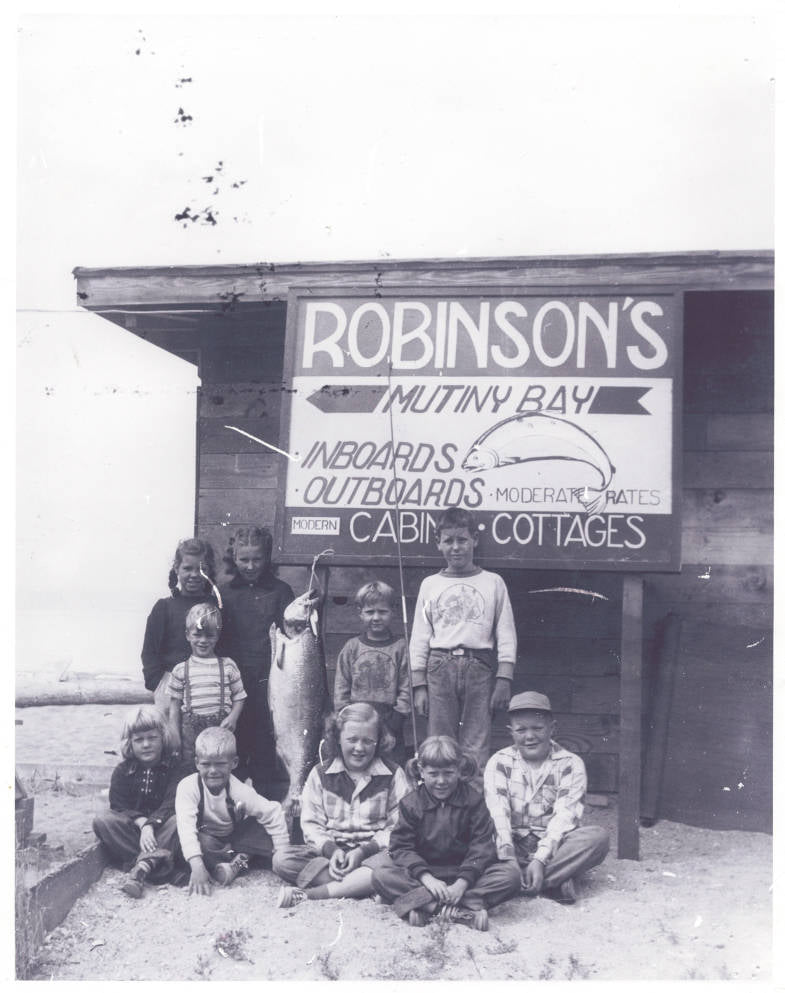 Children with a big salmon at Robinson’s resort, 1960 Can anyone identify them?

and the tidal current set the anchor. The other end was securely attached on shore. In the morning you simply pulled the boat to the beach, hopped in and started fishing as soon as the water was deep enough.

If the fish were in, it was almost wall to wall boats. Two local kids operated a bait raft that supplied fresh herring to the fishermen. Dodger and herring or candlefish were the rigs of choice for the trollers. Cut herring was the choice of the spin fishermen. And if the humpies were in, it was not uncommon to get your limit. 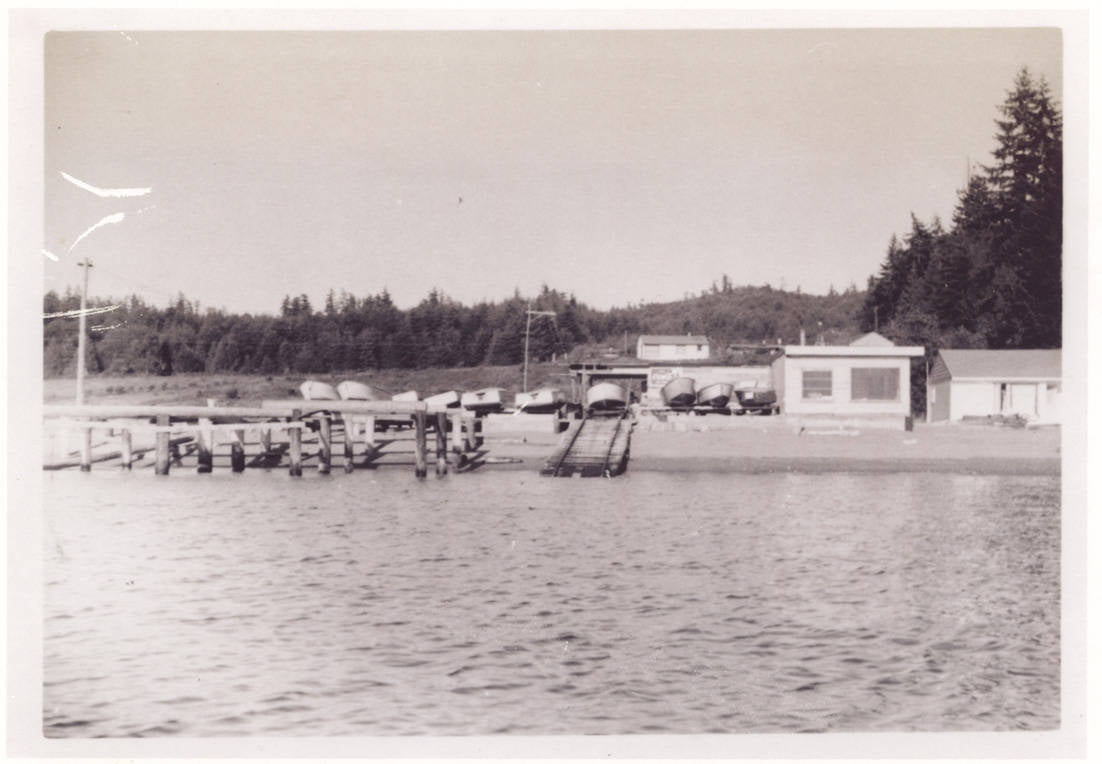 If you had more salmon than you knew what to do with, you might have taken it to the Harbor Custom Cannery in Freeland and had it canned. When finished you might again shore anchor or be hauled up on the marine railway. And then up the hill after cleaning the fish and breakfast.
In the afternoon, we kids would go out and bottom fish. We’d anchor, or sometimes drift with the currents. Sole, flounder and a rare cod were our rewards, but often we would have to deal with a dogfish. Other rare catches were skates, ratfish and a sea cucumber or two. When we tired of that we would play on the beach. 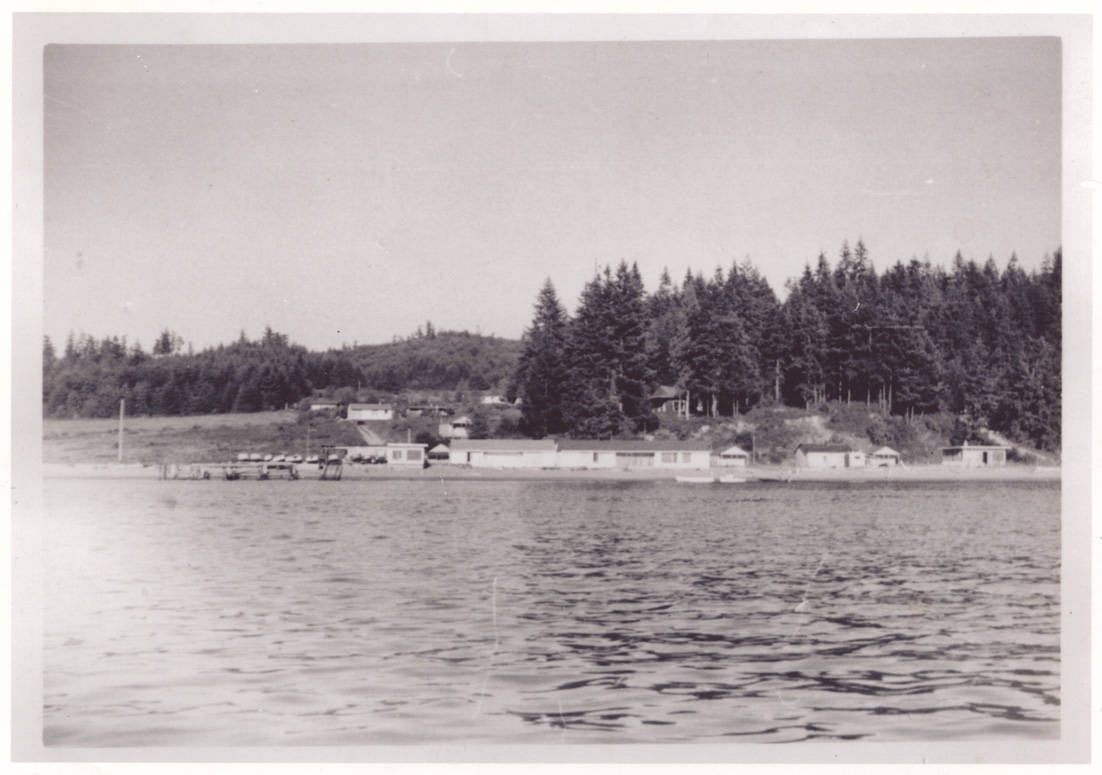 Evenings were another set of adventures. We might fish with the parents, or most likely sit on the resort bulkhead and fish for bullheads. About 8 PM, the Seattle-Victoria steamship, Princess Marguerite would come down the channel and it created large waves that the kids would play in and create havoc for the boaters who were trying to take care of their boats.
Finally back up the hill, into bed, eagerly awaiting a repeat the next day.