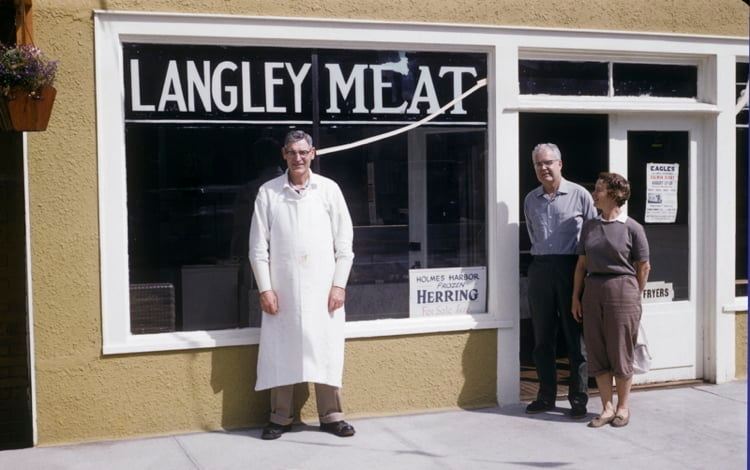 Most towns had butcher shops or meat markets before that function was brought inhouse to grocery stores and supermarkets.

Frear’s meat scale still sits out front where the Meat Market had been located.

If you have any recollections of Bob Frear’s Meat Market, please share them below as we would like to create a display of past First Street businesses in Langley.

Here is some history from the LangleyHistory.org website of which our vice-president, Bob Waterman, serves as Chair of the Langley Historic Preservation Commission.

“Frear started out as an apprentice butcher in Seattle in 1912. His family had settled near Lone Lake in 1920, and Bob worked for the Lynden Poultry Company and later for the Cooperative Egg and Poultry Association.

He married May Bainter in 1930, and they started their own chicken business on property between Park and DeBruyn.

May’s grand-niece, Gayle Pancerzewski remembers “Bob was always dressed in his old time white butcher outfit and when someone came in with a youngster he would reach into his cold display case and pull out a wiener and hand it to the youngster to eat, like some store owner today might hand out a candy. He always had the historical meat market sawdust on the floor.

Bob did not display a lot of meat cuts, preferring to cut them to order for customers. When someone would come in to get a couple of steaks he would go into his cold storage room where several quarters of beef were hanging and bring one out and lay it on his large butcher block and ask the customer how thick they wanted him to cut the steak right in front of them where they could tell him where to place his sharp knife to make the cut.

If the piece involved a bone he had his butcher hand saws to make the cut and also had a few very large cleavers that would cut any bone.”

Bob Frear retired from the meat market in March, 1971.