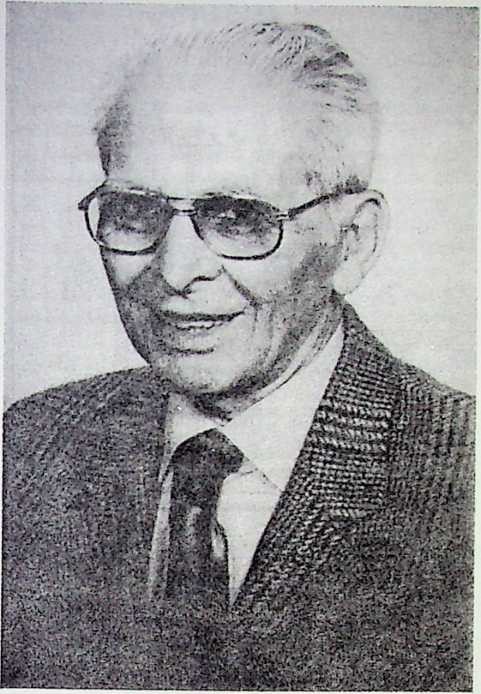 The handsome black haired boy with the snapping dark eyes hesitated on the steps of the Bayview school on the first day of the opening semester in September 1915. He wanted very much to go into the building and was excited at the prospect of starting school but he also was fearful, not just because school was a new adventure but because the only language he knew was Italian.

Victor Primavera, for half a century one of Langley’s leading merchants, remembers his surprise that first day of school to discover that he was not the only youngster with a language problem. There was a veritable babble of broken English mixed with Norwegian, German, Swedish and his own Italian. As he remembers, the teachers made no big deal out of the situation. They simply settled down and taught their young charges English, along with liberal doses of reading, writing and ’rithmetic.

Vic, as he is known by the Langley population, remembers a few years later when the fact that he was speaking in Italian caused quite a furor around town. When he was 13 he was allowed to make his first solo trip into Seattle to spend a week with relatives. He had packed his suitcase carefully with his best clothes, groomed himself nicely and set off for the city on the passenger boat, Calista.

The morning was foggy and without warning the Calista was rammed amidships by the big freighter, Hawaiian Maru. Vic, along with the other Calista passengers, scrambled up a rope ladder to the safety of the deck of the Maru as the Calista went to a watery grave. Sublimely unaware that he might have lost his life in the shipwreck, Vic’s concern was that he would be in big trouble because his suitcase with all his best clothes had gone down with the ship.
The passenger boats, The Flyer and the Virginia V, were dispatched to take the strand-ed passengers to their Seattle destination and when Vic was safely at his relatives’ home his first thought was to phone his parents in Langley and assure them of his safety. Those were the old days when telephones were on party lines and the operator rang the desired number but all other members of the line could hear the ring and, if they so desired, listen in on the conversation.

Vic’s father came on the line and his excited 13 years old son launched into an account of his shipwreck, speaking in Italian. When Vic arrived home later he was severely chided by the several members of his “party line’’ because everyone was listening in, eager for details of the accident and no one could understand a word he had said.
Vic’s father, Joseph, was bom in Bologna, Italy June 1, 1859 and came to Seattle in 1899 where he owned and operated a saloon. He met Vic’s mother, Martina, who had come to Seattle in 1889 to work for her great aunt in her boarding house. They were married in 1904 and made their home on the shores of Green Lake where Vic was born in 1909.

Martina had inherited 100 acres of land on Whidbey Island in the Bayview area about where the Useless Bay Golf Course now is and, when it appeared that prohibition was imminent and would put the saloon out of business, Joseph and Martina, with three year old Victor, moved to Bayview onto the property.

Joseph had sold his business for $1200 and he spent the entire amount at the Bayview Mill for material to build a new house. At that time the waters of Useless Bay came all the way up to what is now Highway 525 and tugboats came in to “Crane’s Landing’’ with deliveries within 300 feet of the Primavera house. There was a salty spot at the edge of the Lagoon and deer came regularly to lick the salt.

Joseph Primavera soon became convinced that he was a businessman, not a farmer, and he started a shoe repair shop in his home. In 1918 he purchased a lot on First Street in Langley from Joseph Coleman who had operated a drug store in a building there.

The building was in a run down condition but Joseph repaired it, built a lean-to on the back for living quarters and opened up his shoe business. Vic continued to attend the Bayview School, his father having made a shrewd business deal with the operator of a jitney which picked passengers up at the Langley dock and took them to Bayview. He transported Vic back and forth to the Bay view school for a nickel a day until Vic was 11 and transferred to the Langley School.
As time passed Joseph Primavera started remodeling his old building and adding other lines of clothing and later, groceries to his shoe business. He built a three bedroom home in the back of the store to replace the lean-to. In 1929, he constructed a completely new building, tearing down the old structure as the new building proceeded.

The new two story, brick-faced building was one of the most impressive in Langley at that time and was christened The Star Store. For several years the Primaveras operated nine hotel rooms on the upper level charging $1 per night in the beginning and eventually raising the price to $1.50. They closed out the hotel part of their business in 1943 when the government Office of Price Administration rulings took effect and became a nuisance. In later years the upper level was used for merchandise and an ex-tensive toy department.

The Tiemeyer Bakery, which was one of the most popular spots in Langley and a congregating place for young people, was next door to the Star Store where young Vic worked with is father. Shortly after 1934 Vic became aware that the Tiemeyer Bakery had a new clerk and that she was exceptionally pretty although quite young. He suddenly developed a yen for sweet rolls and doughnuts which necessitated spending a good bit of time in the bakery and required attention from the young lady, Ann Peters. Her parents, Peter and Marie Peters had arrived from California and settled in the Deer Lake area.

Vic and Anne were married in January of 1938 and Vic bought the store from his dad who died the following Christmas at the age of 80. Vic’s mother died in November of 1940. For a time the newlyweds lived over the store but eventually they bought a seven acre waterfront ranch with a large barn and a farmhouse on Saratoga Road. In 1967 they sold the property to Max and Joye Bitts and built an attractive new home on Third Street in Langley. They sold the Star Store in 1977 to Dale Elliott and retired. Vic and Ann have four children, Joanne, Janet, Jeanine and Joseph. Ann’s mother, Marie Peters, has lived in a small house on Second Street in Langley for 40 years and was 88 in 1985. 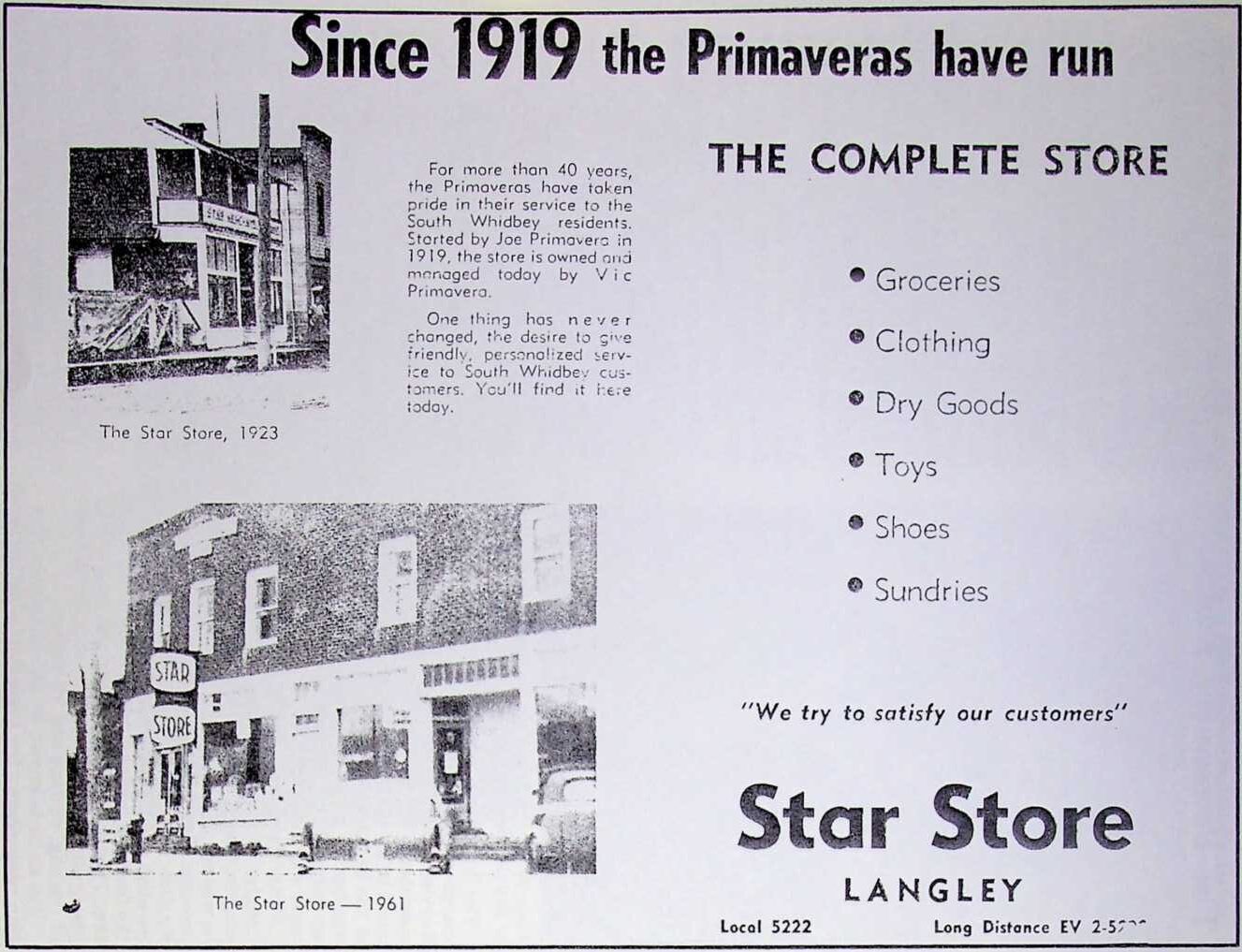 The Star Store building, which is now owned by Gene and Tamar Felton who operate the Langley Market there, is a Langley landmark. Old timers recall that Primavera’s Star Store was the place where “you could get everything’’ including a chance to visit with neighbors who shopped there.

Vic recalls that between 1920 and 1930 there were about 200 people living in Langley and that there was not much money around but nobody ever went hungry because everyone had gardens, fruit trees, chickens, cows, fish and clams. Fourteen pounds of sugar sold for $1. The Washington Egg and Poultry Association, which was founded in Bayview in the early 1920s, bought feed and wholesaled eggs. In 1924-25 Vic recalls they shipped eggs to New York for 50 cents per dozen cleaned and graded.

“We had a monopoly for two years until Wisconsin ‘got into the act’ and undercut our prices. During that period there were chicken farmers all over the place. Then prices dropped to as low as one dollar for 30 dozen eggs. In 1927 a local depression hit and it helped prepare us for the 1929 Big Depression during which we all went back to stump farming.’’