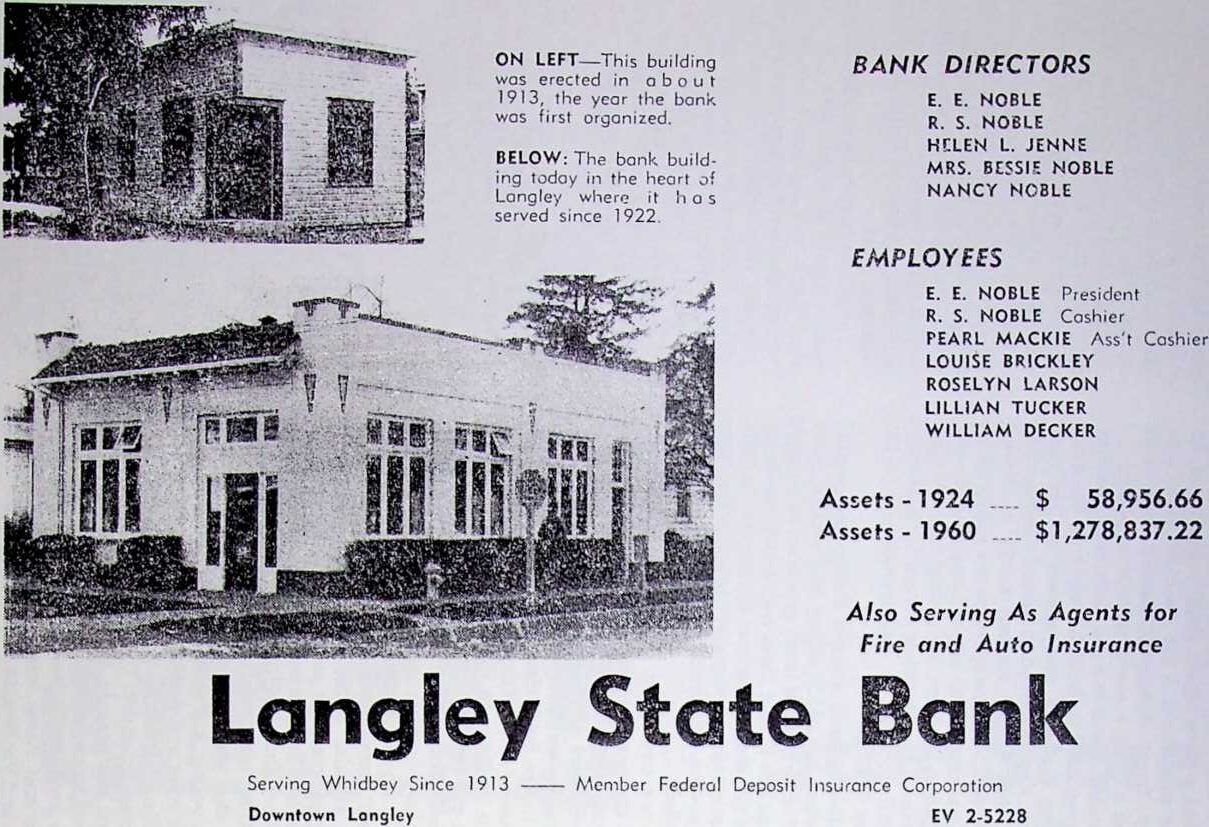 The 1913 bank building shown in the accompanying picture was moved onto other property owned by Ernest Noble across from the Fair grow on Camano Avenue and was preserved and used by an Island real estate company.

They should have been used to cold weather for he was from Maine and she was from Nebraska and after their marriage they had spent six years in Alberta, Canada but none of those experiences prepared the Noble family for the chilling reception they received during their first winter in Langley back in 1924. At least that is how it seemed to their son, Ernest Jr., who was 14 years old at the time.

“Our first winter in Langley was one of the coldest on record. The bay froze over and on Holmes Harbor ice was so thick that is was us-ed for ice boating. Dad and mother had moved into what is now known as the Ludington house on the waterfront on First Street between Anthes and Park. The house was just “board and batten” at that time and there was only a wood stove to heat it. There were five children besides myself and it seemed as if all we did was cut wood and stoke that stove in an effort to keep warm. This was new to us because we had been used to coal stoves. Fred Funk had a transfer business and he brought over the first coal from the mainland which helped keep steady heat but it was indeed a chilly winter for us.”

That was the way Ernest, or Ernie as he is more popularly known, described his introduction to Langley. His family had supposed Whidbey Island to be “in the banana belt” when they were living in Alberta, Canada. There Ernest can remember going to school in 40 degree below zero weather on a school bus pulled by a team of horses which took him 11 miles from his home to the school.

His father, Ernest Eugene Nobel was born in Maine in 1872. His mother, Bessie Saxon, was born in Nebraska in 1881. In 1898, they met in the Washington State Big Bend country where Ernest Sr. had purchased a tract of land. They fell in love and the 25 year old man and the 16 year old girl were married and set up housekeeping as farmers. In the course of time their union produced six children, Helen, born in 1900; Ralph, in 1906; Ernest, 1909; Betty and Naomi, bom in 1913; Claude, born in 1918.

The Nobles eventually sold their farm and Ernest Sr. became an executive in the Reardon bank. In 1915 they left Reardon and, after a two year sojourn in California, they bought two and a half sections of land in Alberta, Canada, where they remained for six years. A severe drought caused them to go broke and they returned to the United States where Ernest hoped to get back into the banking business.

He found the opportunity he was seeking in Langley on South Whidbey. The Langley bank had originally been founded in 1913 with James Langley, nephew of Judge Langley for whom the town was named, as president. Directors included William Kohlwes, Fred Funk, Frank Olson and H. P. Jensen. The bank had started out with high hopes and total resources of $8913.90. Unfortunately the local business firms and individuals to whom the bank made loans were unable to meet their payments and by 1917 the bank was in trouble. A letter from the state bank examiner dated October 2,1917 states in part; “Excess loans must be reduced to the legal limit; renewals of loans in excess of 20% are not permissible. Your reserve is but 13%. Bring this up to the requirements of the law which is 15% on all deposits.”

By 1918 the Langley Bank was in the hands of the receivers. Later it was reorganized and given a new lease on life by Albert Ryland. In October of 1924 Ernest Noble Sr. took over the management of the bank and from then onward the bank grew and prospered.

Ernest Noble Sr. had no intention of maintaining his family through another winter in the drafty house on First Street fronting Saratoga Passage where they had first settled. In 1925 he purchased the Roderick McLeod house which is now part of the Jones Department Store and the Noble family made their home there until 1942.

By 1928 his banking business was thriving and Ernest Sr. branched out into other fields. He became secretary-manager of the Whidbey Berry Association, a member of the Island County Fair Association and secretary and a stockholder of the Whidbey Telephone Company. He also was elected Town treasurer. In 1929, he became ill of cancer. His son Ernest Jr., who had graduated from Langley High School in 1927 and was attending the University of Washington, came home to assist his father at the bank. During the early Depression years, when banks all over the nation were going broke, the two Nobles father and son, kept the Langley bank on even keel and in continuous operation. When Ernest Sr. died in 1934 his son and namesake took over his position as bank president and also most of his other offices. An older son, Ralph who had been working for the Black Ball Ferries, came home in 1934 and went to work in the bank with his brother. They continued to manage the bank until 1968 when they sold it to Peoples Bank. Ralph died in 1971.

In the meantime Ernest Jr., had purchased a house and several acres of land on Edgecliff Drive in 1937. Shortly thereafter a young lady, Maxine Marple from Oaksdale near Spokane who had been working in Honolulu with Ernest’s sister Helen during World War II, came to Langley for a visit. That was the beginning of a courtship between Ernest Jr. and Maxine which culminated in marriage in 1948. Over the years two sons were born to their marriage, Ted and Robert.
Like his father before him Ernest Jr. became involved in the affairs of the community, serving as Langley mayor in the 1950s and in various other official capacities including Town Councilman and the Town Planning Commission. He was active in the formation of the Whidbey-Snohomish Ferry Association in 1937 and was elected its secretary. He was a leader in forming the Help House Public Assistance program which later evolved into the Extended Services of Island County. He was a member of the Island County Historical Association and one of the original members of the South Whidbey Historical Society of which he is currently (1986) vice president.

Ernest and Maxine have made their home on their Edgecliff Drive property ever since their marriage and they presently (1986) own a considerable amount of waterfront and acreage in Langley. The other children of Ernest Sr. and Bessie Noble attended Langley schools and then moved from the Island. Helen married Paul Jenne of Coupeville; Claude went to work for the Peoples Bank in Denver and is now retired; Betty married James Waldon and they are now retired and living in Manson, Washington.

Bessie Noble died in 1969 and is buried beside her husband in the Bayview cemetery.