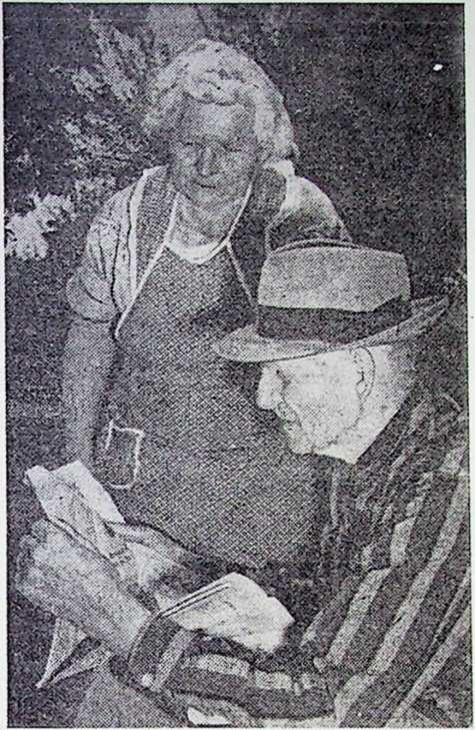 On a certain Sunday in 1907, a 30 year-old carpenter, Albert Melsen, decided to take his wife, Amelia, and their small daughters Elva and Grace, on an outing. He had come to the Pacific Northwest from Nebraska to visit his sister in Everett and was casting about for a suitable place to make a permanent home. Out of curiosity he decided that their Sunday outing should take the form of a boat ride to a new settlement called Langley on Whidbey Island. It was being much publicized on the mainland.

As the Melsen family debarked at the Langley dock Albert gazed around, sizing up the situation. There wasn’t much to see as villages go, just a couple of stores, a livery stable, a hotel, a blacksmith shop and some odds and ends of businesses strung out along a dusty street. However, on the gentle slopes above the main street a checker-board of farms basked serenely in the pale golden sunlight against a backdrop of towering evergreens.

He turned and gazed out across Saratoga Passage which was dappled with waves dancing merrily over to the Camano Island shore. He raised his eyes above the emerald green of Camano to snow-capped Mt. Baker and the Cascade range of rugged peaks framing the whole scene. The tiny village seemed to be set like a gem in a sea of platinum ringed with diamonds, and emeralds. Andrew Melsen had at last found a place to his liking.

He purchased 11 acres on Edgecliff Drive near the Furmans and McGinnises. In one of the columns published in the South Whidbey Record in 1985 Bill McGinnis reminisces about the Melsens as follows:
On the other side of us was the hard-working Melsen family. They were a beautiful family in every way. Mrs. Melsen was real nice and mighty pretty. The two daughters, Elva and Grace, were beauties.

We played in the Melsen granary among the smoked ham and bacon hanging there. Once we strayed downstairs under the floor and found a box and a half of brown waxed paper cylinders packed in sawdust and some small brass cartridges. The printing on the outside of the boxes meant nothing to us. When we told our families about the boxes, it cause unbelievable consternation and placed Albert behind the eight ball until he found a better place to store his blasting powder and dynamite caps.

For all that, Albert Melsen was a great guy. He loved to go barefoot better than any kid that ever walked. He had a silly laugh that sounded like a very small steam engine exhaust, something like — ‘chih-chih-chih.’ Dad had a new shaving brush which didn’t narrow down like a shaving brush is supposed to. He called it ‘a dam broom.’
“Go tell Melsen I want to see him,” he said to me. Never questioning, I told Albert and down he came this Sunday morning in his big bare feet and an innocent grin. As he comes to the kitchen door, Dad meets him with a big brushful of lather, full in the face. Albert looked downright surprised but recovered quickly and went trudging back home with his barefoot lope, chuckling — ‘chih-chih-chih’ as though he thought it was a real great joke. So much for Whidbey Island humor!

In later years Albert Melsen was active in the giving and building Langley’s first efficient water system. It came from the spring of sweet water that rose on the back of my uncle Kirk’s place. Albert Melsen held the office of mayor of Langley for many consecutive terms by popular acclaim and affection. He helped Langley in many ways during those years.
Albert Melsen was a builder, not a farmer, and after a short time he moved from the Edgecliff farm into town, settling in a cabin on a portion of what later became the Fossek property. Albert and Amelia’s son, Lawrence, was born there.
Albert Melsen became the leading builder in the Langley community. In 1908 he constructed the Olympic Club, now known as The Dog House. He was the chief builder of the original Langley Methodist Church as well as several private residences, many of which are still in use in 1986.

In 1913 construction slowed down so the Melsens moved to Gold Bar, then to Tacoma where Albert worked in the shipyard during World War One. A son, Howard, was born there in 1918. At the close of the war the Melsens returned to their original state, Nebraska, where they remained until 1927. However, love for Langley was in their blood. They returned and remained in Langley for the rest of their lives.

While they were in Nebraska their daughter, Elva, married Richard Luhn and the young couple remained there until 1932. While there they had two children, Leanne and Robert. Times were difficult in Nebraska and the young couple was hard-pressed to make a living. Elva had fond recollections of her childhood in Langley and longed to return there. They packed their scanty possessions in the back of a Ford pickup and, with their two children, set out for Whidbey Island, camping out along the way.

Elva recalls that they arrived in Langley practically penniless and they stayed with her parents while her husband worked at odd jobs. Later Richard Luhn became established in Langley as a prominent realtor and they built a beautiful home on Sixth Street where Elva was still residing as this is written. Richard died in 1980. Their daughter, Leanne, also lives in Langley. Son Robert lives in Spokane.

Lawrence Melsen married Lyla Funk, daughter of the owner of Funk Mercantile Company, which operated in a building constructed by Albert Melsen. Both Lawrence and Lyla were christened in the Langley Methodist Church built by Lawrence’s father. Lawrence and Lyla remained in South Whidbey until 1950 when they moved to Everett where Lawrence was employed as a machinist until 1978 when he retired. They returned to the island and settled on Brighton Beach Road in Clinton. Their children are Lawrence Jr., and Emily Jane. Both live off the island. Lyla died in 1985.

Albert Melsen contributed much to the physical development of Langley, using his talents as a builder to construct most of the business buildings in town as well as many private residences. Besides The Dog House and the Methodist Church he also built the Masonic Temple, the Clyde Theater, the Clyde Garage, Skipper’s Restaurant and the Star Store. He was active in obtaining help from the WPA to construct the Pole building on Island County Fairgrounds in Langley.
The town elected and re-elected Albert Melsen as its mayor for a total of 16 years and as a Councilman for five more years. He installed the Town’s water works and dug all three of its first wells.