The Lenz and Fossek Families 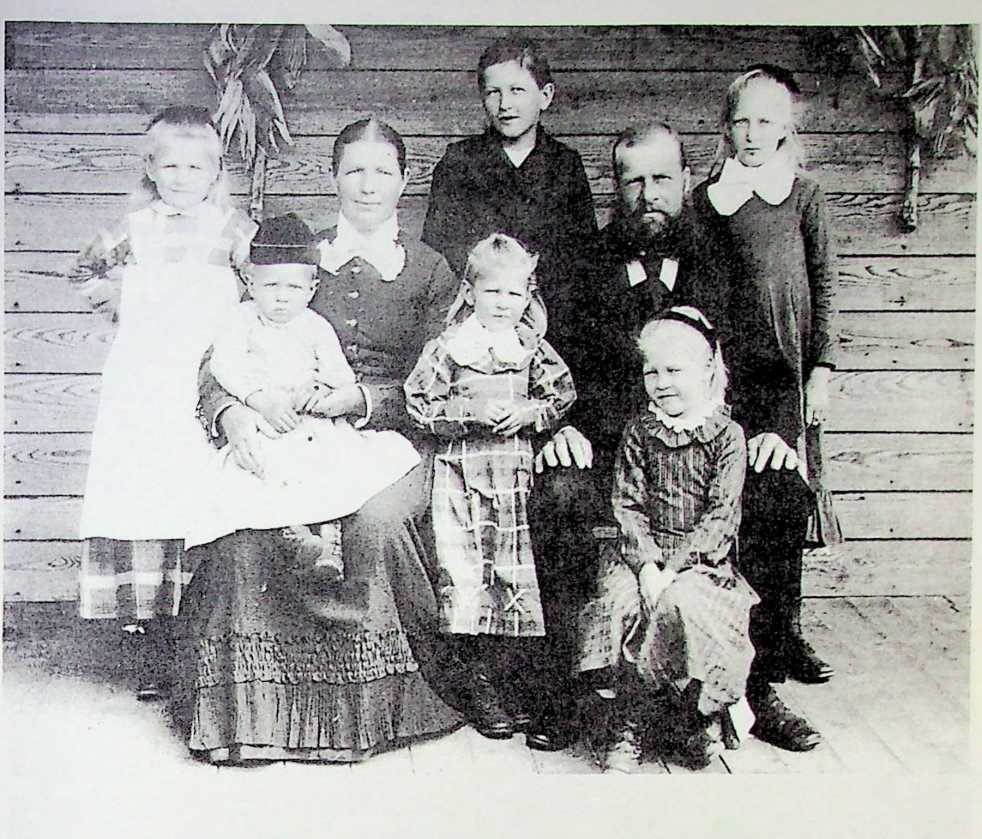 When a woman who has been a busy wife and mother for over 20 years is left a widow in midlife with six grown and teen-age children it would be logical to assume she would slow her pace and settle down in the area to which she was accustomed. That is not what Louisa Lenz did. Instead she literally started a new life for herself and her brood. She left their home in Virginia in July 1907 after her husband died, and set out to seek her fortune on her “Isle of Golden Dreams”, Whidbey, bringing with her all six children, Carl, Fred, Emma, Marie, Minnie and Edith.

She settled on 10 acres on Third Street across from the present St. Hubert’s Catholic Church. At first Louisa and her six children lived in a 16×20 shack with a loft on the site of the present Fossek home. (The building still stands just south of the present Fossek house). Along with farming her acreage Louisa built the “Lenz Hotel” with the help of her children. It faced Third Street on the lower end of her property. The hotel business proved a non-profit venture and eventually closed but there are still folks like Carolyn Johnson in Langley and vicinity who recall staying there at one time or another.

Carl Lenz, more familiarly known as Charlie, opened a garage in Langley on First Street across from the Star Store and operated it for many years, becoming known throughout the areas as an expert on Model T autos. He was one of the business men who helped form the Langley Dock Company. Fred Lenz worked in Everett for many years for the Everett Water Department. He married the daughter of Fred Heinz and purchased the original Primavera farm in Bay view. Marie, Edith and Minnie all married and eventually moved from the island. Emma married a young man who had come to the United States from Hungary, Emil Fossek. Their son, Ray, was to become one of the leading landowners and farmers in the Langley area. In 1927 after a 25 year old man named Charles Lindberg became a world hero by flying an airplane solo across the Atlantic ocean, more than one young man became fired with the ambition to take off into “the wild blue yonder.” Among Langley youths bitten by the flight bug were 20 year old Ray Fossek and his friend Morris (Morrie) Hensley. Morrie worked in the Lenz garage in 1933 for Ray’s uncle, Carl Lenz. In their spare time the two young men would go to Seattle and take flying lessons. 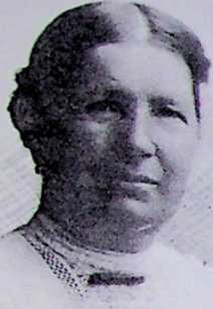 Although airplanes . . . “flying machines”, they were called then . . . had been around since 1908, they had not been around Langley until the special day that Morrie flew into town in a $500 bi-plane which Ray, Morrie and Morrie’s cousin, Clim Simms had pooled their resources to purchase. The young men had made arrangements with the Jewetts of Bayview to use part of their farm as a landing field and a considerable gallery of spectators had assembled to watch the plane arrive. Morrie at the controls, made a couple of graceful swoops for the benefit of his audience but came in too low, clip-ping a high stump as he landed. 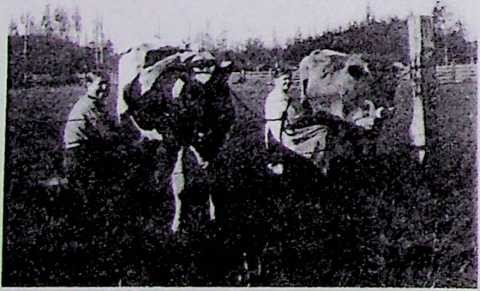 Louisa and Marie at milking time.

No permanent damage was done and Morrie continued to take the plane up regularly for solo flights while Ray was busy working in the woods. Then came the day when Ray was due to take the controls. Morrie took him up to coach him on technique but before they had reached 700 feet altitude the engine stalled. The plane and its two would-be aviators came crashing to earth in the Millman Marsh. The plane was totaled but by some miracle, both youths were unharmed except in their pocket-books. Ray says that to this day he can visualize hard-earned dollar bills floating around him and dissolving as the plane crashed.

From then on Ray Fossek decided to keep both feet on the ground. The ground upon which he has kept both feet firmly planted over the years is now one of the outstanding farms in the Langley area. 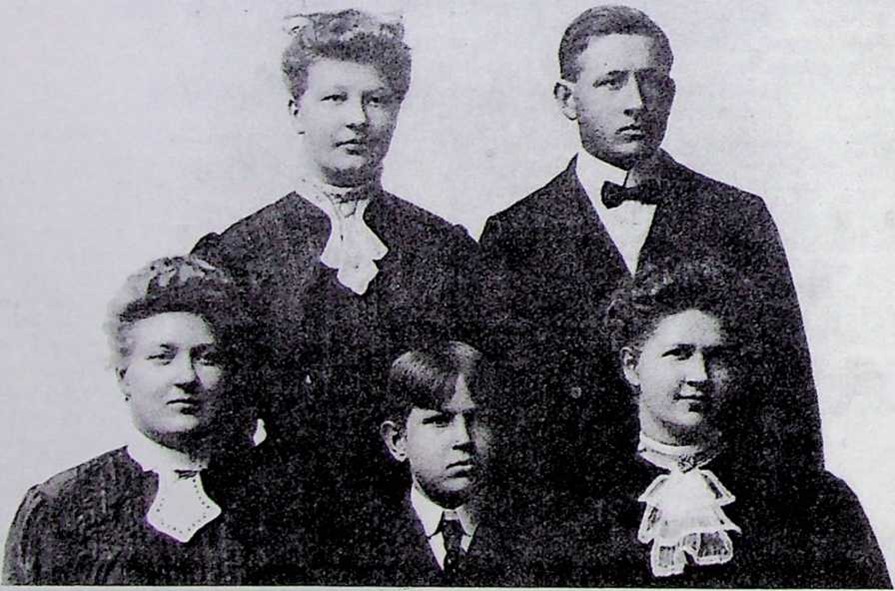 Ray Fossek’s story begins back on October 26, 1913, when he was born in Seattle’s Providence Hospital to Emil Fossek and Emma Lenz Fossek. Emil had come to the United States from Hungary. Emma was the daughter of Louisa Lenz. After their marriage Emil and Emma settled in the Maxwelton area on a farm on Ewing Road. For a time Emil operated a blacksmith shop there. When their son, Ray, was quite small Emil and Emma separated and Emil left the island. In order to support herself and her small son, Emma hired out as a cook going wherever there was work between Tacoma and the San Juan Islands. She worked as a cook at the Lone Lake logging camp for some time and is shown in the accompanying photo of the four-horse team and logging wagon beside Lone Lake. Son Ray is on the horse in the photo which is used in this Volume through his courtesy.

Ray spent some time of his childhood staying with his maternal grandmother, Louisa Lenz, and uncle Carl on their 10 acres.

When Ray was 12 years old, Emma married Joe Reuter and they settled in Seattle. Ray, however, much attached to the rural life on South Whidbey and to his grandmother, prevailed upon his mother to allow him to return to Langley and live with “grandma” and help her run the farm. He entered sixth grade at Langley school in 1926 and continued his schooling in Langley High School, being one of the leaders in the forming of the school’s first football team. In 1932 the hotel burned down and Ray helped Grandma Lenz build a new home on its present site. Ray purchased the home property from his grandmother in 1934.

In 1938 Ray married one of his classmates, Laveta Grimm, daughter of a pioneer Bayview family. Laveta brought to the family a daughter, Betty Mae, then age 5, and they settled down to the business of farming, logging and increasing their family. A son, Fred, was born in 1943, and the twins, Rae and Carl, born in 1947 rounded out the family.

In 1945 Ray began adding to his original farm by purchasing the adjacent Jensen property south of Sixth Street. In 1950 he added land along Park Street to his holdings and his farm became a show place in Langley. For many years he raised and sold turkeys, maintaining a flock of about 5,000. He also raised laying chickens and sold eggs in the area up until 1967, but, like most South Whidbey farmers, he worked in the logging industry to support his farm and later as a bulldozer operator preparing homesites and clearing land for the continuing immigration to South Whidbey. His farm, over the years, has been noted for raising unusual breeds of cattle and horses. 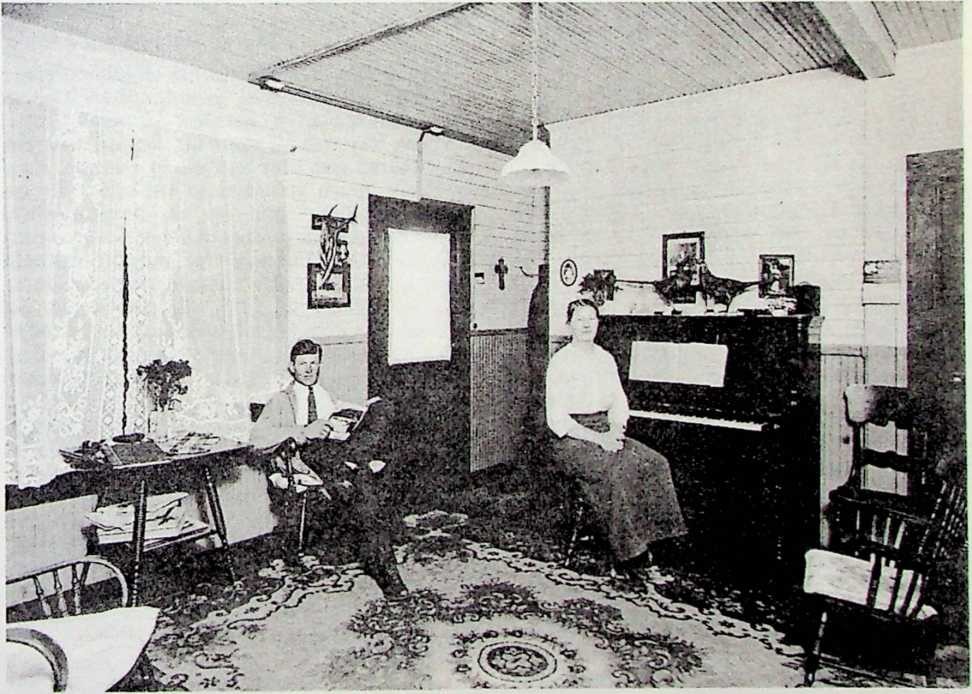 Laveta died in 1976. In 1978, Ray married Joyce Wernik, a long time friend of the family whose parents, Karl and Adrianna Wernik had settled on Lone Lake shore in 1954.

On his 70th birthday Ray was feted at a par-ty attended by over 200 guests. The following account was published in the South Whidbey Record, November 1, 1983. 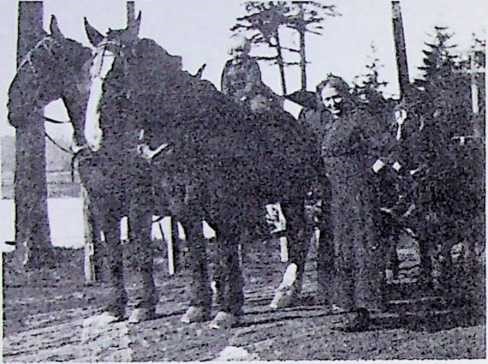 As fall rain mixed with washed golden leaves the afternoon of Oct. 22, Brookhaven recreation hall hummed with the rhythm of over 200 people assembled from all points in Washington and Oregon to honor the 70th birthday of one of South Whidbey’s best known pioneers, Ray Fossek. 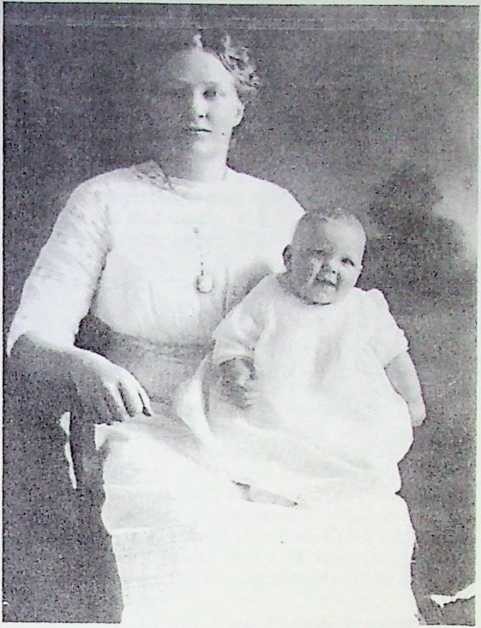 The hall was decorated with flowers, fruits and vegetables interspersed with memorabilia assembled from the honored guest’s seven decades of farming in the Langley area, and also from some of his hobbies over the years such as duck hunter’s decoys, deep sea fishing tackle and football equipment from an earlier day. 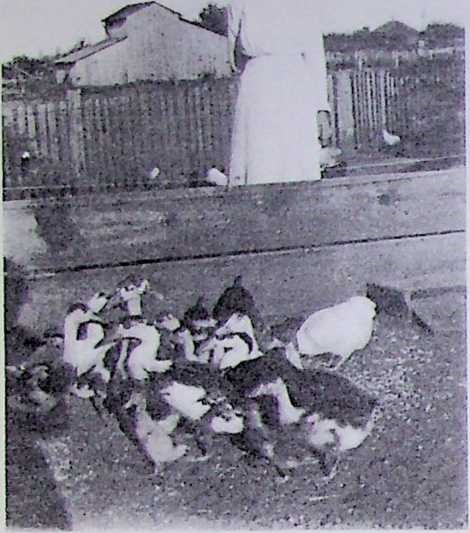 Marie Lenz about 1910. Note Lenz barn in the background.

A fleece from Ray’s sheep and a butter churn from the past aroused the curiosity of the younger guests and reminiscences of the older folks. Also creating the illusion of life in an earlier time were sheaves of prize-winning wheat, saddlery, poultry equipment and cattle-raising paraphernalia. Old and new logging accoutrements supported one corner of the room. Over all was a mock ceiling festooned with gold and yellow crepe paper. Antique crystal candelabra flanked the impressive birthday cake and the honored guest was toasted with homemade apple cider. 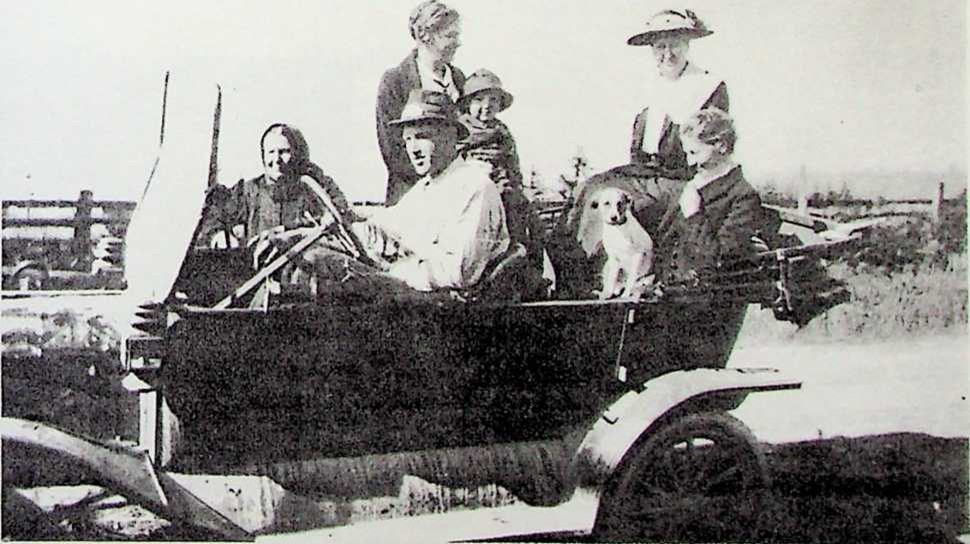 In charge of arrangements for the festive party, which came as a complete surprise to Ray, were his wife Joyce, his son, Fred Fossek from Portland, his daughter and son-in-law, Vance and Rae Tillman, son Carl Fossek and Wendy Wood.
Ray, who presently owns and operates a working farm of 90 acres, partly inside of Langley and partly in abutting county area, is noted for his big, white, imported French Charolais-Cross cattle, and also for his special breed of Galiceno horses, descended from the famous mounts of the Spanish Conquistadores. 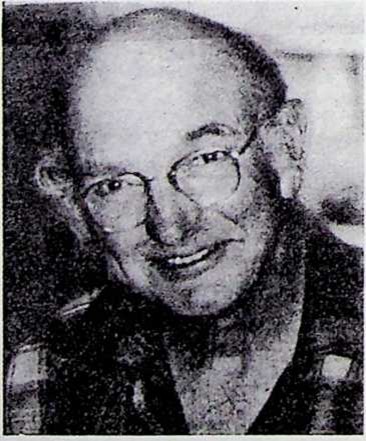 Ray Fossek, well known Langley area
farmer, was feted by over 200people who
gathered for his 70th birthday party.