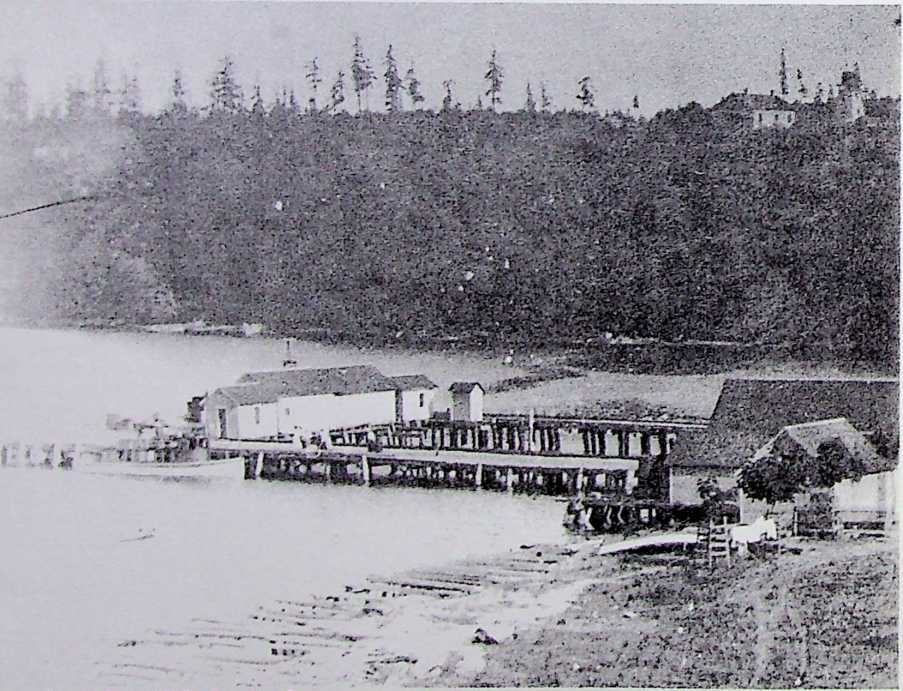 Langley waterfront about 1912, showing Jensen warehouse. The Cattron house is shown at the top of the hill.

“How would you like to go out West and see this Alaska-Yukon-Pacific Exposition that’s being written up in the paper?”
The year was 1909. The place was the Iowa living room of Hans Peter Jensen. He was ad-dressing his wife, Cecila. She responded with enthusiasm, ‘‘That exposition is in Seattle, isn’t it? Seattle is not far from that town . . . Langley, I think they call it… on Whidbey Island where our friends the Melsen’s live. If we go to the ex-position we could go on up to the island and visit the Melsens too. Let’s do it!”

They did do it, taking with them on the holiday trip their children Jake, Christina, Jens, Fred, Chris and Carl. They visited the Melsens, too, and fell in love with the green and glowing area around Langley. They bought a house and 100 acres of land on the southwestern edge of town and moved lock, stock and barrel from Iowa to their new domain. Their new house was a good house with a big, comfortable country kitchen and downstairs bedrooms but Hans immediately added a second story with three more bedrooms to accommodate his sizeable family.

Bill McGinnis, Langley pioneer and a columnist for the South Whidbey Record in 1985 described the arrival of the Jensens as he remembered it. 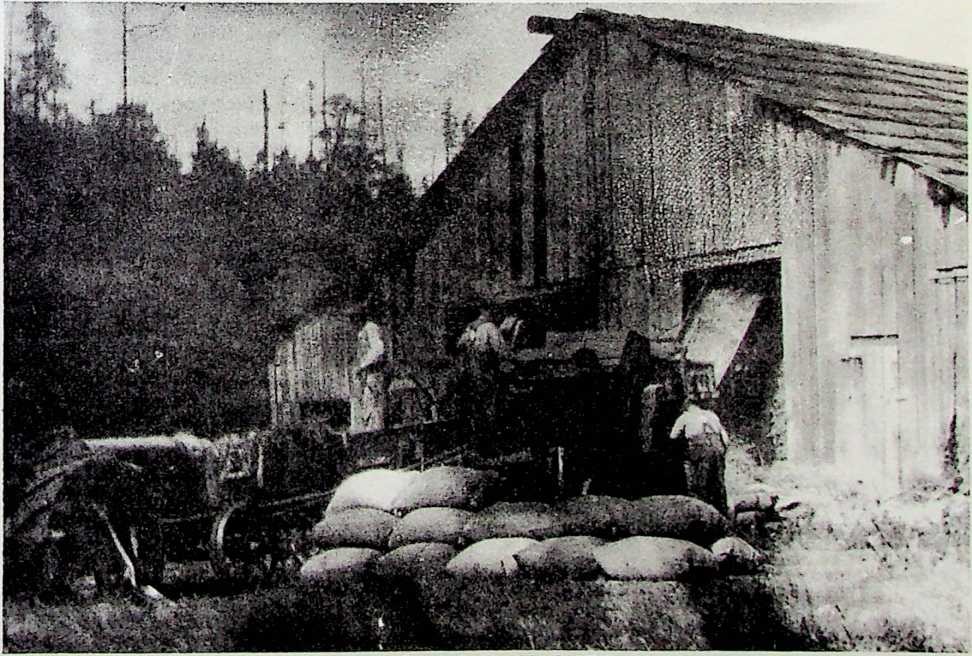 Then came the H. P. Jensen family, with a Danish farmer background. Jensen bought the whole hill above the town that faced out toward Camano Island. Jensen had some money. He bought good cattle and horse stock. He built fine bams and a silo. Everything was neatly fenced and all five boys worked the farm. Later he bought the wharf and adjoining properties and the city water works. He was the first to bring automobiles to Langley and the whole family fitted into the community very well and were well liked.

Hans Peter Jensen soon became one of Langley’s leading business men. He not only bought the dock and waterfront on Wharf Street, he also bought stock in the bank, the cannery and the telephone company. Then, besides his original 100 acres he also bought 20 acres of land for $11 per acre in the area of the present city limits on Saratoga Road. Next, he branched out beyond Langley and bought a large acreage on Double Bluff, including Oliver Lake. Hans and Cecelia’s youngest son, Carl, who was seven years old when they arrived in Langley, described what life was like on the Jensen farm in an interview prior to his death
in 1982.

The boys all helped with the milking, even Carl who had a special bucket and cow just right for a seven year old to milk. The boys peddled the milk in quart bottles in downtown Langley and Sandy Point for six cents a quart and each boy received one cent for each quart he sold. They also made butter from the cream which was separated from the milk by a mechanical separator and they had a flock of laying hens. They sold eggs to the co-op.

The Jensens built a silo and processed corn and also a mixture of wheat and vetch. Each summer the big barn (which is still standing) was filled with clover hay which had been mowed with a horse-drawn mower, then hand-raked and tossed into a wagon. In 1920 they purchased a tractor. They butchered calves, hogs and chickens for meat. They hired a man with a donkey engine to clear the trees off their land and then sold the cord wood. 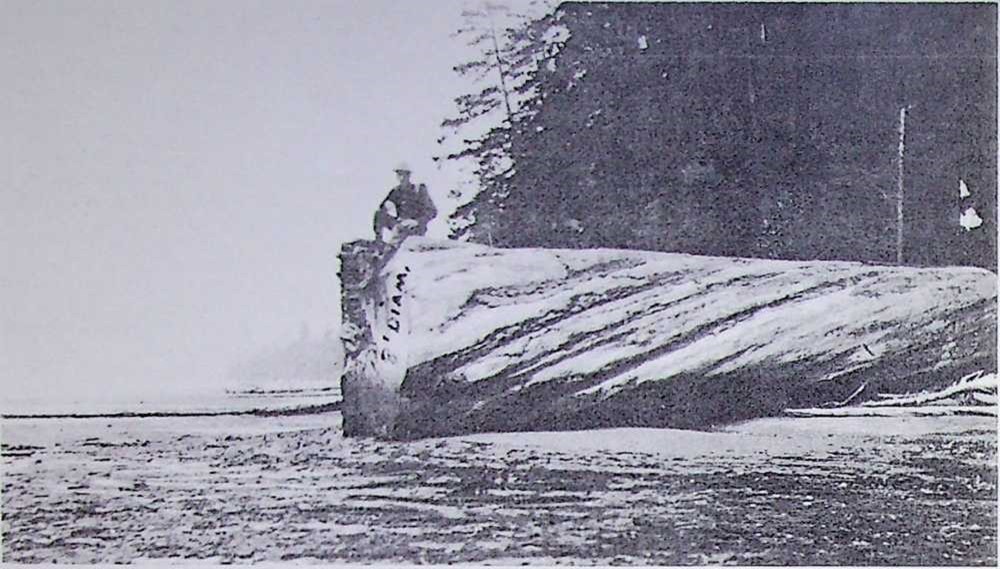 Floyd LeGraue sitting on a log 8 ft. in diameter on beach at Double Bluff 1913. (Photo courtesy of Carl Jensen)

Although there was much love and fun in the large Jensen family there was discipline too. Carl used to get a “licking” when he disobeyed his father. His last thrashing was when he was 14. His brothers all had the measles and Carl had to do the chores. His father came home and found him playing. Assuming that the chores weren’t done he gave him a whipping before waiting to find that the chores had already been done. When his father found he was wrong he gave Carl 25 <£ (big money then) to show he was sorry.

For sports the high school baseball team played Oak Harbor and Everett; the team would chart Phil Simon’s 50 foot ‘Captor’ boat for transportation. Carl was drafted onto the high school team while he was still in grade school because they were short of players and he was big for his age and also a good player. Oak Harbor in those days wasn’t much bigger then Langley. When the boys got older they went to the dances in the Dog House and at Clinton. For fun on Halloween the Jensen brothers, along with other young mischief- minded boys, would haul anything moveable from cattle wagons and row boats to chemical tanks from the fire engine up the schoolhouse steps and when possible, into the school.

Helen Scott wrote the following interview with Jake Jensen in the Everett Herald in 1967. It gives an insight into the relaxed way of life the Jensens enjoyed in early Langley.

Life was pretty casual in those early days, Jake recalled. Folks let the cattle and horses run loose throughout the town. Horses from the Livery Stable, he said put in their morning stint of work, and then were turned loose to forage for themselves around town until their afternoon schedule when they were rounded up.

It was in those casual days Jake recalled, before electricity had made its debut on street corners, that they used to have a friendly little card game in the back of the confectionary store at the dock, and one black night after such a session, he climbed Wharf Road and was making his way in the wee hours of darkness through town when he fell smack dab over a cow that was sleeping in the middle of the path. He couldn’t recall later whether he or the cow was the more startled. 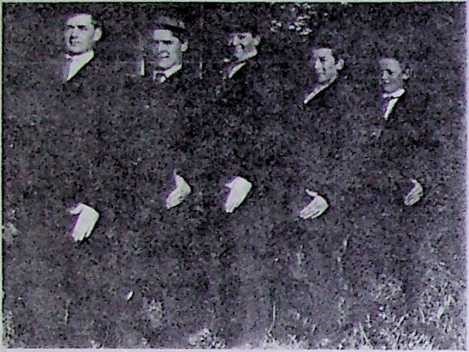 Photo of the Jensen brothers taken about 1912. Left
to right, Jake, Jens, Fred, Chris and CarL (Photo
presented through the courtesy of David McLeod)

Reactions to early day drama varied. Jake Jensen once dashed into a burning hotel and saved some Liberty Bonds of one of the tenants, plus mining stock which proved to be only good for papering the walls, he said.

In 1917 Jake enlisted in the army and was sent to France where he nearly died of pneumonia before returning home.
In 1921. hard times fell upon the Langley business community, including Hans Jensen. The bank had gone broke due to too many outstanding loans which people couldn’t pay. The cannery also had gone broke due in part to a huge batch of beets which spoiled. The phone company was going through a series of ups and downs and changes of location. Hans, who by then was nearing 60 years of age and in failing health, turned his dock holdings over to his eldest sons, with Jake in charge. Jake kept them until 1926 when he sold to Willis Nearhoff.

Hans divided his telephone stock equally among each of his boys. In 1924 the phone company was purchased by the Noble family and put on even keel. After putting his older sons in charge of his waterfront holdings Hans turned management of his Double Bluff acreage over to his three younger sons, Fred, Chris, 21 years old, and Carl, 18. They lived a bachelor’s life while working the farm.

In 1921 a family named Corliss bought the property adjoining the Jensen farm at the foot of Double Bluff. With them came their pretty teen-age daughter, Rowena. In short order Carl made friends with Rowena and bought a Model T Ford in which to court her. In 1922 the Corliss family boarded the ill-fated Calista for a boat trip to Seattle on the morning it was rammed and sunk by the freighter, Hawaiian Maru. Carl nearly died of heart failure when he heard that the Calista had been sunk. Fortunately all hands, including the fair Rowena, were safe.

In 1924, one year after his father’s death, Carl and Rowena were married. The ceremony was performed by the Rev. Robinson of the Langley Methodist Church.

Life was good but not easy for the newlyweds. For a time Carl worked in a sawmill in Everett and the couple lived in a house in Langley at the end of Sixth Street. Soon they returned to the Double Bluff farm where they raised commercial seed peas and also oats. During the lean years they lived on “pea soup”, Carl remembered. Bootleggers during prohibition used to land in the night at Double Bluff landing; there also were plenty of bootleg and moonshine stills around the area. The young couple kept a low profile and no one molested them although there was one worrisome night when a band of rum-runners set up a lookout on a ledge just above Carl and Rowena’s house.

Roads in those days were narrow and unpaved. During the rainy season it was not uncommon for cars to get stuck up to the axles in mud, and their occupants had to walk home.

The marriage of Carl and Rowena Jensen lasted 54 years until Rowena’s death in 1978. It produced a son, Leo who was born in the Edmonds Nursing home owned by Rowena’s aunt. A daughter, Carol, was born at home with the assistance of a doctor from Coupeville. Carl died in 1982 leaving, besides his children, seven grandchildren and two great grandchildren.

Hans and Cecelia’s only daughter, Christina, married Herbert Weedin of the pioneer Weedin family and they made their home at Bay view.