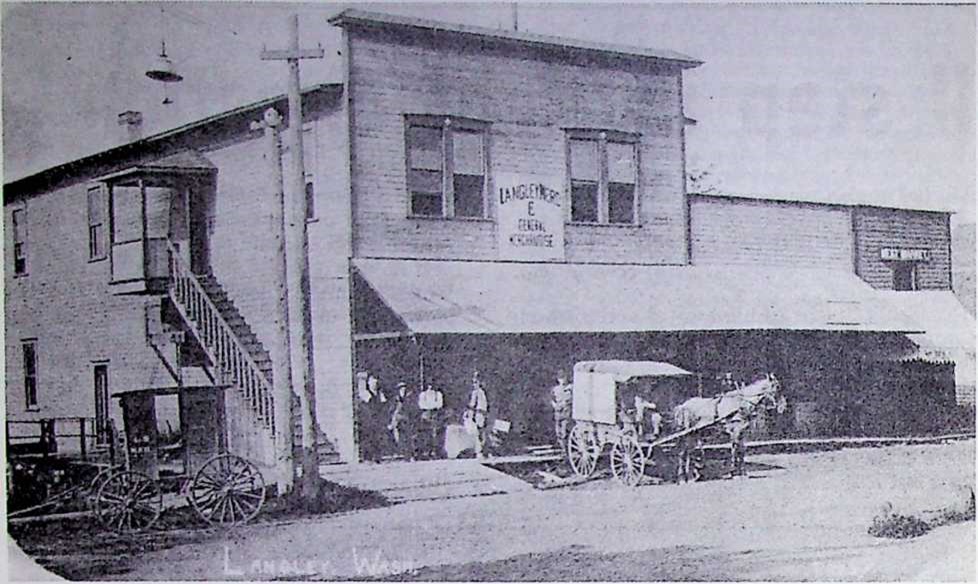 A view, above, of the future Dog House Tavern from Anthes Street around 1914. Below is the modem day version. The Langley Post Office was located inside the building for a time.

It is impossible to tell the story of the Hunziker family without also recounting the activities of the Howard family. Intermarriage between the Howard and Hunziker young people caused the fortunes of the two families to be linked in many areas. The Howard family history also is linked to the McLeod clan by marriage, Sarah Howard having married Roderick McLeod in Nebraska prior to migration of the separate families to Langley. 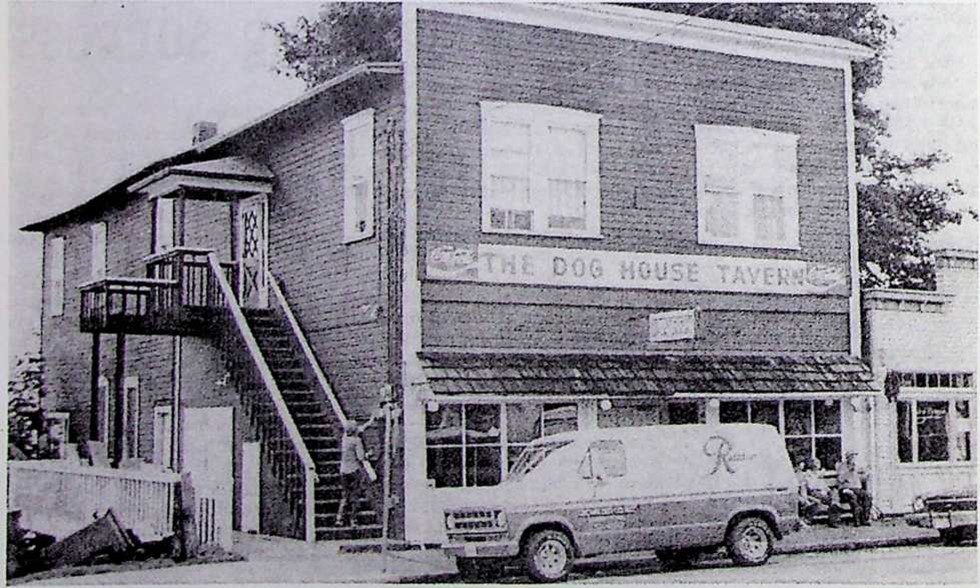 Edward and Clara Howard arrived in Langley in 1900 with their children, Alice, William, Arthur, Fred, Goldie, Ray, Edna and Daisy Fem. A description of Edward Howard was written by William McGinnis in his column published in the South Whidbey Record, May 21, 1985. (McGinnis, whose family also were Langley pioneers, was personally acquainted with Howard.)

Ed Howard was short, bow legged and tough. He was a likable opportunist. He, it was, who made deals for the shingle-bolt cribs and the brush scows to load at Langley, the latter of which was used for rip-rap repairs on Seattle river banks. These contracts came when people needed the money very badly.

After he came to Langley he built the building which for a long time housed about all the com-munity doings. In no time he had the store. One of his sons drove the R.F.D. route. Another had the pool room and a daughter married the partner. A family member ran the livery stable, a son- in-law had the post office. It was hard to find an enterprise in town without a member of the Howard family in charge. He was energetic and a wheeler-dealer and not backward in taking a little advantage if it was offered. Yet, Ted Howard was a very generous man.

Edward Howard opened up a general merchandise store on First Street, directly across from the Anthes Emporium, and he was soon appointed postmaster to replace Anthes. Walter Hunziker, Sr., who was a teen-ager at the time, recounts the incident in his memories.

Jacob Anthes brought all the Post Office supplies and all the mail and dumped them on the floor of Howard’s store. He also notified Mr. Howard that L .D. Brook, the first RFD Mail Carrier had resigned. I was then 15 years old and happened to be calling on Howard’s daughter that evening. (She became my wife in 1906). Mr. Howard came to the house about 9 p.m. to get his daughter to help him sort the mail. He also asked me to help as I knew more of the residents. He had only come the year before.

We sorted mail until 2 a.m., and the next morning at 7 a.m. his son, Will, and I worked to deliver the mail with an old horse and spring wagon. It took us 12 hours that first day. 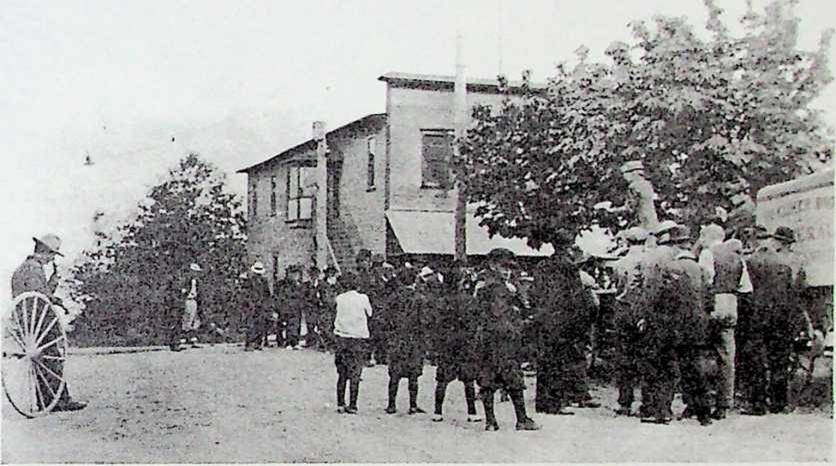 Public auction in front of the Dog House on Market Day, May 27, 1914. Note the Hunziker Brothers delivery wagon in the right of the photo. (Photo courtesy of Vincent Brehm)

August 1,1901 I was appointed temporary mail carrier. I bought three ponies at S25 each and rigged up a two wheeled cart, alternating ponies every day. The mail route was to Bay View, Freeland, Bush Point and Sandy Point. I was paid S50 a month.

At Freeland the road ended at the beach and to get on the road to Bush Point I had to drive about half a mile on the tide flats. Many days I had to move logs to get out on the beach. At high tide I had to drive in water sometimes 2 or 3 feet deep.

My last day I had to drive in water three feet deep. The wind was blowing and the logs moving. My pony shied, jumped to one side, capsized the cart, and threw me into the cold water. He kicked himself free and ran away. About a mile on the Bush Point Road I met a Mr. J. Lovejoy with a team of oxen and a load of bricks. He had caught my pony. I then mounted my pony and delivered the rest of the mail and resigned. This was on December 31, 1901.

A few years later, after his brother-in-law and sister, Roderick and Sarah McLeod had arrived in Langley, Ed Howard went into partnership with the couple and established the Howard Hotel which was operated by Sarah and Roderick and their children. Ed Howard also started a jitney service for folks in the surrounding area who needed transportation to and from the passenger boats which docked regularly at Langley.

Emmy Dassel Hunziker, wife of Walter Hunziker Jr., who lived with her parents at Double Bluff prior to her marriage, recalls that if folks were unfortunate enough to miss a boat Ed Howard would put them up at his hotel until the next boat arrived. She also remembers a humorous story about Ed Howard’s automobile which was the first in Langley. Someone tried to drive it but didn’t know how to stop it and it went round and round in circles until it finally came to rest on the porch of the store.

Swimming on Langley beach. (Courtesy of May Frear)

Ester Anderson Moe, who grew up in Langley from 1906 on, said in an interview with Eva Simmons, “Ted Howard was the neatest guy! He would come to the school grounds at 3:30 when school was dismissed and fill his car with kids, then drive them from the school to the junction of the Clinton-Maxwelton roads. He did this until every kid in school had a ride.’’

When Langley was incorporated in 1913 Ed Howard was a member of the first Town Council. His son, Will, was town marshall in 1914. In 1909 the Howard store burned down under mysterious circumstances just a year after the Anthes store had burned, also under questionable conditions. Following the burning of his store Ed Howard re-opened his business in a newly constructed building at the intersection of First and Anthes Streets above the waterfront.

The building was first known as the Olympic Club but over the years it has become a Langley landmark known as The Dog House. It has been the heart of much of the social and cultural events of the town for the past 78 years and it had a most unusual beginning. Walter Hunziker Sr., tells his version of the origin of the building.