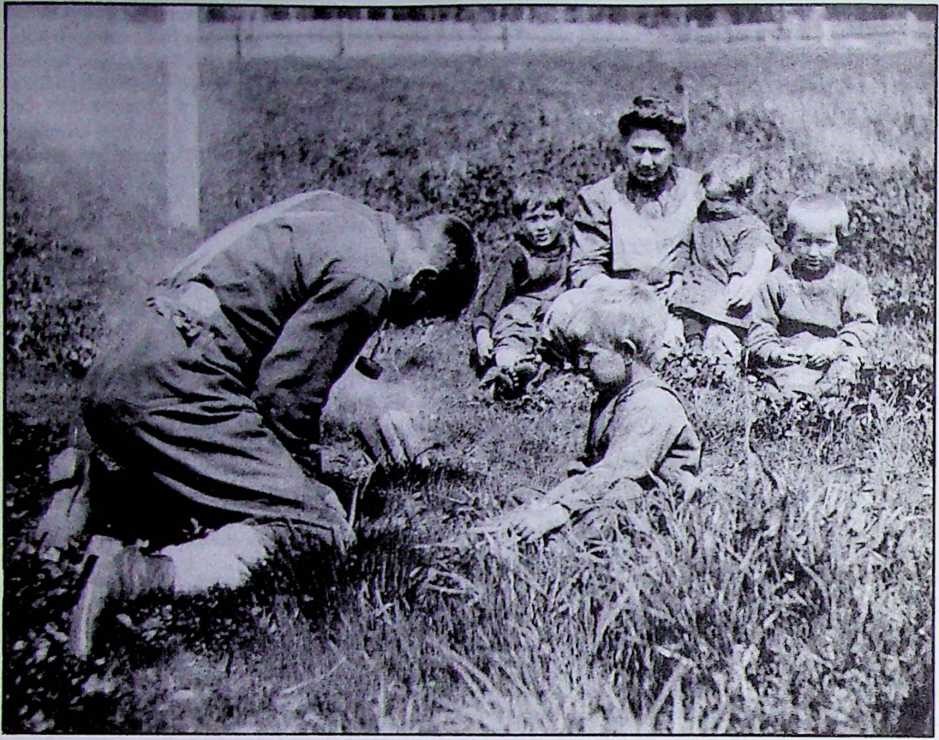 Ed and Eva Hellman and family, one of the earliest settlers to homestead the Cultus Bay area.

Skyrockets were exploding all over the place during the wedding of Howard Hellman and Lillian Bodin. The bridegroom had spent his last five dollars on the marriage license. Their wedding presents included a cow, a turkey gobbler, and six turkey hens. Their first home consisted of three rooms with no plumbing. Half a century later, they are among South Whidbey Island’s outstanding pioneer couples, and their home is on Hellman Road (named for them), in the Cultus Bay area. Howard was born in that area in 1904 and has lived in the same general area his entire life.

Their story really begins a few years before Howard was born when his parents, Edward and Eva Hellman, took out homestead rights on acreage on the north end of Cultus Bay around the turn of the century.

Edward and “Peg Leg” Anderson (whose story is told in the Clinton part of SW and Its People, Volume 2), were brothers-in-law. It was partly due to the glowing accounts that Anderson gave of the opportunities on South Whidbey that the Hellmans settled at Cultus Bay. Edward Ellis, who was Eva’s uncle, also settled in the area, as did Eva’s sister, Edith Lovejoy, whose husband was a ship’s captain and owned a freight line. 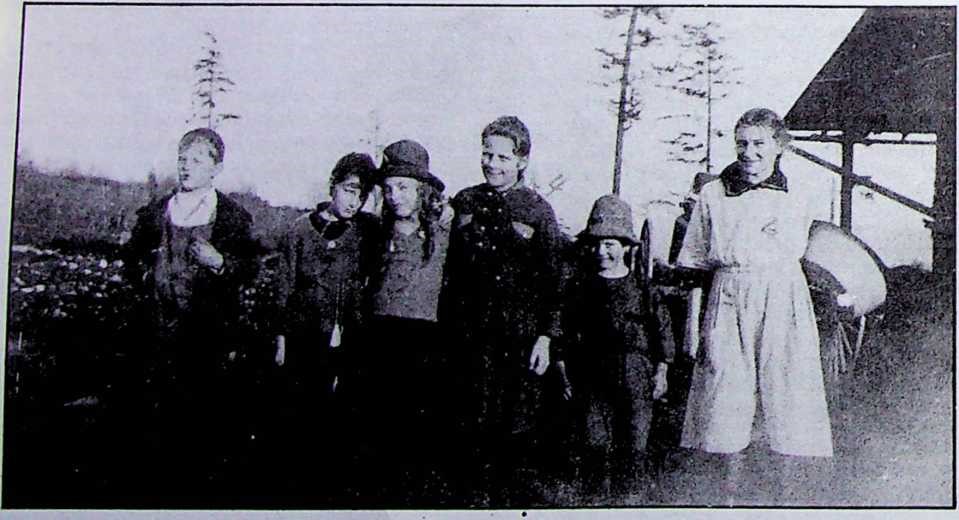 John would catch small fish and bring them up to Howard Hellman’s in exchange for eggs and butter.

The Hellmans built a house on Bailey road not far from its intersection with Jewett Road, and seven children were born to them there; Howard, Carl, Henry, Blanche, Hazel, William, and Gracia. For sixteen years, Edward and Eva developed their land, raised their children, and helped build the new community. Edward was one of the directors of the first school board for Ingleside school which he helped construct. Among their neighbors was the family of Denny Walters, whom Gracia married when they grew up.

Tragedy struck in 1916 when Edward died, leaving Eva as the bread-winner for her seven children, and her eldest son, Howard—who was then 12—as the man of the family. Howard started working at whatever jobs were available while his mother went to work as a cook on Puget Sound freighters.

Once again tragedy struck the family when the boat on which Eva was working sank. She went down with the ship and her body was never found. The youngest child Gracia, was still at a tender age and was taken to live with the W. O. French family, who raised her as their own.

The original house which Ed and Eva Hellman built upon their arrival at Cultus Bay was rented to a family named Elsie. The rental helped with the living expenses for the Hellman children, but bad luck struck again in 1920 when the house caught fire from an overheated stove. Howard tells the following account:

“I was doing some work on the property when I smelled something burning. The cedar boards felt hot on the wall of the back porch; and when I opened the wall with an axe, flames shot out. Mrs. Elsie, who lived there at the time with her family, wanted to get the dinner out that she had just cooked. I told her that she better forget her dinner and save whatever is important because this house was going!

“We jerked her new stove out and the milk separator. Then the rifle and shotgun shells started going off and the house went fast.”

After the death of his parents, Howard worked long and hard at whatever jobs he could, including; loading dynamite at the Powder Dock, wading in fish oil at the “Stink Plant,” helping at the game preserve, and as a deck hand on various boats. Finally, he managed to save enough money to make a down payment on a 40-acre tract of land which was one of the three owned by the University of Washington. His brothers bought the other two tracts.

Howard paid $30 per acre for his property, a total of $1200 and, with great pride, went to Glendale and took a boat to the county seat at Coupeville to register his purchase. While he was there, he encountered Murdock McLeod of Langley, who was the proud possessor of a Model-T Ford. Murdock graciously invited the new property owner to save time by riding back to South Whidbey Island with him instead of having to stay over-night at Coupeville and catch the boat home on the next day. 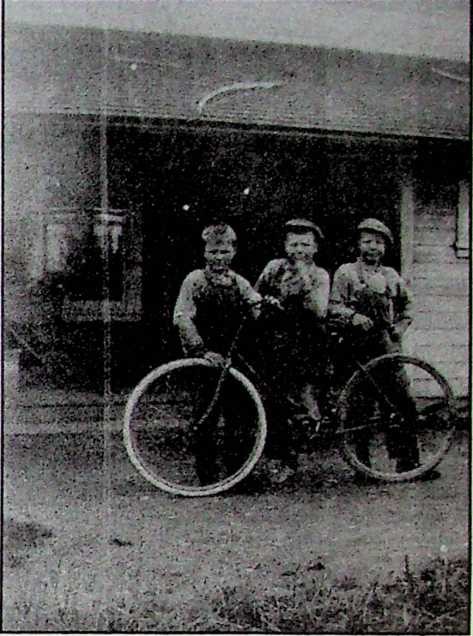 The idea was great but the execution proved to be somewhat faulty. By the time the auto had negotiated the uncertain road and they arrived in Langley, it was late evening. Howard stayed overnight with the McLeods and the next morning, caught the same boat to Glendale that he would have, had he remained in Coupeville overnight. From Glendale, he walked over the hill to the property of which he was the new owner. To help pay for his land, he worked for a time in the Bremerton navy yard, where he was vaccinated for small pox and nearly died. He recovered and worked many local jobs.

There was a holiday dance being held in December, 1927, to celebrate the opening of the new Bayview social hall, and Howard, along with practically all the other young folks in the community, attended. He quickly noticed that there was a new girl on the scene. She was pretty and lively and not at all averse to the attention he started giving her. The romance which was starting to flower was nipped in the bud when the young lady, whose name was Lillian Bodin, returned to her home in Saskatchewan, Canada, after the holiday season ended. She had been visiting her grandparents, the Julius Schumachers of Bayview. However, Cupid never has been one to let distance dull his darts.

Lillian soon found that the warmth of a certain young man’s ardor on South Whidbey, plus the warmth of the climate, nullified the doubtful charms of Saskatchewan’s 65 degrees below zero weather and she returned to the island. They were married on July 4, 1932, in Everett while a celebration with fireworks was going on. (They have always insisted their marriage started out with a bang even though Howard spent his last five dollars on the marriage license.)

When they returned home to the three-room cottage he had constructed on his property, they were practically broke. They had been given a cow as a wedding present and Lillian immediately started making butter and trading it for the staple groceries they needed to supplement what they could grow. 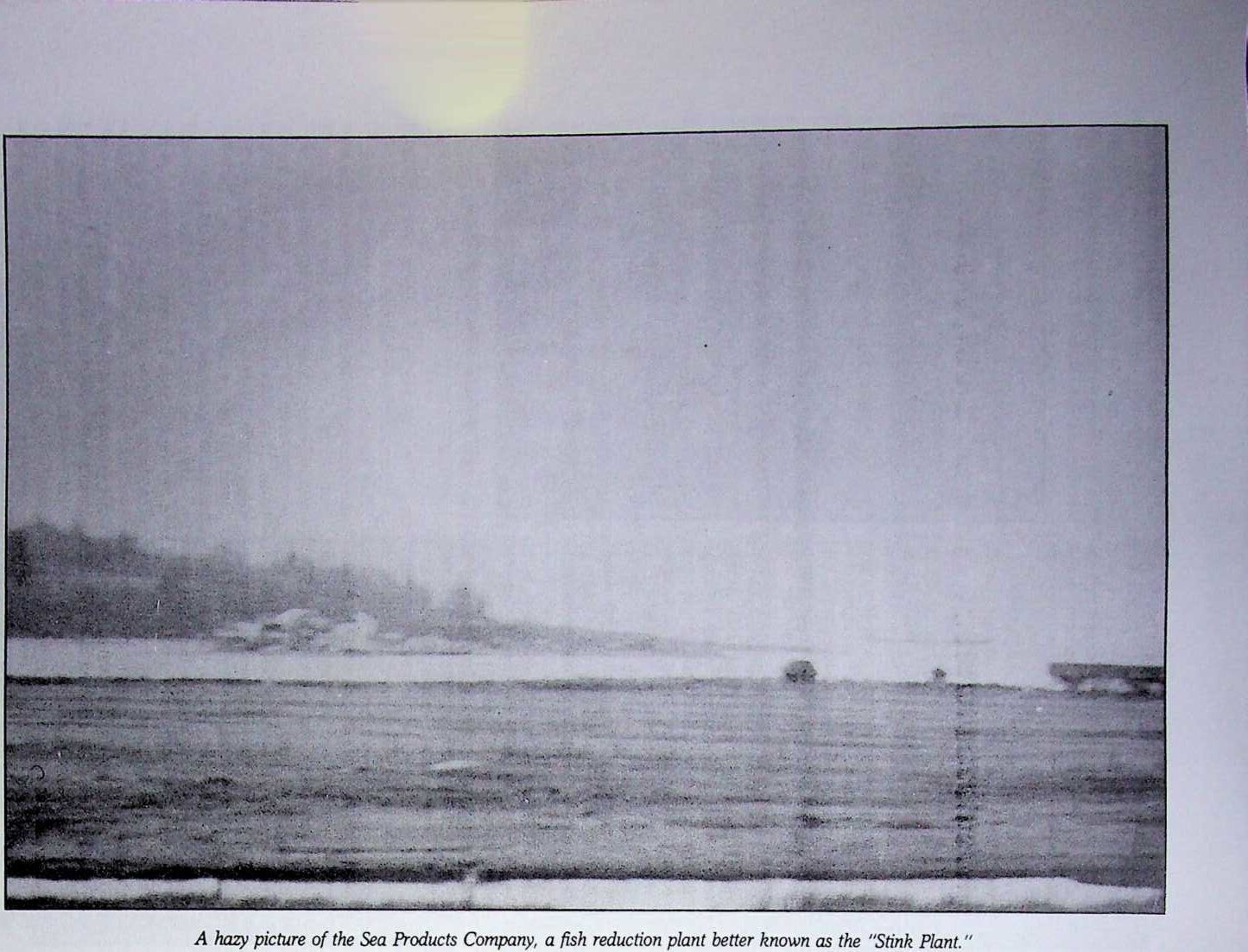 Their next step was to Start, what turned out to be, the largest turkey farm in the whole area. They began with one gobbler and six turkey hens, eventually increasing their flock to 1,000, which they processed and sold to Seattle and Everett restaurants and wholesale houses. They employed eight workers in their business, which lasted 18 years. Later, Howard worked for the ferry system—but the turkey buildings still stand on their property as a reminder of days past. Lillian was especially noted for her green thumb and a way with making plants thrive. Their home became a showplace of flowers, shrubs, and greenhouses which drew admiring visitors from all over, including the main-land. After they retired they became active members of South Whidbey Historical Society.