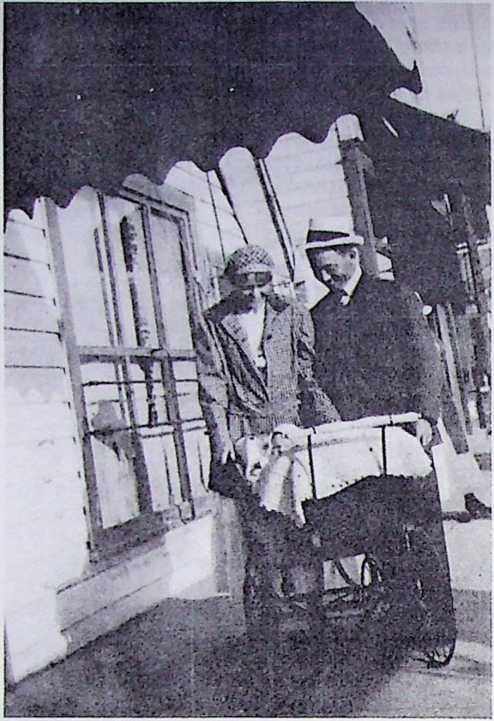 Claude and Caroline Johnson with daughter, Mildred (now Mrs. Stanley Dilatush) in 1921 just prior to their arrival in Langley.

When a pretty girl is born with a distinguished but unpronounceable name like Skjaelseadt it is not surprising that, when she grows up and selects a husband, not the least of his qualifications would be a name like Johnson.
Of course Caroline Skjaelseadt didn’t really choose Claude Johnson as her husband because of his name. Her parents already had simplified the Skjaelseadt problem by changing their name to Ericson when they arrived in America from Scandinavia, her father from Norway and her mother from Sweden.

As a matter of fact, Claude and Caroline were in Paradise when they met and although they left it for a time they returned to Paradise to be married. To begin at the beginning, Caroline was bom in Green Bay, Wisconsin the same year that Washington became a state, 1889. She was one of 10 children. In her late teens she taught school in Michigan for a time but love of adventure and rugged individualism were strong in her nature and when she was 21 she went to Paradise, Montana and homesteaded 90 acres, quite an unusual accomplishment for a young woman alone.

Besides running her ranch she rode horseback over a trail to teach school in a one room schoolhouse. It so happened that a young man named Claude Johnson was working for the railroad and was headquartered in Paradise. Dan Cupid went to work and the two young people were soon engaged. However, Uncle Sam stepped into the picture with a war on his hands, so Claude went into the service in World War One. Caroline moved to Washington, D.C. and worked in civil service while Claude was in the army. When he returned they went back to Paradise and were married in 1919, then moved to Bremerton where their daughter, Mildred was born.

In 1922, when Mildred was 18 months old, Claude received a promotion and was sent to Langley to take charge of the Standard Oil bulk plant on Wharf Street. Their son, Richard, was bom in 1924. When they first arrived in Langley they stayed at the Lenz Hotel on Third Street but after several moves they built an attractive home on nine acres at the edge of town on Saratoga Road. Their home became noted for beautiful flower gardens.

Claude and Caroline became active members of the Langley Methodist church and it was inevitable that Caroline, with her teaching ability, would become a Sunday School teacher. She had a class of fourth, fifth and sixth grade boys for several years and she remembers many present day grown men when they were mischievous boys in her class. She also served as church treasurer for many years.

At the time Caroline started teaching Sunday school Mrs. Ethel Manley, who was a member of Langley’s all-woman Council, was Sunday School superintendent as well as church organist and a music teacher. Young Richard was enrolled as one of her music pupils. The first time he left for his lesson his mother, with proper maternal concern for cleanliness, asked him if he had washed his ears. He solemnly replied, “I washed the one on the side next to Mrs. Manley.”

Caroline not only taught Sunday School but also was a teacher for 12 years in the Langley school, at one time having 59 pupils in her sixth grade class. When the principal finally took nine people from the class they came back to her room a week later and asked to be returned to her class. “She was a natural teacher”, her son Richard declares.

Claude retired from the Standard Oil business in 1940. He died in 1964. Caroline remained in her Saratoga home until early in 1980 when her health began to fail. She then moved into a cottage near the site of the former Standard Oil company holdings. The property had been acquired by the Johnsons from the Langley Dock Company, of which Claude was a member, when it dissolved in 1939. The cottage adjoins the homes of her two children Mildred Johnson Dilatush and Richard Johnson. Caroline was honored by the Methodist Church in June, 1986 on the occasion of her 98th birthday. For the past year, due to failing health, she has resided in Island Care Center in Freeland.

Both of the Johnson children, Mildred and Richard, graduated from Langley High School and attended Washington State College (now University). While there Mildred met a young man from Alberta, Canada, Stanley Dilatush. A college romance developed and they were married in December, 1942. Stanley became an air controller for the United States government and after serving in several areas of the country they finally were stationed in California for 16 years prior to Stanley’s retirement in 1974. During all of the years they had maintained their connections with Langley, building a beach cabin on part of the original Johnson property on the waterfront in 1953 and spending their vacation each year there. When Stanley retired they enlarged the cabin into an attractive home and have made their home there since being active in Langley’s civic affairs. Stanley served as a City Councilman, among other activities. They have two children, Colleen Yoder of Seattle, and Connie Marcucci of Long Beach, California who has three children.

Richard Johnson went into the United States Air Force during the Second World War before finishing his college work at Washington State College. In 1946 he married Loma Dotson, who, with her parents, spent her summers at their summer cottage at Bell’s Beach. Richard attended the University of Washington for a time, then became purchasing agent for the University, a position he held for 30 years. Like his sister, Richard had maintained his interest in Langley during the years, and had built a summer home on the Johnson waterfront property in 1949. Upon his retirement in 1981 they remodeled the house and made it their permanent home. Richard and Lorna have two children, son Jay, who lives with his wife Karen and their son in Seattle, daughter Nancy Lee who resides with her husband, Jay Lee and their two daughters in Lake Stevens. Richard has been actively engaged in Langley civic affairs since his retirement, serving as a volunteer fireman, having served on the City Council. Also over the years he has been an officer in the Boy Scout Council.