Phil Simon’s two launches, the Captor and the Caprice. Fora small fee he took people on picnics or trips around the Sound. The rowboat in the foreground of the photo probably belonged to “Blackie” Anderson. (Photo presented through the courtesy of Ester Moe.

He was just an ordinary man, unpolished, given to straight talk and to smoking a pipe; not the sort at first glance whom one would expect to be immortalized by having a waterfront park dedicated to him, but that is what happened to Phil Simon. He was noted for many things during his sojourn in early day Langley but perhaps the highest accolade that he received was the statement by his neighbors, “He was a good man.”

He was also a versatile man, his talents ranging through being an electrician, a boatman, a newspaper distributor, a tavern operator, a waterfront developer, an ice cream vendor, a husband and the father of two musically talented daughters, and a son.

The record of his activities in Langley begins in 1914 when he started a gravity feed water system by drawing water from the stream which flowed across Saratoga Street west of town. On February 15, 1916 he took over the Whidbey Electric system from E. Wood and set up a generating plant on waterfront property next to his home near Langley dock. Under his management the system prospered and he ex-tended the service to Bay view and Sunlight Beach and also installed street lights in the town of Langley. He operated the Whidbey Electric system for 16 years, selling out to Puget Power and Light in 1930.

In the meantime he also owned and operated two pleasure launches, the Captor and Caprice each of which would hold between 15 and 20 people. These boats were much in demand for picnic parties to Camano and Hat Islands. Hewas especially popular with young people. On at least one occasion, the summer of 1921, he had to make two trips with both boats from Langley to Hat Island and back to ferry a large group of high school students on an outing the day after school closed for the summer. Claude and Esther Furman, teen-agers at the time, trusted him with the secret of their planned elopement in 1917 when they engaged him to ferry them across to Everett to elude two sets of irate parents.
For many years he operated the Sea Breeze Tavern and Confectionery Store on the Langley dock. The place was equally popular with young and old. Ice cream cones could be purchased for a nickel.

In 1929 when the ferry service between Langley and Everett was discontinued Phil Simon was one of the Town business men who formed the Langley Dock Company to preserve the dock and develop the waterfront. He ran the following ad in the Whidbey Record at the time the Town constructed its new dock in the early 1940s.

After he sold his electric light company in 1930 he became the local PI newspaper distributor for several years. In his later years, in the 1950s he occasionally worked for the commercial evergreen packing plant located across from his waterfront home where Barney Hein’s Langley Marina is now. He made boxes in which to pack the greenery according to Lloyd Smith who was plant manager at that time. 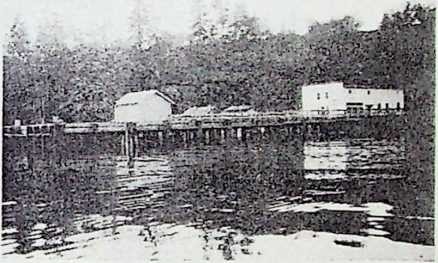 Phil and his wife were the parents of two daughters, Evelyn and Eleanor, and a son, Phil Jr. An article in the March 11, 1976 Whidbey Record titled “A Glance Into the Past”, gives an account of the Simon girls’ musical talents.
These photographs are of Langley and were probably taken shortly after the end of World War I. They were found in a collection of photographs being compiled at the Langley City Hall.

With the photos was an undated clipping from an unidentified newspaper, which concerned two of the people in these photos, Evelyn and Eleanor Simon. The clipping, indicative of a different style of life and journalism, reads:
A large part of last week’s correspondence was written on board the Clatawa and one sheet was missing in which mention was made of the duet sung by Phil Simon’s little daughters, Evelyn and Eleanor, who sang “Let the Rest of the World Go By,” at the reception given for Mr. and Mrs. McLend. As an encore they sang “Where is my Little Dog Gone,” Evelyn playing the piano accompaniment. These little singers are very popular.

On the reverse of the side of the clipping is this item: Prosecuting Attorney J. C. Richards and Sheriff Wm. Gookins were attending to official business in Everett Wednesday. Mrs. Richards accompanied her husband to the city to do some shopping.

Evelyn Simon also used her musical talents, we are told, to accompany the silent movies shown weekends on the second floor of the Dog House Tavern building.

Mrs. Simon died when the girls were in their late teens and their son was in high school. Phil Simon died January 4, 1959 and is buried in Bayview cemetery.

A portion of the Langley waterfront which originally belonged to Phil Simon has been set aside as a park by the City and is called Phil Simon Memorial Park.

Bill McGinnis, Langley pioneer who ran a column in the South Whidbey Record in 1985, wrote an interesting account of his personal acquaintance with Phil Simon. Phil Simon came chugging into the dock from Mukilteo in his little launch, ‘Caprice,’ one day towing three row boats. He settled into the house at the end of the wharf where he spent the rest of his working days.

He was a hustler and soon had a float for his boats and was renting them out. He used the four passenger Caprice for short charter trips. He next bought the Captor which could comfortably carry twenty passengers out of the rain and wind. He sold gas and oil from drums on the pier and opened a little store nearby. He picked up crushed shell from Baby Island which he sold to the egg farmers. When Mr. Woods sold the electric plant, Phil bought it and, until he got the diesel engine set up by the dock, he used the old wood-burning cannery boiler to run the generator. 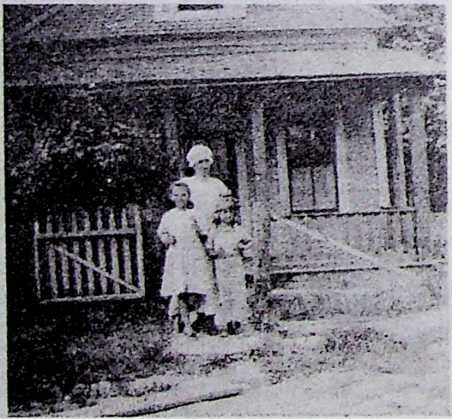 SIMON SISTERS — The daughters of Phil Simon with their mother in front of their house on the Langley waterfront. Although it does not appear in the reproduction, the original print shows the girls holding ice cream. At the left, the girls are shown in parade costumes in which they advertised their father’s businesses.

When I was twelve, he built a fine twelve-foot row boat for me. He took me on many of his charter trips to quarter master for him. On one trip to Everett, it was pretty rough, blowing down hard from the northwest. Phil figured to get around the Point and from Clinton, try to sneak across.

The waves were big and they were slewing her stem around pretty bad. Nils Anderson was one of the charter fares. Phil was a little worried as the Captor was being driven too close in to the Mukilteo-Everett light. “Put’er in the trough!” yelled Nils above the engine noise. Phil saw Nils and looked surprised. ‘‘Go ahead, put’er in the trough.” Phil spun the wheel and our troubles were over. We went right across with just a little easy roll. Nils grinned and made his way back to the passenger cabin.

Phil had a pretty wife, two pretty young daughters; Evelyn and Eleanor and later, Phil Junior. I think Phil Simon was probably the best friend I had in Langley.