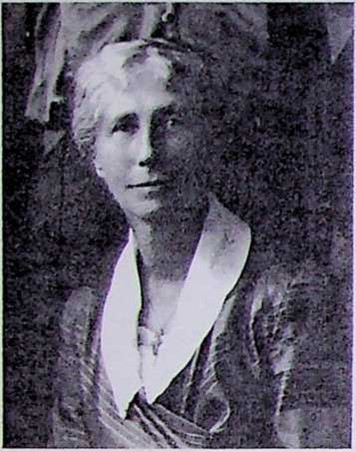 In 1858 a baby girl was born in a town in Minnesota who was destined to play an out-standing role in the development of a tiny, new town thousands of miles away on an island in Duget Sound. That baby was Helen B. Coe.

She grew up to be a lady of culture and distinction and was a teacher. Time has cloud- id the reason that Helen Coe crossed half a continent to settle in Langley about 1896. The 1900 census shows that she had living with her Lillian Kelsey, a 33 year old seamstress from England. In due time several other relatives arrived to share the attractive home and 10 acres which she had purchased west of Langley bet-ween the high bank waterfront and Saratoga Road. There was her sister-in-law, Mrs. Alice Rollit Coe, also a niece and her husband, Margaret and Peter Camfferman.

In the rugged frontier life that characterized Langley around 1900 Helen Coe’s home was an oasis of refinement which she graciously shared with the tiny community. In the memoirs, “My First Days In Langley”, Mabel Anthes, daughter of Jacob and Leafy Anthes, gives an interesting account of the part Miss Coe and her family played in the life of youngsters in the community.

“During that period I looked forward to Sunday mornings when Mother dressed me in a clean apron and a brown-checked sunbonnet and sent me to the home of Mrs. Alice Rollit Coe (a sister- in-law of Miss Helen B. Coe, author of “Fir and Foam”), who taught her two children, Winifred and Rollit, my sister Cora and me to sing “Jesus Loves Me This I Know” and “Onward Christian Soldiers”.

“Once or twice a month during 1896-8 the three Anthes children were invited to “tea parties” given by Miss Helen B. Coe and Miss Lillian D. Kelsey, both of whom had taught kindergarten before coming to Langley to live. We learned to make fans and sailboats of colored paper. Their home was an interesting place with furniture made from driftwood.
“On one occasion Miss Helen Coe consented to substitute for our teacher at school. We became restless one afternoon and Miss Coe instructed us to stand, throw out our arms and pretend we were little birds. This pleased the little tots but disgusted the older boys who swung themselves up into the rafters like monkeys, and there they lay sprawled out swinging their arms and legs. From that time on the big boys made themselves obnoxious. They pushed each other over the stove and woodpile, and one morning succeeded in pushing the stove over onto the floor. There was a great skirmish and a lot of angry words. The school board decided to employ a man teacher.”

Enid McGinnis Mackie, who was Langley Town Clerk for several years, recalls that in her childhood she and her grandmother, Lillian Wylie, were sometimes invited to lunch at the Coe home. The luncheon table would be impeccably set with fine linen, china, silver and crystal.

In December, 1919, when an all-woman Council was chosen by the townsfolks to run Langley, Helen Coe was elected mayor. She served until March 7, 1922.

(Editor’s note: see page 24 in this Volume under “Langley Incorporates”.)
She remained active in town affairs throughout her life. In 1926 she was instrumental in getting the town to create a footpath from Second Street and the Saratoga Bridge to First Street. When Jacob Anthes donated the land overlooking the sea and mountains at the corner of Cascade and Second Streets for a library, Helen Coe donated $500 toward a building and was active in getting the library established.

David McLeod worked for Miss Coe as a teenager, helping care for her yard and acreage.
“She was a lovely lady”, David recalls, “gracious, conservative and a pleasure to work for. Once she visited in England for almost a year. When I married in 1936 she gave me a set of Gorham silver teaspoons and when she died she willed me a complete set of Shakespeare’s work which I still have.”

David and his wife, Georgia McLeod, have provided the following information regarding Miss Coe’s gravesite in Langley cemetery. It is marked with a headstone with a bird-feeder insert and the words, ‘‘Please feed my friends.” Helen Coe died in 1940. In her family plot are Helen R. Gove, (a niece) 1884-1956; Peter Camfferman, 1890-1957; Margaret Camfferman, 1881-1964.