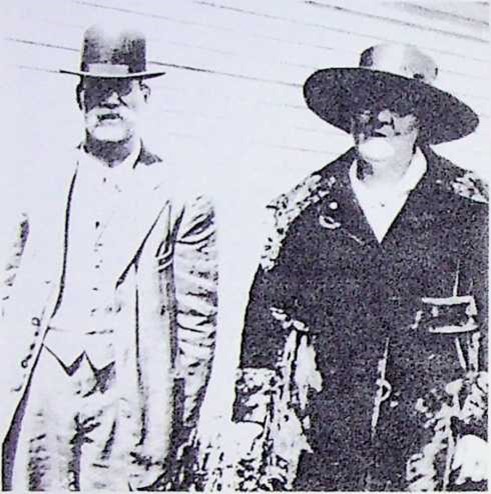 Jacob and Ava Brehm. Photo taken prior to his death
in 1920. Jacob established a livery stable in Langley
in 1904. (Photo courtesy of Vincent Brehm)

The youngsters of early day Langley knew Jacob and Ava Brehm as “Grandpa” and “Grandma”. The business community knew Jacob as the owner of the livery stable on First street, and Ava as the lady who made everybody feel welcome at her home in the field just east of the Methodist church and who always kept a bowl of freshly sliced onions ready for nibbling. The farmers in Langley’s outlying area knew “Big Jake” as the jolly German who was not adverse to taking a nip of the cup that cheers as he made his rounds with horse and wagon collecting their cans of cream which he took to the Langley dock and shipped to an Everett creamery.

Five year old Vincent Brehm knew his “Grampa Jake” as the man who could fix anything, even fingers which had been chopped off one’s hand and lay on the ground. His reason for knowing this would have been funny if it hadn’t been so serious.

Vincent was one of the six children of Gus and Susan Brehm, who had come from Oregon in 1910 to be near Gus’s parents Jacob and Ava Brehm. Little Vince, as he was known, was sup-posed to be helping his brother Victor, who was almost seven, chop and carry in firewood for the kitchen stove. 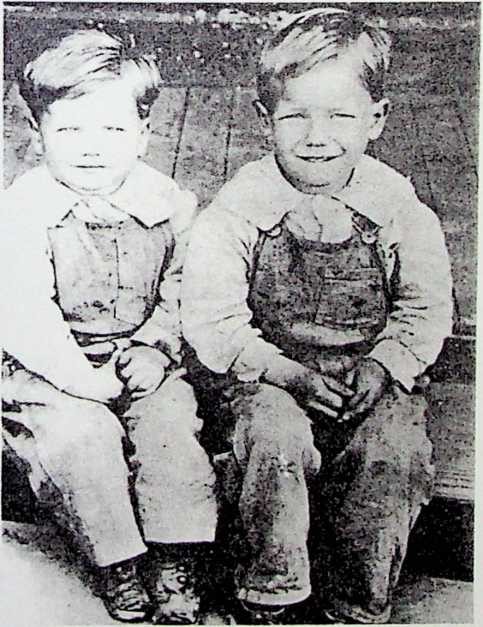 Victor and Vincent Brehm, sons of Gus and Susan
Brehm, grandsons of Jacob and Ava Brehm. They had
a mishap on the chopping block. (See accompanying
story.) (Photo courtesy of Vincent Brehm)

As everyone knows, toting an armload of wood is not fun, but wielding a big ax and making the chips fly is real, he-man work. A squabble arose when five year old Vince demanded that seven year old Victor let him use the ax and Victor refused.

“If you put your hand on that chopping block I’ll chop off your fingers”, Victor warned. Vince dared him to do it and Victor did. Suddenly the astonished Vince saw the top half of one of his fingers fly off onto the ground, while two more were dangling by some skin.

Grandpa Brehm, who was the community horse doctor, was summoned. Quickly he put the dangling tops of the two fingers back in place and yelled, “Where is the top of the other finger?”

Lying on the ground, he was told. “Get it, and bring me some vaseline.” The finger top and the vaseline were quickly forthcoming and Grandpa Brehm carefully set the finger top back where it belonged, slathered all of the injured digets with vaseline then spit out the huge cud of tobacco he had been chewing and layered it over the vaseline. He placed a board under the fingers to keep them in place, then bandaged the whole works. 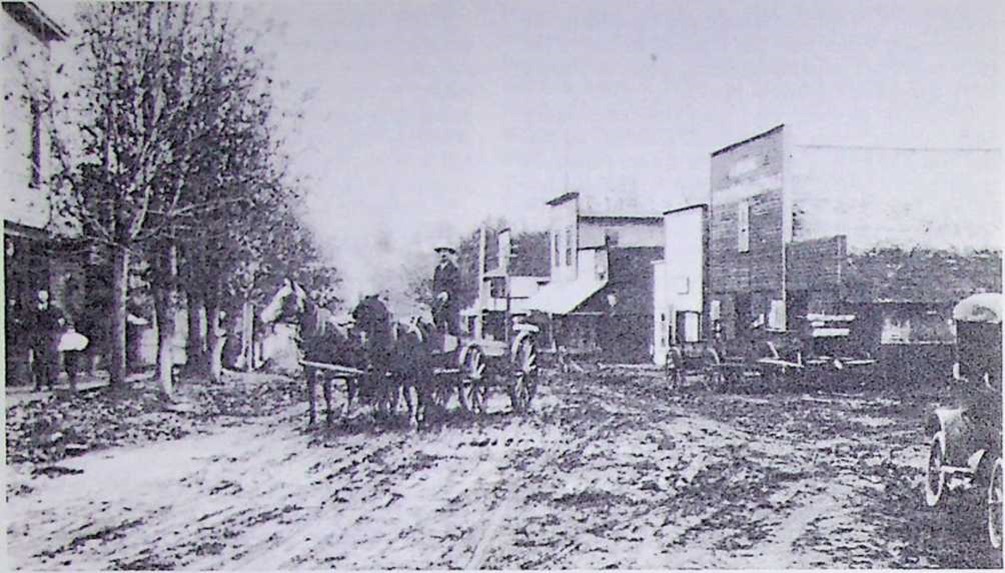 Jacob Brehm standing on a wagon in front of his livery stable in Langley about 1901. Standing on the sidewalk are his son, Gus Brehm and grandson, Vincent. (Photo courtesy of Vincent Brehm)

To everybody’s amazement, all of the fingers, including the severed one, healed and are still functioning on the hand of “Little Vince” who, in 1985 was 76 years old. Unfortunately, the fingers curl inward slightly because the board which supported them while they were healing didn’t quite reach their tips.

Jacob Brehm came by his flair for the dramatic quite naturally. His father, Johan Adam Brehm, was born in Coben-Saxony, Ger-many, at the time when 14 year-old boys were being drafted into military service. Like Jacob Anthes, Langley’s founder, Johan Adam and his brother, George left Germany and came to America to avoid the draft. 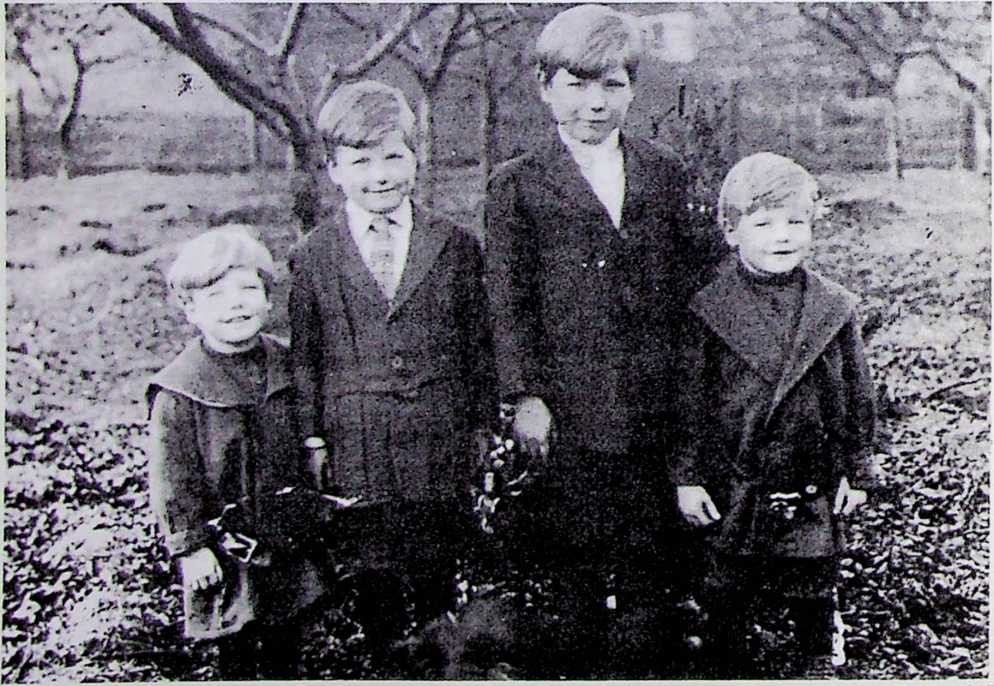 Albert, Vincent, Victor and Jack Brehm, in yard of the Jacob Brehm home (their grandparents) in Langley in 1915.

Eventually Johan Adam met a young lady from Prussia, Elizabeth Koontz. They were married and settled on a homestead in Kansas which they sold and moved west to Camas Prairie, Oregon, where they again homesteaded. They raised a sizeable family there, and each of their sons, of whom Jacob was one, took out homesteads of their own adjoining their father’s property. All but one of the sons Edward, moved away and Edward, who was a bachelor, finally became the owner of 5000 acres of Oregon range land.

Jacob, who had met and married Ava while still in Kansas, moved to Walla Walla where their son, Gus, was born, grew up, married Susan, and their six children were born there, Victor, Vincent, Vera, Jack, Albert and Vemice.
Jacob and Ava moved to Langley around 1904 and established their livery stable business on First Street. They also bought a family burial plot in the Langley cemetery and, when Jacob died in 1920, he was buried there. Although the remaining members of the Brehm family moved off the island, their bodies upon death were returned to the Langley cemetery plot for burial. 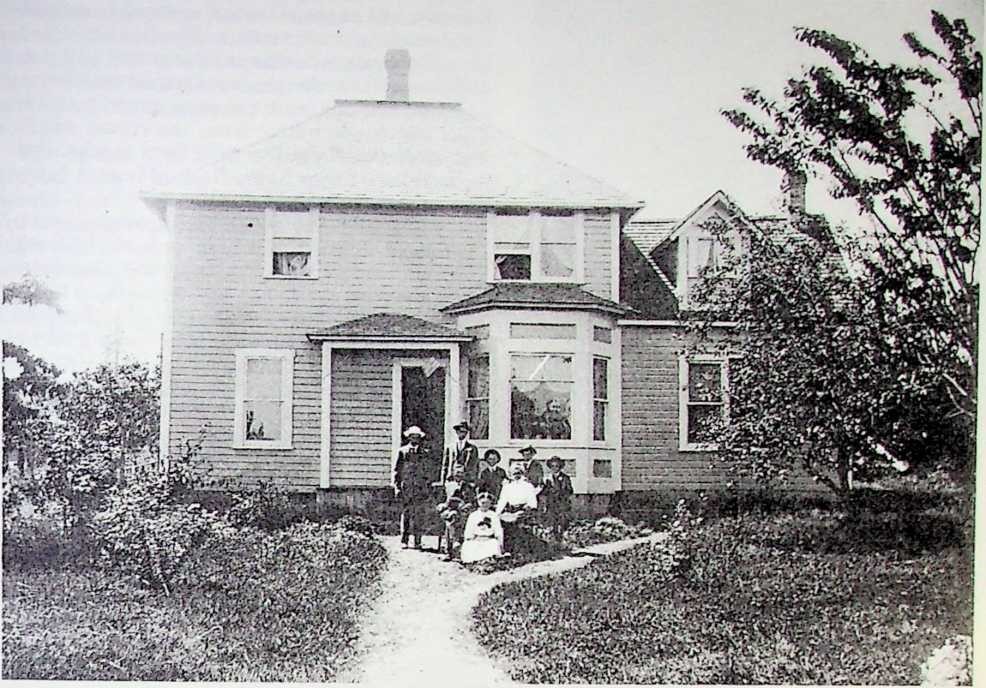 The Jensen family home at Sixth and Park Streets, in 1912 shortly after they bought it from Henry Bosshard.
Shown in the photo are Hans and wife, Cecelia and their children, Jake, Christine, Jens, Fred, Chris and CarL

As for Vincent, the boy with the mended fingers, his family moved to Vancouver, Washington where he grew up. In 1985 he and his wife reside in Leavenworth, where one of their daughters has been a librarian for several years. Their other daughter lives in Cashmere, and they all made a special visit to Langley in April, 1985, to renew old acquaintances.