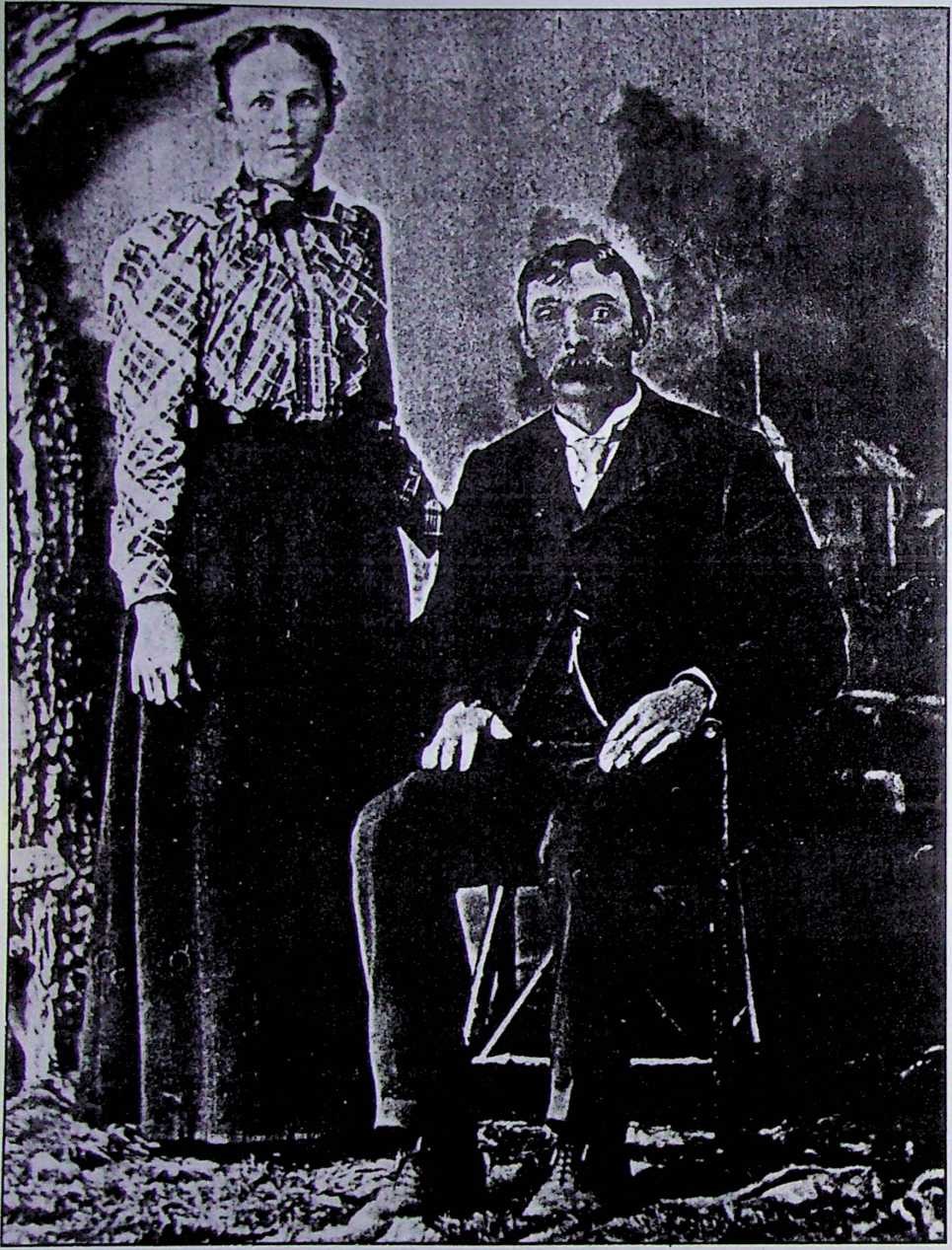 A music director was rehearsing his orchestra in Seattle on a summer evening in 1915. He raised his baton with a flourish and music gushed forth the brasses in full voice into a great crescendo; then gradually lowering his baton, he brought the music down to a gentle pianissimo all except one trumpet which continued to blast away at full volume. The director bristled. His hair fairly stood on end at such outrageous disregard of his leadership. He shook his baton indignantly at the young trumpet player who continued to blast away.

Then, he realized that the young man wasn’t watching him at all, but had his eyes fixed on the pretty young girl who was playing the cello, and who also happened to be the director’s daughter.

The director’s ire petered down to a sigh of resignation. He stopped the music and addressed the young man. “Leon Burley, from what I have heard in the past, you are a fairly good trumpet player, but from what I’m observing now, perhaps I should change this overture to a wedding march. It seems your interest in playing trumpet in my orchestra is motivated largely by the opportunity to be near my daughter Marie. In the name of reason, man, if you are going to court the girl, please do it on your own time, not in the middle of my overture.” 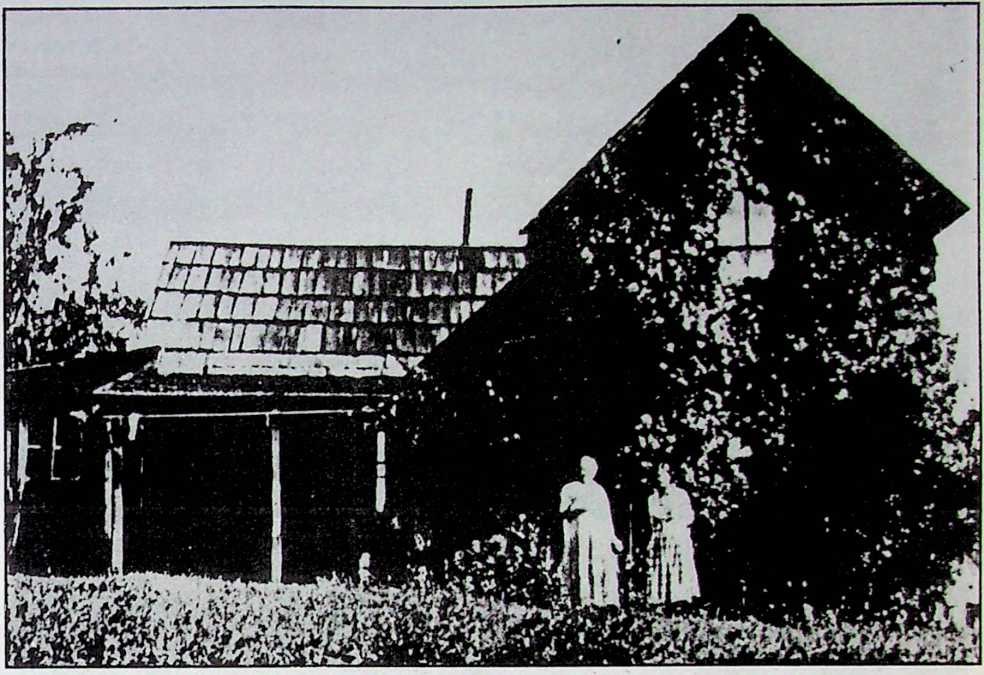 That’s how it happened that Leon Burley, who was 94 in November 1984, and Marie Phillips, now 90, became man and wife in June of 1916 in Seattle, and shortly thereafter moved to Maxwelton. Music brought them together, and it has played a large part of their lives over the years. In the 1930’s, Marie conducted a local orchestra which played for all the important social functions and for July 4 celebrations. Marie and Leon have been much in demand over the years at weddings and funerals and other public events, Leon as vocal soloist and Marie as his piano accompanist. She also taught music for many years. There is no better loved couple on South Whidbey Island than Marie and Leon Burley.
Their story begins back in Mayford Canada, when John Joseph Burley married Grace Mae Storch and, along with the Mackie family, left Canada in a covered wagon to come to the United States.

After a brief stop in Detroit, they continued on to Polk County, Nebraska, where they settled and remained for a few years. Leon, their first child, was born near Oceala, Nebraska, on November 18, 1891. Their other children were Vera, Glen, Loa, and Dean.

When Dean was ten, the family moved to the Ravenna district in Seattle where they were, once again, neighbors of their friends, the Mackies. Leon attended the University Heights grade school and Lincoln High School. When the Mackies left for Whidbey Island in 1905, the Burleys continued to live in Seattle for many years and Leon taught school while attending the University of Washington.

Neighbors of the Burleys in Ravenna were Mr. and Mrs. Henry J. Phillips who had a daughter, Marie, born in 1895 at the Puyallup Indian School near Tacoma where her father was school superintendent. He had previously served with the government Indian service in Wisconsin and South Dakota before being assigned to the Puyallup school. He retired from the service in 1909 and settled in Seattle where he indulged his deep interest in music by starting an orchestra. 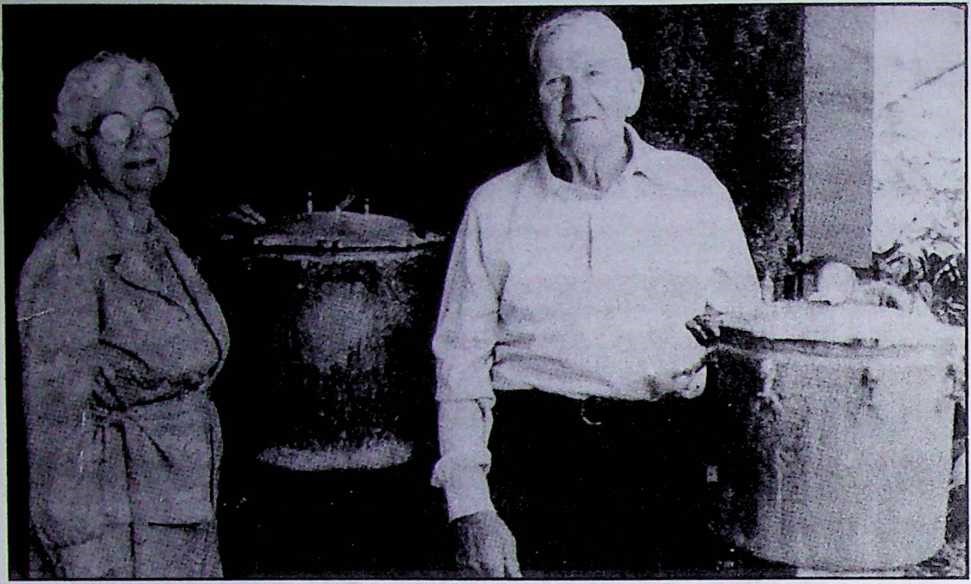 Quarts of food: Leon and Marie Burley with some of the Depression-era canning equipment from the Woodland Hall. —Photo published in Whidbey Record, 1982.

Leon Burley was also musically inclined and he joined the Phillips orchestra, playing the trumpet. He soon found that it wasn’t just Mr. Phillips’ orchestra in which he was interested, but also his daughter Marie, whose great grandfather on her mother’s side was William Pickering, a good friend of Abraham Lincoln, and the fifth territorial governor of Washington in the 1860’s. Governor Pickering is best remembered for being instrumental in passing an act which took the jurisdiction over divorces away from the legislature and placed it in the hands of civil courts.

Marie Phillips and Leon Burley were married in June of 1916 and Leon continued his profession as a teacher for four years, during which time they became the parents of two children, Joyce and Robert. In the meantime, Leon’s parents had been prevailed upon by their friends, the Mackies, to move to Maxwelton where they lived until their deaths wiffim’^a few- day^-erf each” ulliei -m-4-he

By 1921, Leon haa tired of teaching and wanted to try his hand at farming. It was natural that Leon and Marie should turn to Whidbey Island as a place to farm. Not only were his parents retiring there, but the Burley’s had visited the Mackies every summer from 1905 on. In January of 1921, Leon and Marie moved to South Whidbey aboard the Calista which traveled to Seattle and back several times a week. Marie remembers that it was a difficult trip; it was very cold and there were two small children to take care of. She said that during one of the early winters on the island, it was so cold that the two boys pushed a canoe over the ice from Langley to Camano Island.

The Burleys lived on the Smith property for ten years before they bought their own land in 1931. There were still very few roads and it was a day’s journey to Coupeville on horseback. There was a dirt road to Clinton and one to Langley. They remember, too, that there was a steamer that came from Coupeville and made stops at Greenbank, Camano, Saratoga, Langley, and Sandy Point bringing supplies to the island.

At that time, there were still bears, deer, and elk on the south end of the island. Leon still has an elk antler from those days. Once, Mr. Montgomery shot a bear and shared some of it with the Burleys.

The Burleys, as well as their neighbors, were self-sufficient. They had cows and chickens, a good sized garden, and were able to get crabs, clams, and fish from the sound.

Leon and Marie acquired cows that furnished them with fresh milk and they sold what was left over to Darigold Creamery. Ran Erikson drove the truck for the Darigold dairy and picked up the milk. At that time, men came from the main-land to buy cattle, and there were regular auctions at Marysville. Everett was also a market for meat. Leon remembers selling veal in Everett at the rate of fourteen cents a pound. They also took meat to the Seattle markets.

One of Leon Burley’s early jobs soon after arriving on the island was to drive the school bus to Langley and back. His salary for the school year (September to May) was $76.

Their main source of news was from The Seattle Star—a newspaper which came to the island daily until the paper was discontinued.

Later in the 1920’s, Marie, who had inherited her father’s love of music and the ability to play the piano and other instruments, got about 25 people together and they formed an orchestra. They rehearsed in the basement of the Methodist Church in Langley. Marie learned to play the violin at that time so that she could play the lead violin for the orchestra. They played at Woodland Hall for various occasions, PTA meetings, and other social affairs, but never for dances. 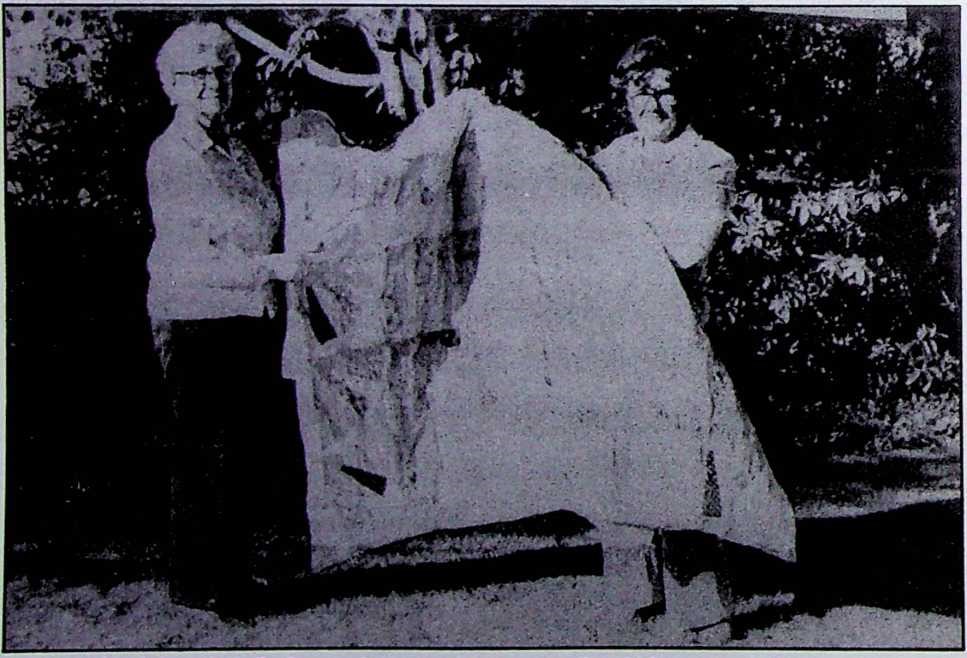 Marie Burley (left) and Phyllis Turner show one of the many quilts which were made by the “Neighbors’
Friends” club. Marie was one of the founders of the club.

During the great depression in the 1930’s, a young music teacher came to Whidbey Island, and through the Works Progress Administration (WPA), worked with the people in Maxwelton. He started not only a band, but a chorus at Woodland Hall. Two of the Burley children played in the band; Bob played the clarinet, and Richard the trombone. In the later 1930’s when the music teacher left, Marie took over the band and rehearsed and directed them. John Patton, Jr. played the flute. Sid Nourse played the saxophone, Ben Herring played the trombone, Ernest Noble played the saxophone, and Mrs. Carrington played the flute. They played for the Fourth of July parades and the women in Maxwelton got together and made uniforms for the band. The women wore white dresses with capes and the men wore white trousers.

Marie remembers one July 4 when there was an epidemic of measles and all the children were in bed—not much celebrating that year! Later on, there was an epidemic of whooping cough, and Marie and Leon’s daughter Janice was so ill that she developed black spots on her body. No one knew what to do for her. They finally got a doctor from Mukilteo to come over to the island, and he helped cure her.