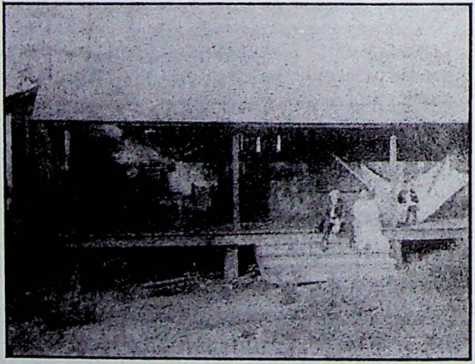 Frank and Margaret Salisbury and a neighbor seated on the steps of their first home near Maxwelton shortly after their marriage in 1911. The house later became the first home of Ran and Esther Erikson.

It was just a simple little item in the May 11, 1900 personals column of the Island County Times, but the import of the news it carried had a profound effect on the tiny town of Clinton. The item read, “H. B. Campbell, late owner of the Clinton Hotel property, left for Boston last Saturday.” Farther down in the paper, it said “Jonathan Salisbury, former hotel operator in Tacoma, took possession of the Clinton Hotel last week.”

For the next several years, Jonathan and Lucinda Salisbury and their grown sons Frank and Dallas played a prominent role in the business life of the community. The hotel was frequented by main-landers, especially the years when the Chatauqua at Maxwelton was being held. During the summers of 1909, 1910, and 1911, the Salisbury brothers—Frank and Dallas—would use a launch and barge to transport their hotel guests from Clinton to Maxwelton. It was on one of these trips that Frank met a pretty Everett school principal, Margaret Clark. The romance led to marriage. Their first home was a little house in the woods near Maxwelton. Frank operated a small shingle mill built over a creek on the property. In 1913 their son Clark was born. 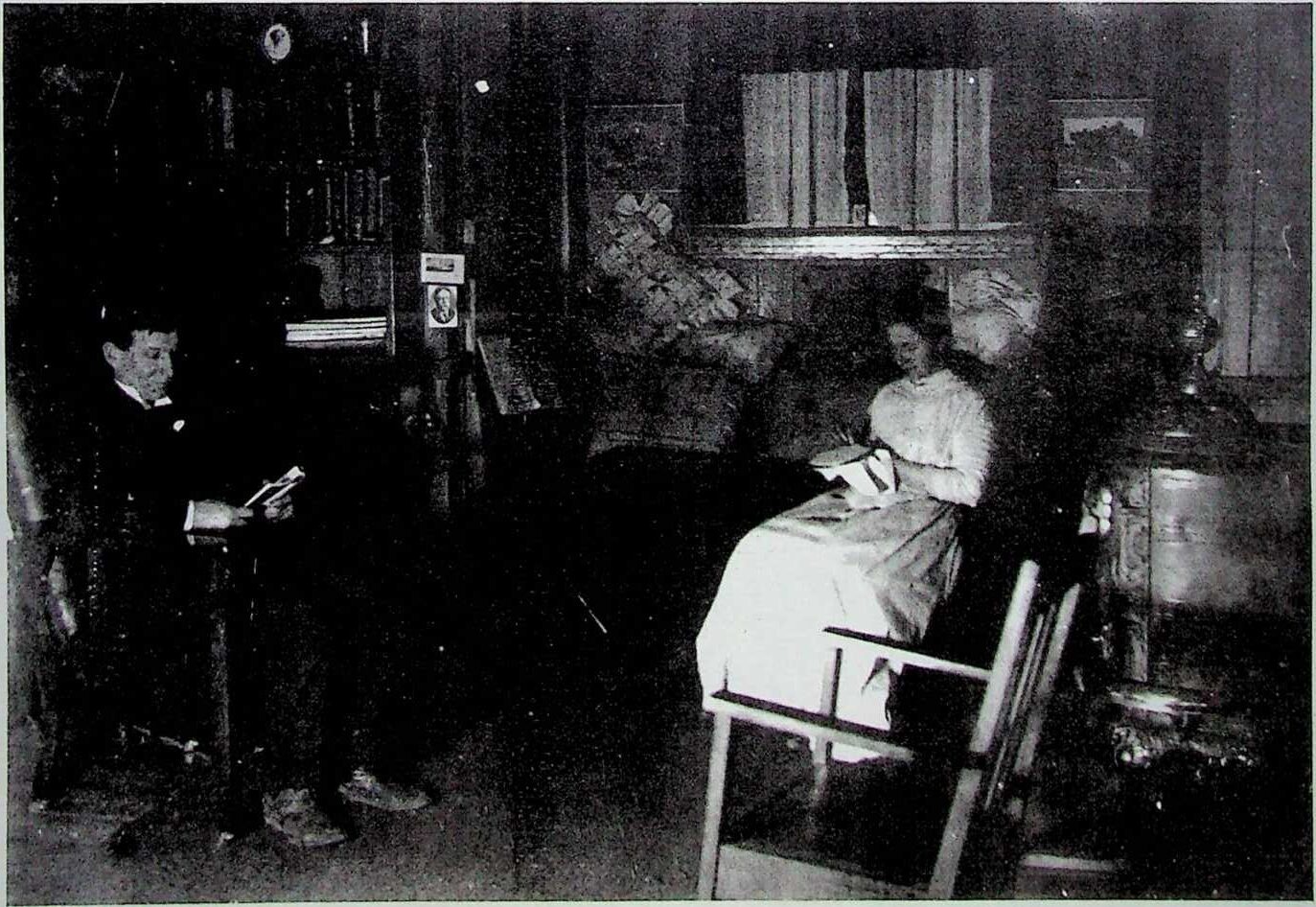 Circa 1911: Frank and Margaret Salisbury in living room of little house in the woods near Maxwelton.

In 1916, Frank and Margaret and three-year- old Clark moved to Clinton to live in the white house just north of the Presbyterian church. In later years, their little honeymoon house in the Maxwelton woods was moved to a new location, remodeled somewhat, and became the home of another couple, Randolph and Esther Erikson.

Frank transferred his mill operations and his home to the Clinton waterfront. He installed a stationary cut-off saw which could cut only six-foot bolts. These were delivered with a wagon. In about 1919, Frank sold the mill to Clarence Blair and Elbert Mounger. Shortly thereafter, Mounger sold his interest in the mill to George Jones. In 1920 the mill suffered a severe fire, but it was rebuilt and modernized with a swing cut-off saw, a log slip, and an adjacent boom site. Blair and Jones continued to operate the mill until the mid-1930’s.

Logging equipment of Frank Salisbury in 1919.

The vicinity of where the Waterman Mill was located in 1985. Frank hauled the logs to the chute on Wilkinson Road, near the 1985 site of Waterman Mill dock. He had other dump sites including one on Maxwelton beach. As his business expanded, he
exchanged his White truck for a chain-drive Mack. His driver was Bill McDonald. Bob McDonald ran the steam donkey engine; Alex McDonald worked in the woods cutting trees. (The McDonald family was among the pioneers of the area and their story is told in Volume 1.) The Salisbury family came west from Pennsylvania. Jonathan Salisbury was born in 1840 and died in 1916. His widow lived with her son Frank and his wife until her death in 1926. Jonathan and Lucinda are buried in Tacoma. Frank’s brother Dallas married in 1913. He built a new house for his bride farther down the beach just north of the Salisbury Hotel. But his wife Martha preferred city life. In 1919, they left the island. The house remained the property of the Salisbury family and later was taken over by Frank’s son Clark and his wife Isabelle. Clark attended the Clinton Scenic View School until it closed in 1921. Later, he resumed his over her large house on Rucker Avenue in Everett where Clark completed high school and later attended Whitman College and University of Washington. Clark and his wife Isabelle returned in 1942 to the Salisbury family home on Brighton Beach in Clinton which they had been maintaining as a summer home. 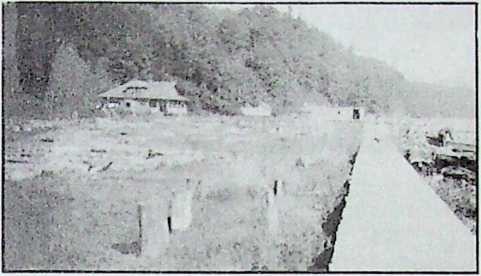 The large house on the left is the present home of Clark and Isabelle Salisbury. It was built in 1913 by Dallas Salisbury who later left the island with his wife Martha in 1919.

They made it their permanent home until 1948 while Clark worked for the ferry system. At that time, he recalls that ferry fare for a car and driver cost only 50c, and 20c for a passenger. During an upheaval in the ferry system and its transfer from private to county management in 1949, Clark and Isabelle returned to Everett, making their home on Grand Avenue while they raised their children. Clark worked for an Everett abstract and title company until his retirement to the Brighton Beach home in about 1975. Clark has been actively involved with the South Whidbey Historical Society during the 1980’s. He served on the board of directors and also as president.