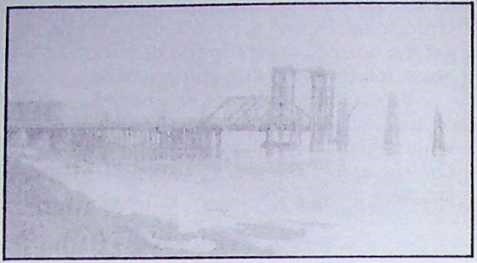 Ferry slip attached to the old Clinton dock circa 1924.

Young Tom Orr sat counting his money in the living room of the home of his relatives in Iowa. There was a lot of it. He had left his native Norway to seek his fortune in the United States, but never in his wildest dreams did he expect such a thing as an Alaska “gold rush” or that he would take part in it and come back with what seemed like a small fortune. What should he do with it? Part of that question was easy to answer. Enroute to and from the Alaska gold fields, Tom became fascinated with the Seattle area. He had friends—the Chris Bergs, who lived near Clinton on South Whidbey Island. What better way could he invest his money than in good land?

Thus, Tom Orr became the owner of a 360-acre farm on Humphrey Road south of Clinton. Orr Road, which intersects Humphrey Road, was named after him. In 1901, he married Bertha, a Norwegian-born young lady who was a sister of Mrs. Berg. She had been living with the Bergs since the death of her mother. Their daughter Bessie was born in November of 1902. In due time, four sons were added to the family—Alfred, Thorwald, Conrad, and Martin. Neighbors of the Orrs were the families of Andrew and Gilbert Olson, the Kingsleys, the Mellings, the Nichols, the Welches, and the Tony Petersons.

The Orr house was described by daughter Bessie as a “. . . good old-fashioned house. I was the only one who had a room of my own. We were comfortable. Being the only girl with four husky brothers, I was supposed to be lady-like and be mother’s helper—but I didn’t care one little bit for housework. I much preferred to be out in the fields pitching hay or clearing land. My father put me to work getting rid of the stumps left by loggers. He’d have me dig a hole on one side of a stump; then, he’d move me to the other side and dig. When the trench got big enough, we’d put a fire under the stump and burn it. We saved stump tops for firewood.”

In the beginning, his land was wooded, so Tom Orr purchased a steam donkey-engine to help clear it. Stumps were used to fuel the donkey engine. As soon as his land was cleared, Tom planted it with vegetables, fruit trees, and fodder crops to be used for sileage for the dairy cattle he had assembled. He also built a big barn. At first he had a milk delivery route around the island, but later he sold the milk to Darigold dairy. Tom would load milk and cream cans onto the wagon and drive down to the dock where the boat could pick up the milk cans for the dairy. Then he would buy groceries at the Clinton Union Store and haul them home. Flour and sugar were always purchased by the barrel.
Young people liked to walk down to the dock and the store after school—supposedly to get the mail—but since there was rural mail delivery, this was merely an excuse to do something interesting after school. Basket socials were another means of amusement for young people. Girls would put their best efforts into preparing a basket of delectable edibles to be sold to the highest masculine bidder. Romantic youths were frequently hard- pressed to decide whether to spend their money on the girl who had the best basket of goodies—or the girl who was the prettiest and most popular. The two were not always synonymous. Other entertainment included a dance hall on the beach, built by Bergquist. Occasionally, excitement other than dancing occurred. One time, the owners of the two rival private ferry boats, the Joyces and the Nearhoffs, engaged in a fist-fight outside the hall. Buggy rides were the recreation on weekends. On special occasions, there would be a trip to the west side of the island as far as Maxwelton almost the equivalent of a trip to Europe, with deeply rutted wagon trails being what they were. Baseball games always were a good source of entertainment.

Tom Orr was stubborn. As his daughter Bessie recalls, “My dad was once very ill with double pneumonia. We wanted to call a doctor, but dad refused. When the crisis was over and Dad was better, he allowed the doctor to come.”
Bessie recalls that one of her most embarrassing moments occurred during the year of the big snow in 1916. The snow must have been at least three feet deep, she recalls, and she decided to do what youngsters have been doing since snow was invented—lie down on their back, swing their arms back and forth and make a “snow angel.” Bessie was 14 at the time, and couldn’t get back up. Instead, she sank farther and farther into the deep snow. Finally, she had to call for her brothers to come and pull her out, to her mortification and to their amusement.

The year of 1916 was important to the Orr family in other ways besides the snow. They owned one of the very few automobiles around. That year, Tom Orr decided that even though she was a girl, Bessie should learn to drive their family car. Brother Al, who had learned to drive first, was completely disgusted; he objected to the whole idea. Ida Olson and Ted Helland helped her learn.

The year of 1916 was also the year that the Orrs acquired a telephone. Naturally, it was a party-line. When their phone would ring, everyone else on the line could—and often did—listen in. Bertha Orr and Grandma Helland enjoyed visiting on the phone each afternoon to exchange choice bits of gossip. When they discovered that youngsters on the line were listening in, they thwarted them by conversing in Norwegian.

Tom Orr was one of the founders of Saint Peter’s Lutheran church and the church formed an important part of the life of the Orr family. Women had weekly prayer meetings in their homes and always brought their children with them. Baby-sitters were unheard of. While mothers concentrated on Biblical matters, children concentrated on making candy, pulling taffy, and popping com.

One special outing to Maxwelton (when Bessie was a child) stands out in her memory because that is when she first met her future father-in-law, Joseph Mackie. Neither of them remotely suspected the significance of that meeting at the time. The Chatauqua was in full swing at Maxwelton with the famous evangelist Billy Sunday as its main attraction. In Clinton, the Joyce’s fishing boats were pressed into use as passenger boats and a large delegation of Clintonites sailed around Possession Point and Scatchet Head to Maxwelton. It was a big event. Everybody from South Whidbey seemed to be there. Picnics were the order of the day with much exchange of news among residents of the widely separated communities.

Among the friends engaged in conversation were Tom Orr and Joseph Mackie. Little Bessie Orr stood by listening intently, wondering how her father could be so well acquainted with someone who lived as far away from Clinton as Maxwelton. Years later Bessie herself was to become so well acquainted with the Mackies that she married their son Jim. In time, she presented her parents with three grandchildren—Sylvan, Marilyn, and Burrell. Jim Mackie died in the 1960’s. Bessie passed away in 1984. Tom and Bertha Orr’s son Conrad remained in Clinton where he and his wife Ardelle (Nourse) were still living on Brighton Beach in 1985. For many years, they operated the Clinton Whidbey Oil Sales business. Their daughter Myrna married a lad from Ireland—Sean Twomey. They also live in Clinton.