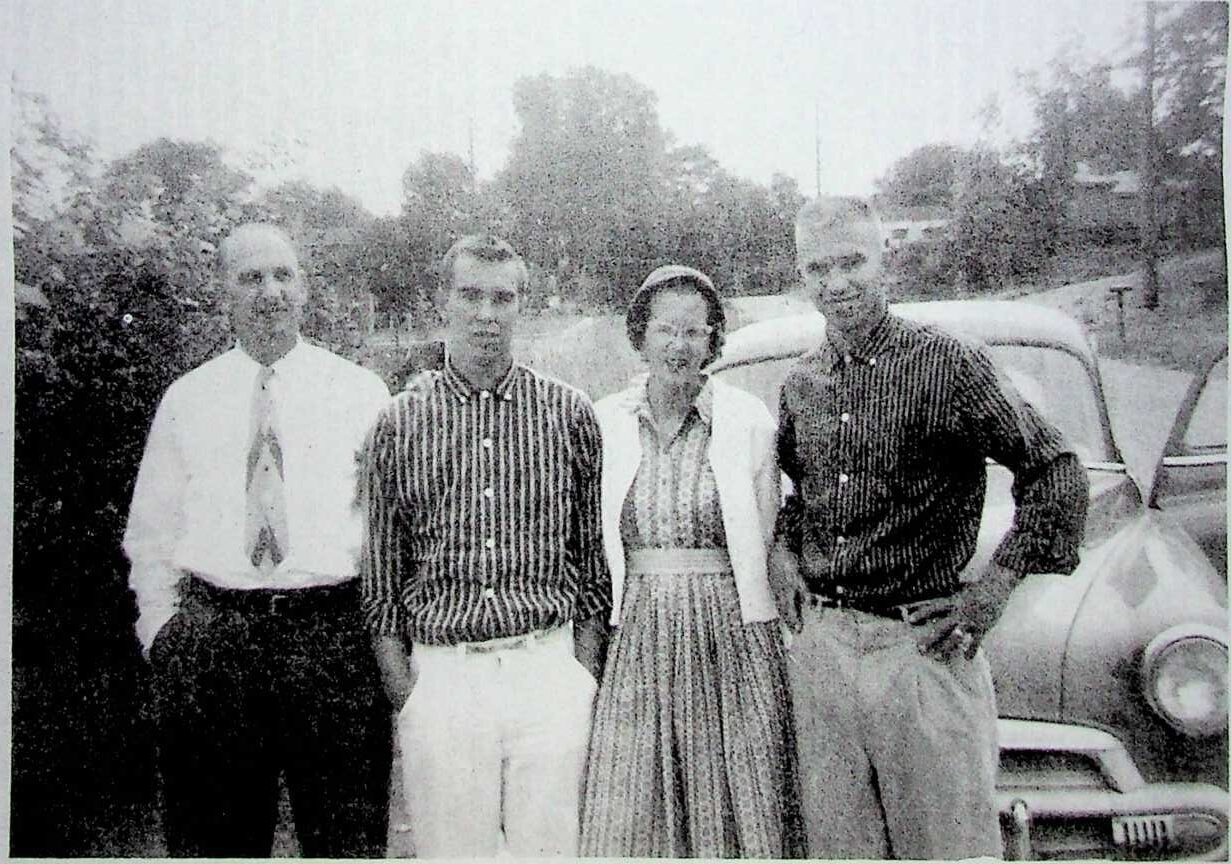 The Bergquist boys before joining the armed forces.

It was a miserably cold day. John Olaf Erikson, his wife Sofia, and their children were huddled around the stove in their home in Strandquist, Minnesota, wondering whether they had really improved their lot in life by leaving their native Bjurholm, Sweden. Then the letter came. It was from Erick Bergquist, their friend and former neighbor in Strandquist who had moved to a place called Clinton somewhere out west on an island. The letter described a place that sounded like a paradise and ended by saying that there was plenty of work if they wanted to come west and help in the shingle bolt logging operation that Bergquist had started.

John Olaf looked quizzically at his wife and wondered aloud if it would be wise to uproot their seven children to move to the remote island. He had no crystal ball that would enable him to look into the future to learn that one of his grandsons would be so honored that an entire community would dedicate a gymnasium to him at the handsome new high school. Or that a granddaughter would become an author and also a county official. He did know, however, that he should make a change and his friend’s letter provided the stimulus he needed.

In 1904, John Olaf and Sofia Erikson and their children Eugenia, Gustav, Ida, Emil, Bertil, Emalinda, and John Junior migrated to Clinton and settled on a farm near Deer Lake. John started working with the Bergquists in the shingle bolt logging operation. Soon John’s brother Gotthard Erikson followed him to the island and he, too, settled near Deer Lake. Back in Bjurholm, Sweden, another brother, Erik Gustav, caught the South Whidbey Island fever after receiving glowing re¬ports of their new home from his brothers.

In 1907, Erik Gustav and his wife Hilda joined his brothers on South Whidbey Island, settling on a farm near them in the Deer Lake area. However, Erik had changed his surname to Engstrom. His six children Hilding, Elvera, Elna, Arnold, Ernest, and Edna—grew up on South Whidbey as Engstroms.

Both the Erikson and Engstrom families have been involved with South Whidbey’s development over the years. They were honored in 1983 at the “Pioneers on Parade” program of the South Whidbey Historical Society. Their geneology was presented by Esther Erikson, widow of Randolph Erikson, who was John Olaf’s grandson. The family history, told by Esther, follows.

John Olaf and Sofia’s oldest daughter Eugenia and her husband Albin Hagglund moved down from Canada with their children Levoy, Roy, Alfred, Mildred, and Herman. A son was born in Clinton. Their daughter Mildred lives in Langley as do two granddaughters, Linda O’Sullivan and Dorothy Knapp, daughters of Mildred and Albert Anderson. The sons of Levoy and Maijorie Hagglund also live with their families on South Whidbey Island. They are Roy, Marion, Harold, and John. Their oldest son Albert lives in Sultan.

Gustav, John Olaf and Sofia’s son, married Helma Simmons; they had three girls—Marie, Thelma, and Betty. All were born and raised in the Clinton area. Gustav was the Clinton mail carrier for a number of years. Marie married Dewey Hoekstra and later married Leo Bevers. She died in 1983. Emil, one of the younger of John Olaf’s sons, married Hulda Skarberg in 1917. They had four children—Allen, Lester, Dorothy, and Darlene. They made their home in Clinton in the Deer Lake area for a number of years but moved to Edmonds, Washington in 1943.

Ida, one of John Olaf’s daughters, married Ernest Baker and moved to California. They had two children—Evelyn and Junius. Emilinda, another of John Olaf’s daughters, was the wife of Carl Conrad. She passed away in 1922. Bertil, the youngest of John Olaf’s children, married Una Campbell and lived in the Ingleside area of Cultus Bay, later moving to Deer Lake where they raised their two girls Berna and Theora. Bertil passed away in 1958 and Una in 1981
Gotthard Erikson and his wife Anna had three children, Ellen, Hannah and Gotthard. Anna passed away in 1905. Their son Gotthard died in 1909. In 1910, Gotthard and his two girls moved to Canada. Years later, he came back to the Island and bought a place in the Deer Lake area. He died in 1931. 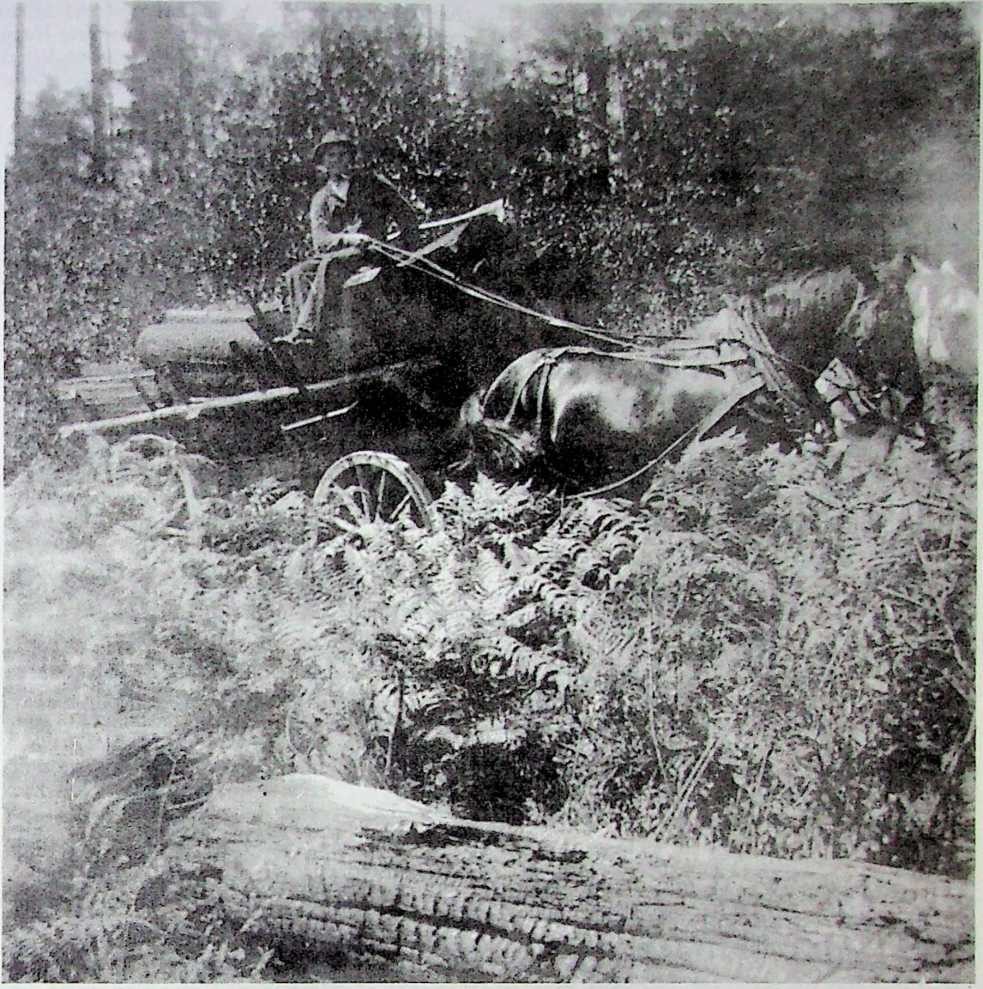 This picture was taken in 1908 in the woods behind the Bergquist home. This picture shows a driver haul¬ing shingle bolts with the Bergquist’s team of black and white horses—”Niger” and “Mike.”

The children of Erik Gustav and Hilda (Erikson) Engstrom were Hilding, Elvera, Elna, Arnold, Ernest, and Edna. Arnold married Belma Surface and they made their home at Deer Lake near his parents. There they raised their children Marlene, Mary, and Tom. Arnold and Belma still have their home there. The others now live in the Everett-Seattle area except Edna. Edna and her husband Gilbert Surface now live in Ephrata, Washington. Elma passed away in 1981 and her daughter Louise lives in the Deer Lake area. Hilda passed away in 1945 and Erik Gustav in 1953.

In June 1912, John Olaf and Sofia Erikson’s son, John Albin Erikson, joined together two pioneer families by his marriage to Feme Kingsley, whose parents, David and Minnie Kingsley, had settled in Clinton in 1902 with their children, Frank, Feme, Florence, and Cora. They had come from Summit City, Michigan and spent a year in Coupeville before moving to Clinton where they remained for a year and then left for a time but returned to make it their permanent home in 1907.

After their marriage, John Albin and Feme Erikson moved onto their farm in Deer Lake area, built a new house there, and made it their home for the remainder of their lives. John died in 1930; Feme in 1964. During his lifetime, John Albin worked in the Clinton Union Store and later drove school bus to the Langley school, They were the parents of three children—Randolph, Katherine, and Maijorie. Katherine married Jerry Fell in 1934. For a time, Jerry owned and operated a garage in Clinton. Eventually they moved to Enumclaw and then to Federal Way, South Seattle. They have three children. Maijorie married Richard Robbins in 1941; they had three children and settled in Puyallup. In 1962 they were both killed in an automobile accident.

Randolph Erikson, the only son of John and Feme, remained on South Whidbey Island and be-came one of its distinguished citizens. His widow, Esther Erikson, tells the story of his life.

“After graduating from high school, Ran went into partnership with Russell Anderson and bought the Midvale Store. In 1934, he married Esther Hamilton who had come to live with her brother Tommy Quinn and his family on the Collins and Green ranch at Ingleside on Cultus Bay. Russell sold his share of the partnership to Ran who later sold the store to Dewey and Marie Hoekstra. In 1937, Ran and Esther bought a farm at Maxwelton. It was here they raised their four children—John, Patricia (Pat), Sharon, and Gust. 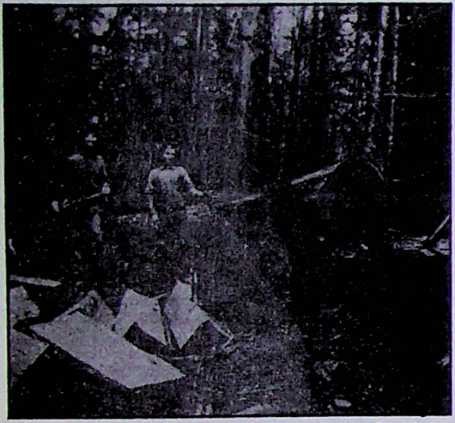 Ran worked in the woods with the Wildes, drove the milk truck for Darigold, then went into the television business full time with his store located at Whidbey City. Later, in 1972, he became the fire chief of South Whidbey Island. He retired in 1979. During his lifetime, Ran was involved in club and community activities. He was a school director for many years, and participated in Sunday school activities at Woodland Hall. He passed away in March, 1981.

His sons John and Gust have made their homes on South Whidbey Island. John married Janice Hedgecock; they have two girls Jodilyn and Jana. Gust married Cynthia (Cindy) Nourse; they have three children; Matthew, Tommy, and Katie.
Pat lives in Everett; Sharon and her husband George Moll live in Marysville with their two children—Erik and Melissa.