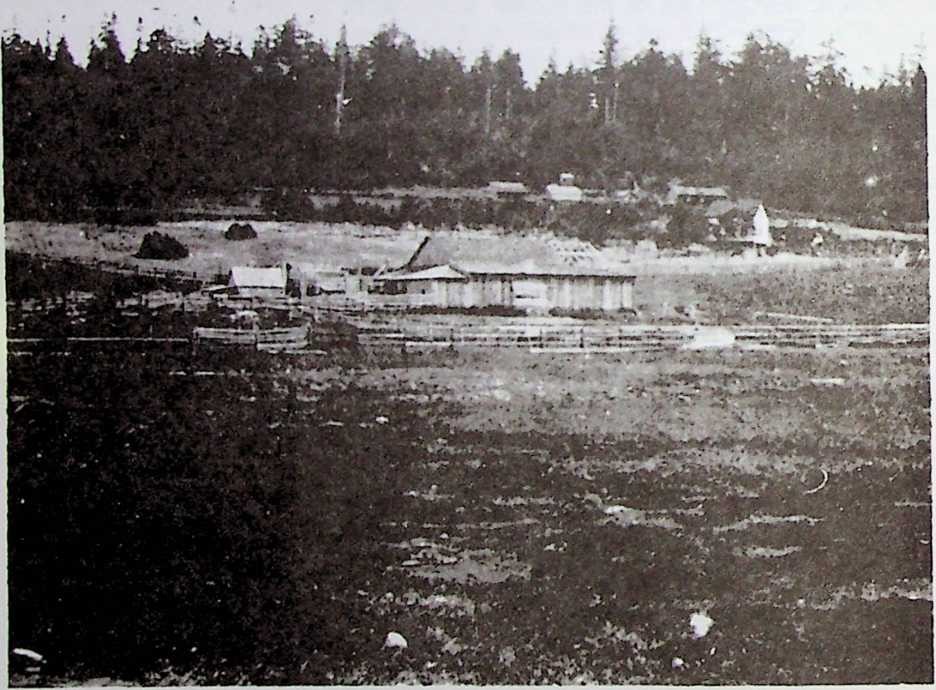 The Farmer family farm, with the Christian Madsen home in the upper backyard.

Woven into the tapestry of the lives of the settlers on the western shore of South Whidbey was a bright thread that gave a sort of continuity to the overall picture. That thread was provided by a sea captain, Christian Madsen, whose various ships. . .Thatcher, H. C. Page, and Letitia. . .were at one time or another during the two decades from 1865 to 1885 used by almost all the settlers on the shores of Mutiny Bay and Useless Bay. Included in his ships’ logs is a notation that he loaded hay from the Nathaniel Porter farm as early as 1869 and as late as 1886 he attended the funeral of William T. Johnson.

Christian Madsen was born in Denmark in January, 1832. At an early age he became a seaman and soon acquired his own ship. In 1857 he sailed his ship across the ocean, around The Horn and up the west coast of the United States to San Francisco. At that time San Francisco was involved in a building boom and lumber was needed not only for buildings but also for dock pilings. The virgin stands of timber on the Olympic Peninsula and South Whidbey provided an ideal source, and Madsen established a thriving shipping business transporting lumber from Washington Territory to California.

He maintained his southern headquarters in San Francisco. His northern base of operations was at Port Ludlow in the Lyons Hotel whose owner, Mike Lyons, also had timber land and a mill in the Maxwelton area of South Whidbey.

Until 1870 Madsen was strictly a seaman but that year be began leading a double life. In public he was a ship’s captain and apparently a bachelor but his private life, which he attempted to keep secret for several years, involved a wife, three step-children and a small farming project at South Whidbey’s Bush Point, then known as Willow Point. His wife was Emily Low, a Clallam Indian woman whose husband, a white man, had died and left her with three children, Tommy, Emily and Minnie.

Madsen established his new family at Willow Point in one of the longhouses in the Indian village there. He continued to live in Port Ludlow when not at sea or in San Francisco, but he made periodic visits to Willow Point, coming in a small sailing scow which he could moor on the beach while his large freighter was conspicuously berthed at Port Ludlow or Port Townsend. His diary shows several notations that he went to the “island camp” and mentions several activities of “Emily and Minnie and Tommy”. When he was on the island Madsen used the name, “Jim Brown”, which later evolved into “Jim Madsen.”

According to stories handed down in his family, Madsen was a poker player and, on at least one occasion, his skill paid him handsomely. As the story goes, he was involved in a poker game at Port Townsend in which he put up $1500 and won. The loser, a soldier whose name has been lost in the passage of time, had no money to pay his gambling debt. Instead he gave Madsen a deed to the entire area known as Willow Point (Bush Point) on South Whidbey. How the soldier came to own the land, if he really did, has never been clarified but Madsen took no chances. In 1881 he made sure of the title to his property by filing a pre-emption claim which was duly recorded in the county courthouse.

He built a large warehouse on his property clearly shown on a map included in an old abstract. He also built a cottage, 24 x 30 feet, containing two bedrooms, a large living room and a kitchen. He finally admitted to being a family man and, when the house was finished, he moved Emily and her children into the new home and set up regular housekeeping there, retiring shortly thereafter from the sea and devoting his energies to establishing a flourishing farm.

Apparently one of his first acts after he established his home was to sever his connections with the Indian longhouse. In the log of his schooner, H. C. Page, November 25, 1886, he wrote: “Madsen started taking down potlatch house at Bush Point; December 6, Potlatch house down; December 7, Potlatch house burned.” John McCurdy, writing in the Whidbey Record in 1978, quotes Ijess Davis as follows:

Indian tribes from all over the sound used to come to the point for a potlatch in the longhouse near where the old Bush Point boat house is now.

They would feast on deer, clams and salmon for days and have continuous bone games in that longhouse. When Jim Madsen had had enough of the noise and stuff, he went out and burned down the longhouse. He was just that kind of guy.