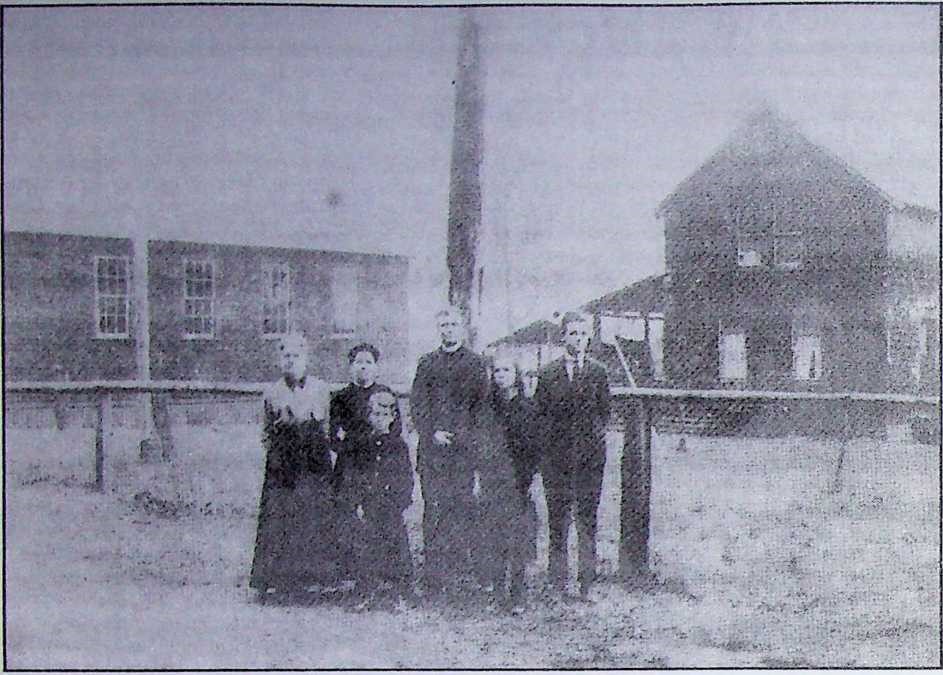 As pastor of the South Whidbey Free Methodist Church in 1915, F. L. DeLong stands (center) with members of his family in front of the church (left). The parsonage is on the right hand side of the photograph, with a trace of the old dirt Maxwelton Road showing in the front of the picture.

Soon after it was built, The Little Brown Church became the setting for an interesting romance. German born Henry Bohnke was the owner of 15 acres of farm land on Sills road above Maxwelton. He also was a lonely bachelor who had settled in South Whidbey in 1909 after roaming around the United States and working for a time in Everett for the Great Northern railroad.

Teen-ager Amelia Fiske was the new teacher at the little Phinney school on the beach south of Clinton. She was continually harassed because her ten pupils were mostly boys who were interested in punching each other and crawling through the school-house windows rather than in academic matters.

Henry and Amelia met at the Little Brown Church and almost immediately Henry fell in love. After a few preliminary romantic overtures he had reason to believe that Amelia might be willing to give up the doubtful delights of teaching for the joys of being a home-maker as his wife. However, he wanted to make just the right impression when he popped the question because Amelia’s parents—the Franklin Fiskes and their relatives, the Arthur Fiskes were important personages who had settled on Prosperity Ridge in 1908, Fiske Hill was named for the two families.

Henry was a skillful trumpet player and also had a flair for drama so, on a certain moonlight evening, Amelia and her family were startled to hear trumpet music out in their drive-way. Henry, in his best suit and with his head held high, was marching down the lane toward the house blasting out on his trumpet the tune, “Hold the Fort, I’m Coming.”
They were married in 1912 and Henry built a house which is still standing in 1985, the Conifers Tree Farm on Sills Road. Henry and Amelia became the parents of five children, David, George, Ralph, Eleanor, and Willis who was born in 1925 and is the only one of the children who has remained on South Whidbey. Henry died in 1952 and Amelia in 1968. George and Ralph also are dead. Amelia Bohnke lived almost 60 years in the house she entered as a bride.

Willis Bohnke attended the old Intervale School up to the third grade when all of the South Whidbey schools were formed into the consolidated school at Langley. The Intervale school building was torn down. The Second World War was at its height in 1943 when Willis was a senior in high school, so he left school to enter the navy. When he mustered out of the service he worked for a time at the Patton chicken farm. For the next 30 years he worked in civil service commuting to the navy base in Oak Harbor.

In 1956 he married Marie Holland of Everett and they purchased from Ray Howard the historic house on the corner of the Quigley and Bayview roads near Lone Lake. They are still living there in 1985. They have two children, Teresa, born in 1957 and Gordon, born in 1960. Teresa married Rich Norman and they have three children, Ruth, Virginia, and Cory. Gordon married Denise, a Bellingham girl. Willis is justly proud of the fact that in his own direct line five generations of Bohnkes, from his parents through to his grandchildren, have remained on South Whidbey Island. 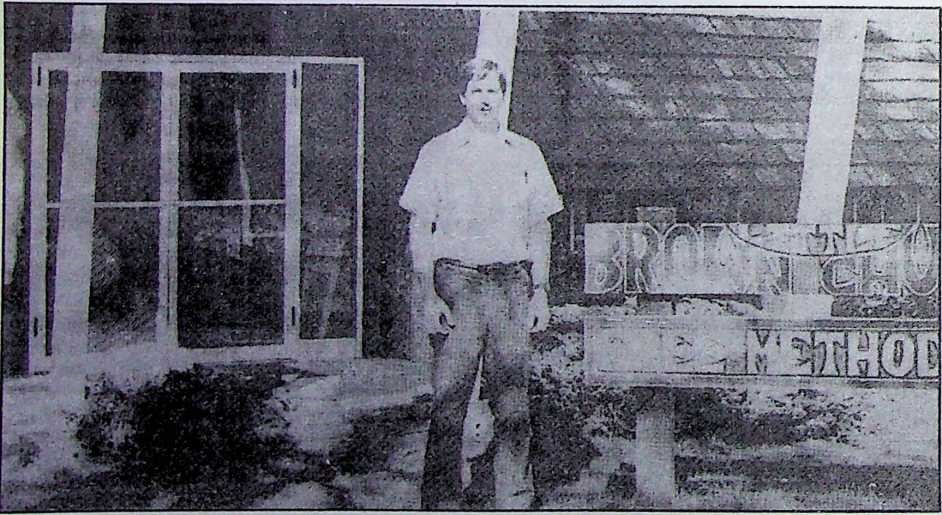 Pastor Dana Osborn stands in front of the “Little Brown Church” on Maxwelton and French roads.

There was a time, when Willis was five years old, that he not only nearly left Whidbey Island but also this world. He and his older sister were walking down the Sills road to the Hagglund place on an errand for their mother. In those days, the road was narrow, dusty, unpaved, and just wide enough to accommodate one auto. When cars met and needed to pass, one of them had to back up to a wide spot in the road. When people were walking down the road, they had to scramble up the bank on the road-side until the car had passed in a cloud of dust.

An auto came down the road where Willis and his sister were walking and they hopped up on the bank until it passed. Before the dust had cleared making the road visible, Willis hopped back down into the road bed directly in front of a second auto, a Model-T driven by Alfred Hagglund. The car had been following the first auto but had been obscured by the dust cloud. Fortunately Willis recovered without permanent injury.