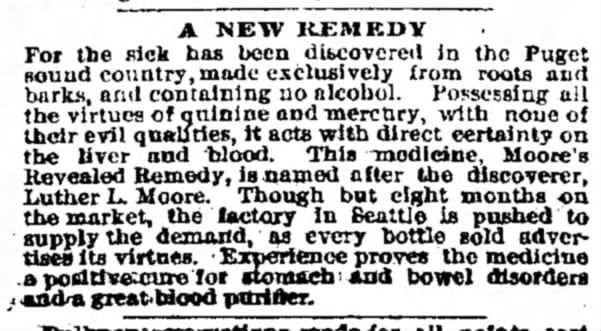 Imagine a natural remedy that would purify the blood and cure everything from asthma to venereal disease–including conditions in between such as ague, alcoholism, asthma, bowel problems, consumption, constipation, dyspepsia, scrofula, rheumatism, and ‘women’s troubles.’
Such were the claims of ’Moore’s Revealed Remedy,’ a Northwest-produced patent medicine of the mid-1880s until 1906 when the Pure Food and Drug Act prohibited patent medicines, many of which contained arsenic, mercury, alcohol, opium, and other ingredients that were often harmful.
* * *

Luther Moore was one of the earliest landowners on South Whidbey, purchasing three tracts of land in 1862 totaling 800 acres where Maxwelton exists today from the University Board of Commissioners. He used this land to harvest timber which was then floated to a mill at Port Ludlow.
(In 1870 Moore sold some of the land to Ellen Lyons who owned the Lyons Hotel in Port Ludlow. Her son Michael and his wife Mary established a home and logging operation there. The earliest known semblance of a South Whidbey school was in a log cabin located at the back of their home which the Lyons’ 10 children and two Bailey children attended).
Moore was born in Maine in 1828, but little is known about him until he ventured west and became a logger, first at Port Ludlow in 1860. He married his wife, Frances, in 1867 and had a son, William in 1868. Moore evidently worked in several logging camps, but his family lived in Port Townsend until 1879, when Frances is believed to have died.
Sometime during the period of 1863 to 1870, he established a small logging operation at Maxwelton, around the same time that Johnson, Oliver, Johns, and Deming were doing so a little farther up the island at Deer Lagoon and Useless Bay.
When Moore was logging at Port Ludlow in 1864, a log rolled back over him, leaving him in chronic pain afterwards. That is, until a remedy was ‘revealed’ to him by a spirit guide.
Spiritualism (contact with spirits of the dead) was a growing movement after reports of the Fox sisters in 1848 in Hydesville, NY and their communication with spirits through rappings and knocks. The girls became famous, and it is estimated that by the 1880s, there were 8 million people in the U.S. who identified as Spiritualists.
According to Moore, he and two fellow loggers were sitting around a table one night in camp when to amuse themselves they tried to initiate contact with the spirit world. It was then that Moore felt contacted by the spirit of the daughter of a doctor from Cincinnati, Ohio. She told him about this natural remedy made from spring water and three ingredients found in the forest, presumably roots and bark. Moore said that he was given the recipe and directions through auto-suggestive writing. 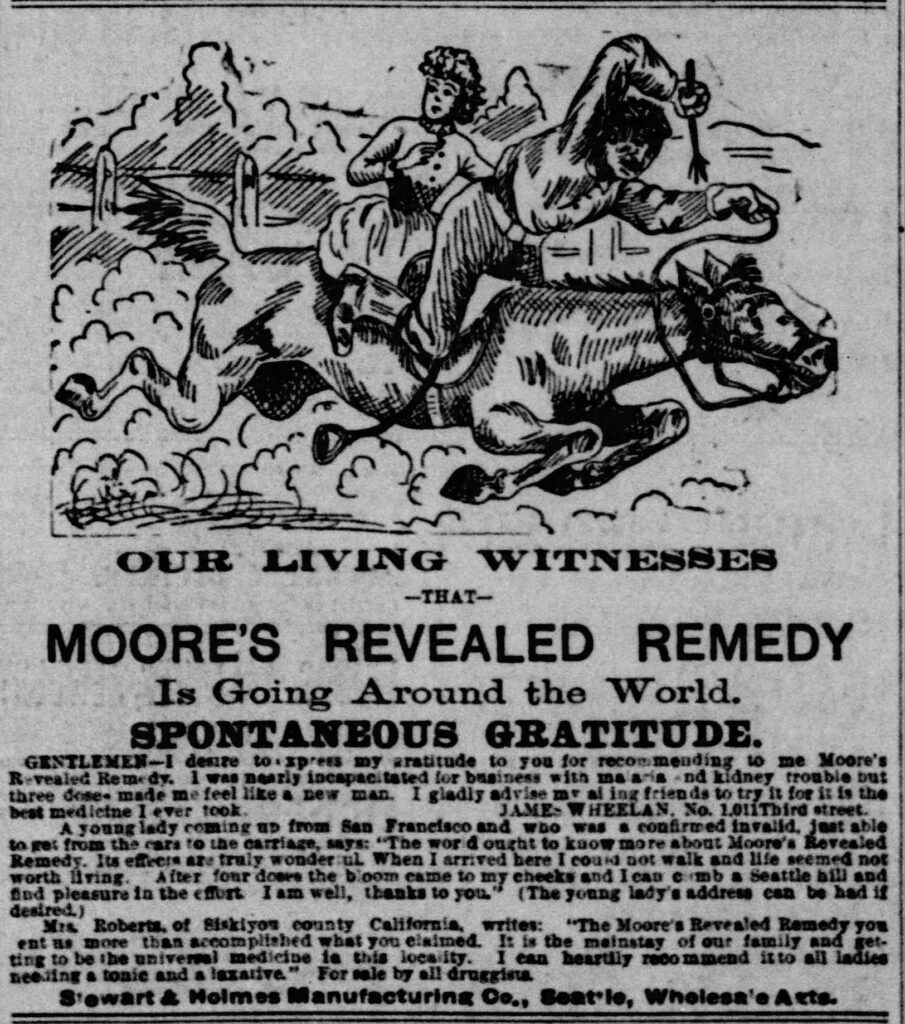 The concoction took four months to ‘age’ for consumption, and Moore claimed that it cured him of his pain, bowel problems, and a nagging cough.
In 1887 Moore undertook to start a company in Seattle, Moore Manufacturing Company, for the sole purpose of making and selling the product which he called ‘Moore’s Revealed Remedy.’
It sold for $1.25 per bottle and was wholesaled by the prominent drugstore chain of Stewart-Holmes Drug Company.
He hired a former railroad agent, William Van Waters, as his business manager and marketer. Van Waters produced circulars recounting the spiritism origins of the ‘revealed’ remedy and embarked on an ambitious campaign of testimonials and advertisements in many of the region’s newspapers. (See attached advertisements).

In 1888, an Oregon medical doctor, William Lysander Adams, wrote a book about the history of medicine, and devoted an entire chapter to debunking and mercilessly making fun of “Moore’s Revealed Remedy” and its spirit origins.
Despite this, the remedy sold very well, though its advertising budget ultimately put the company into arrears and in danger of bankruptcy.
Moore lost control of the company and it was sold in 1889 for $650 to Van Waters, who brokered a deal with the wholesaler to form a new manufacturing company of Stewart -Holmes Manufacturing Company for the purpose of producing Moore’s Revealed Remedy. It was incorporated in 1890 with $150,000 in capital stock.
Van Waters soon lost interest in the new venture and returned to working for the railroad. The remedy evidently did not work for him as he died in 1921 in a Seattle hotel room at age 60 of heart failure and was buried in a pauper’s grave at the county poor farm.
And what became of Luther Moore? According to his 1905 obituary, after losing his company, “…he drifted from bad to worse until he was penniless.” Though he died in Seattle, his body was taken to Port Townsend to be buried next to his wife in Laurel Grove Cemetery.
# # #
Here are links to articles and excerpts about Moore’s ReVealed remedy:
https://issuu.com/…/bottles_and_extras_march_-_april… – pages 38 through 43.
And Dr. Adam’s chapter 8, page 93 about the remedy:
https://www.google.com/…/History_of…/OsE0AQAAMAAJ…