Jonathan ‘Joc’ Salisbury was already in his mid-40s when he and his family headed west in 1889. They landed first in Tacoma, where they purchased a hotel to run, then headed up to Alaska in 1890 to set up accommodations for miners up there.
According to a family history on Ancestry.com Joc caught typhoid fever before leaving Alaska and upon his return to Tacoma his 24-year-old daughter contracted it and died in 1898 in Tacoma.
In 1900 the family moved to Old Clinton, now Brighton Beach. ‘Joc’ was 59 and his wife Lucinda, who went by her middle name ‘Clarissa’ was 49.
It was, quite literally, a “two-liner” announcement in the Island County Times of May 11, 1900 that drew them here: “ H.B. Campbell, late owner of the Clinton Hotel property, left for Boston last Saturday,” and further down, “Jonathan (and Lucinda) Salisbury, former hotel operator in Tacoma, took possession of the Clinton Hotel last week.” 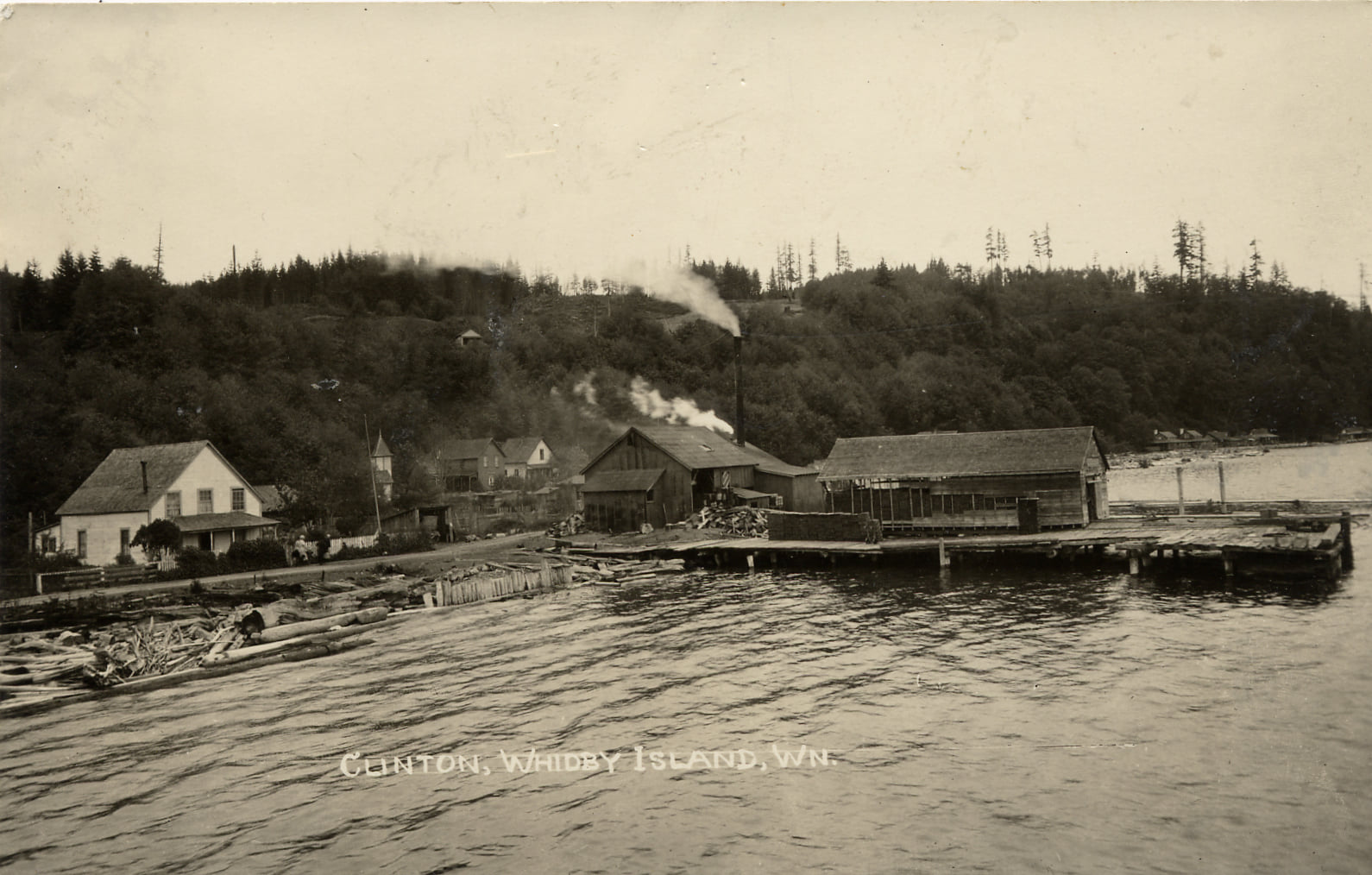 The Salisbury family operated the Clinton Hotel, and laterthe dock and shingle mill.

The Clinton Hotel proved popular for visitors of Chautauqua at Maxwelton, the annual cultural event which drew up to 5,000 tourists.
They would manage the hotel along with their grown sons, Frank and Dallas. During the summers of 1909, 1910 and 1911, Frank and Dallas could be seen ferrying those hotel guests attending Chautauqua from Clinton to Maxwelton in their launch.
On one of these Clinton-Maxwelton ferry trips, an attractive Everett school principal caught young Frank’s eye.
The romance between Margaret Clark and Frank Salisbury bloomed and blossomed into marriage. They started their new life together in a small house off Maxwelton near Franks’ shingle mill.
In 1916, Margaret and Frank, along with their 3-year-old son Clark, moved to a house just north of the Presbyterian Church in Clinton which had been built by Frank’s brother, Dallas. 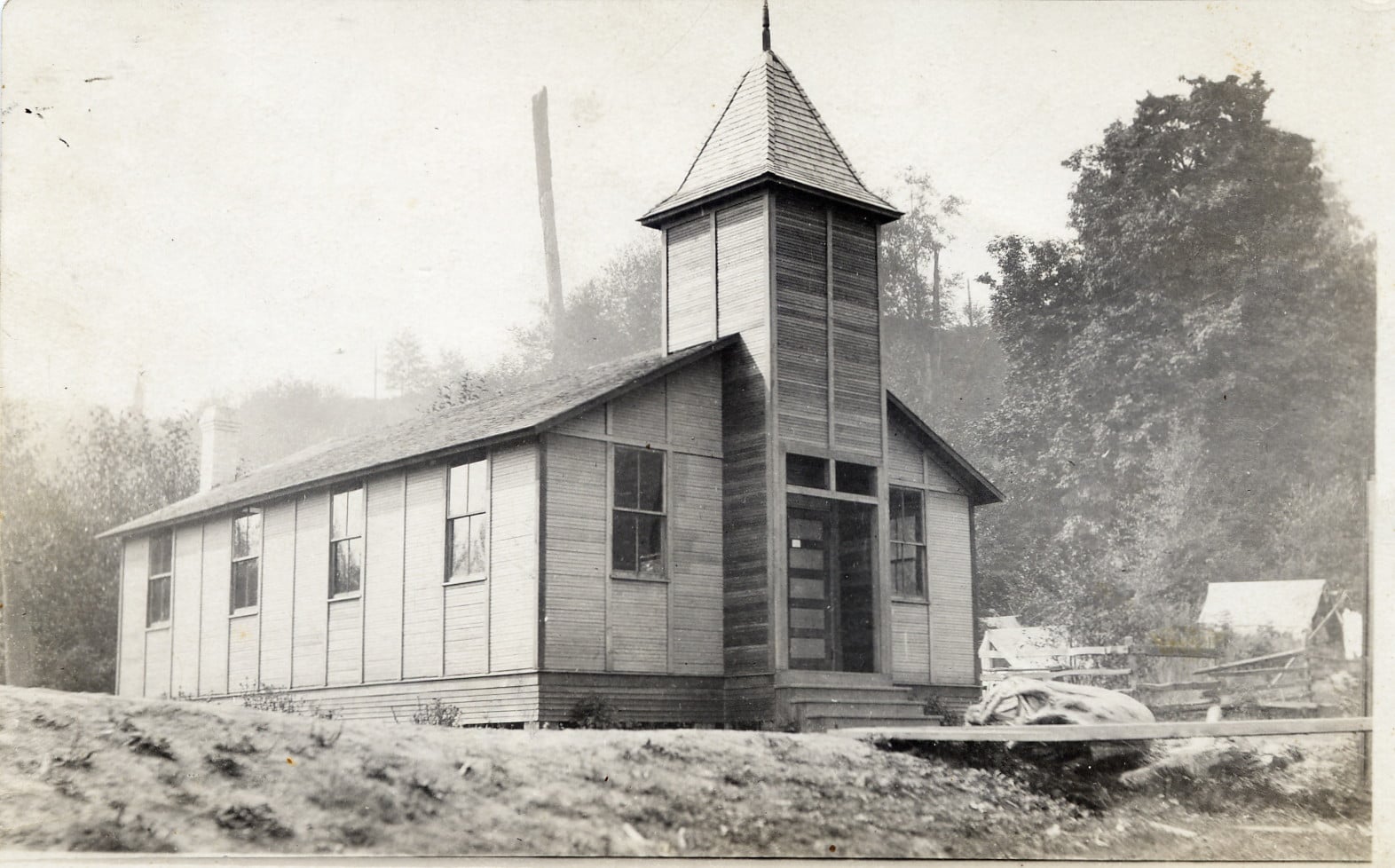 The Presbyterian Church in Clinton.

The Presbyterian Church was located at the base of Hinman Hill. Hinman Hill and the Hinman family home was located approximately half a mile down Bob Galbraith Road.*
Initially, Frank moved his shingle mill operations to what is now Brighton Beach, but then sold it and purchased a steam-driven donkey engine with logging truck.
Frank logged various properties near the Waterman Mill. His business grew successfully, and with success came expansion. He hired Alex, Bill and Bob McDonald to help with operations.
The year Frank and Margaret moved into Old Clinton, Joc passed away.
Clarissa (Lucinda) continued to live with Frank and Margaret until her passing in 1926.
Their son, Clark, split time between a home in Everett and the family home in Old Clinton and was instrumental in helping to organize the South Whidbey Historical Society in the 1980s and 1990s.