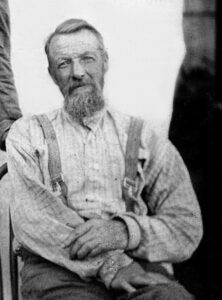 Thomas John Johns arrived as a 19-year-old on South Whidbey in 1859, shortly after Ed Oliver, but a little before William Johnson.

He was born New Year’s Eve 1840 in Plymouth, England, the son of a British sea captain. Young ‘Tommy’ as he was called, became a ship’s carpenter at age 17 and sailed the Mediterranean to Burma and possibly China.

After sailing around the tip of South America, John’s man-o-war ship put in four miles north of Victoria, B.C. on Vancouver Island.
He and nine other shipmates liked the look of the Pacific Northwest and decided to jump ship in the dead of night in a small boat. They rowed and landed at Dungeness, not far from Port Townsend.

They separated the next morning and the 5-foot 3-inch blue-eyed, blonde-haired wirey teenager headed south to Port Ludlow where he met Ed Oliver who was looking for a partner to log Deer Lagoon.

The partnership of felling and floating virgin forest logs to mills in Port Ludlow proved profitable and in 1872 when Queen Victoria granted a blanket pardon for Navy deserters, Johns was able to by land on the east side of Deer Lagoon near present day Bay View. 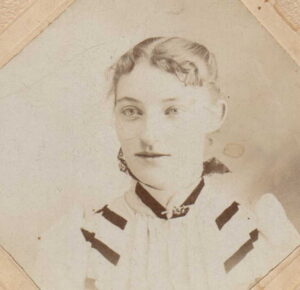 In 1878 he wed 26-year-old Iowa-born Mary Jane Coffelt on Lopez Island at her brother’s house. They had met while she was a waitress in Port Townsend. She had moved out to Washington with her mother after her father died.

The Johns made their home on the northwest edge of Deer Lagoon. A daughter, Florence, was born in 1879, followed by twin sons James Jasper and Richard William, though the nicknames Florence gave them – Jimmie and Willie – were what they went by.

All native and pioneer families faced hardships, and death was often close at hand in the small South Whidbey community, whether by accident or disease. 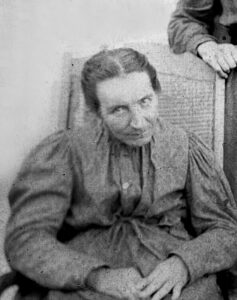 In late October 1899 the Johns twins took their small sloop just two miles south to a logging camp near the Clise Slough at Maxwelton to visit friends. A storm was coming, and they were urged to wait before returning, but decided to head home anyway.

The next morning Jimmie’s body was found on the beach. A call went out to neighbors for help. Thomas Johns heeded the call, only to find that the body was that of Willie. Walking a little farther north he found Jimmie.

Newspaper accounts speculate that the sloop capsized and the twins, both strong swimmers, made it to shore. Jimmie, the stronger of the two had carried his brother, Willie, until he no longer could and continued north along the beach, just about a half mile from their home. It is speculated that the boys died of exhaustion and exposure.

The whole South end mourned the loss to this pioneer family. The newspaper mentioned that both Thomas and Mary Jane were near invalids at the time; Thomas suffering from severe arthritis. They both died six years later in 1905 after having been cared for by their daughter Florence. 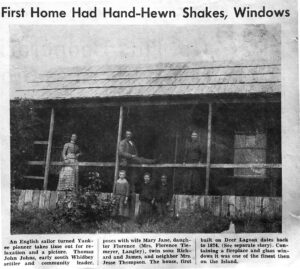 Before he died, Johns and neighbor William Weedin each donated an acre for the establishment of the Bayview Cemetery.

Years before they worked together to establish a school in the log cookhouse on the Weedin property in 1885 and helped build a log schoolhouse north of present Bayview School in 1891. 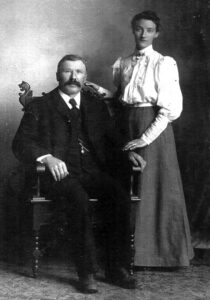