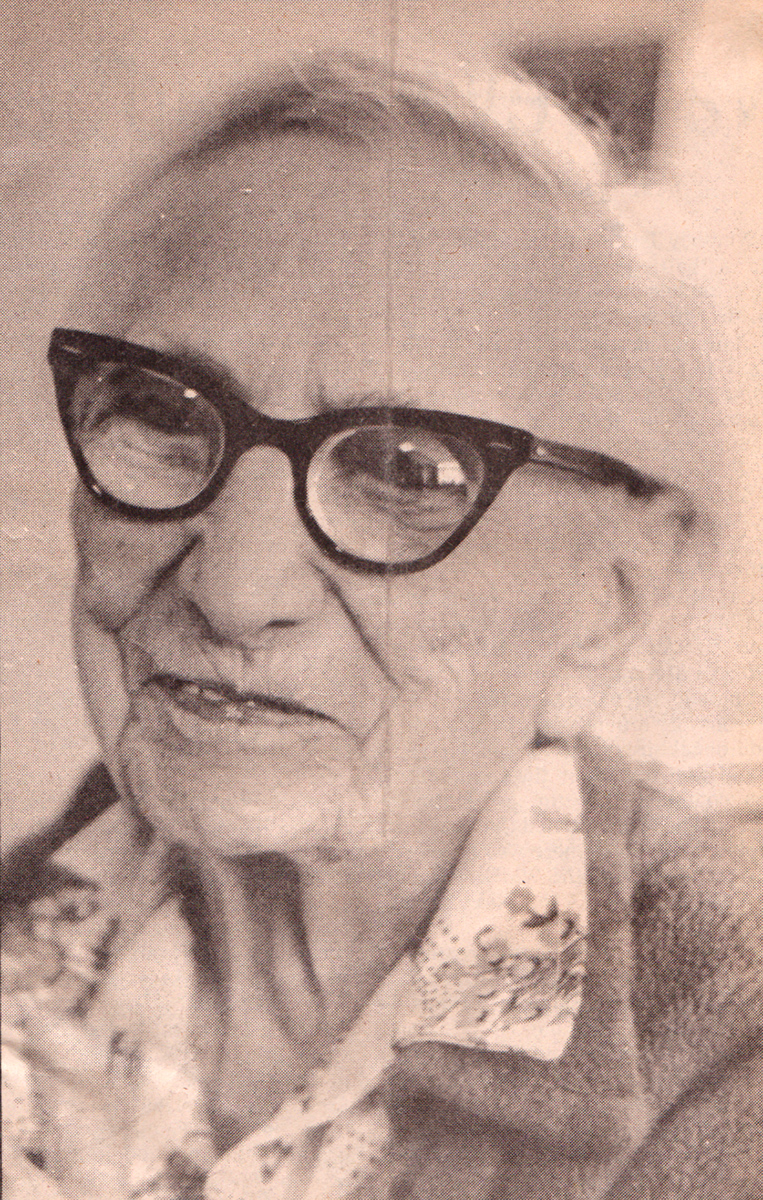 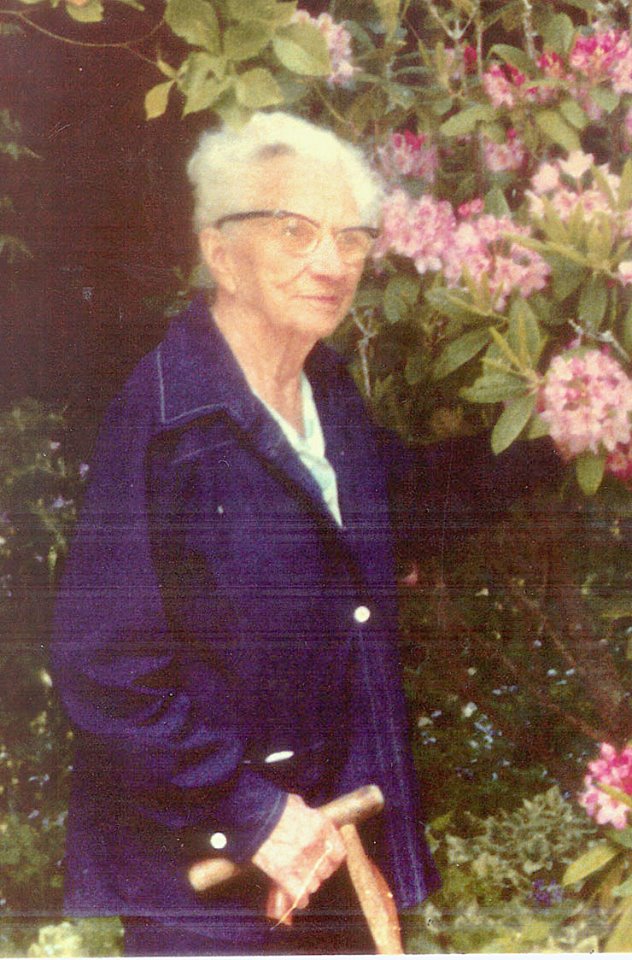 Looking for a homemade Christmas candy recipe? You may want to make this recipe (below) for caramels by one of South Whidbey Good Cheer’s founders, Hanna “Tommy” Double. The recipe is from the original Good Cheer cookbook produced in the 1960’s as a fundraiser.

Tommy was born in 1883 on a family farm in Pennsdale, Pennsylvania. The third of 10 children, she was taught compassion at an early age.

“My Dad had a beautiful farm called the ‘Home of the Friendless’,” she recounted in a 1983 article in the South Whidbey Record on the eve of her 100th birthday. The farm drew people who were down on their luck and they were made to feel welcome there.

It was her father, she said, who had the most influence on her life — a life dedicated to helping people. It is believed that Tommy was a social worker in New York City before moving to Whidbey Island in 1957 upon her retirement.

“My work all my life was for the guy that needed something,” Double was quoted in the article. It was that spirit that led her to help found South Whidbey Good Cheer with other local residents.

According to those who knew her, she was a tireless woman who managed the thrift store single-handedly for a few years while the nonprofit was being developed and volunteers enlisted to help.

“It was really more of a help closet then,” recalled the late Good Cheer volunteer Min Dexter in a 2007 article in Good Cheer’s newsletter. “There were a lot of house ﬁres in those days (1960s) and people would come to the thrift store for items that they needed to replace.”

Good Cheer was originally begun as a holiday charity distributing food baskets and children’s clothing and presents. It wasn’t until the early 1970s that it served as an in-house food bank.

“Before then, Tommy would hand out vouchers so that people could shop for their groceries at the Star Store,” Dexter said.
“Most people were responsible with what they bought, but a few bought candy and soda, so Tommy started to accompany them to make sure they bought basic nutritious food with the vouchers,” she said.

“Oh, yes,” conﬁrmed the late Jo Driftmier who had been a longtime volunteer, “there was no buying fancy stuff like raisin bread while Tommy was watching. It was basic whole wheat bread. No treats.”

“Tommy was a tiny woman, but what a tour-de-force she was,” recalled the late Judy Yeakel, who advised the food bank on commodities distribution in the 1970s. “She really kept Good Cheer going in those days,” Yeakel is quoted in the same article.

Margaret Scehovic remembered Tommy from when she and her family moved to Whidbey.

“We had just moved here in 1971 and then my husband was laid-off from Boeing. I remember walking in to Good Cheer and Tommy being very sweet and saying in effect, ‘Right now you need a little help and we’re glad to be here for you, but someday you’ll be back on your feet again and will be able to come back and help others.’”

“It was both a reassurance that the tough times wouldn’t last and a gentle way of recruiting a future volunteer,” she said with a chuckle.

“She was there all the time,” recalls Mark Myres, who moved near the Langley Thrift Store when he was 12. “I used to think she actually lived there,” he said.

“Tommy was a sweet, dear woman. She was always kind to me and I thought of her as a sort of grandmother who would help me ﬁnd socks or parts for my short-wave radio set.,” he said.

“It was amazing that she could see anything through her thick coke-bottle lens glasses, or that she got around as well as she did leaning on two canes,” he added.

Tommy kept running the Langley thrift store until her mid-90s when her health declined. Still, she wanted to keep working.

The sad task of asking her to retire fell to the late Robert Porter, then President of Good Cheer, and who until the Porter Building was opened ran his insurance ofﬁce in what is now the corner specialty item salesroom of the Langley Thrift Store.

“Tommy Double was quite a gal. She was a strong-willed woman, who when she wanted to do something, would do it.
“By the time I became Good Cheer Board President in the 70s, Tommy’s eyesight was so bad that she depended on someone else to drive her into Langley every day.

“Her health began to fail and she started to have fainting spells in the store. It broke my heart to have to insist that she retire, but I came up with the idea of naming her Good Cheer Board President Emeritus and made sure that someone brought her to the monthly Board meetings. She was treated like a Super Queen Bee and loved it,” he said.

Leona Potvin, Tommy’s right-hand volunteer, then took over as manager.

Tommy, who had been a resident at the Island Harbor Care Center in Freeland the last several years of her life, died in November 1984, just five months shy of her 101st birthday.

Cook the ingredients above to 250 degrees (use a candy thermometer).

Pour into a well-greased cake pan. Handle quickly — do not beat.

When cool, cut into one-inch squares (or rectangles). Wrap in waxed paper or coat with (melted) chocolate. 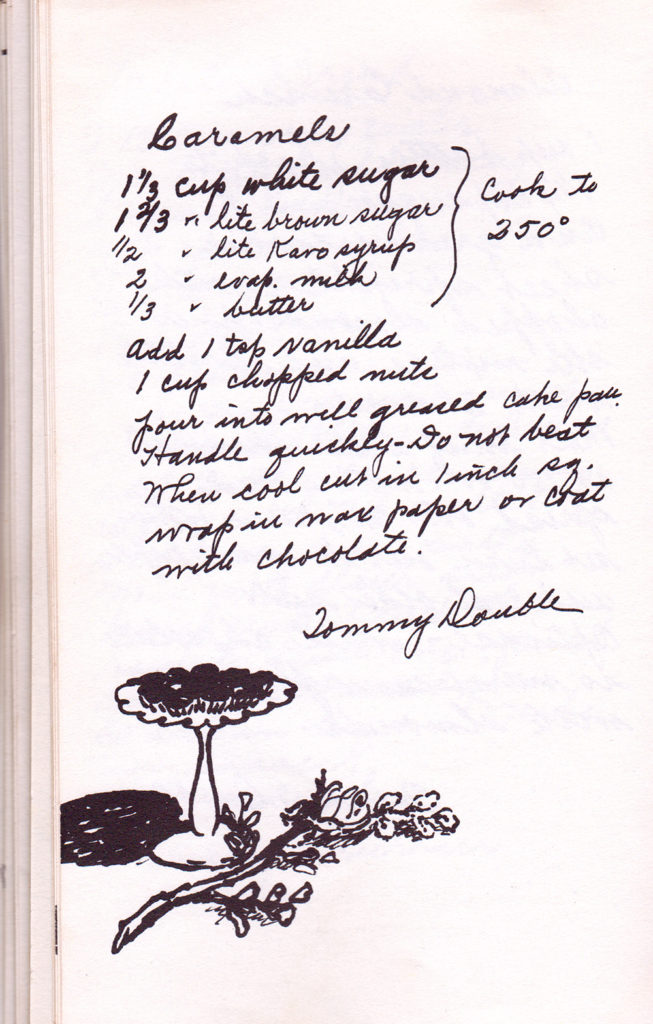