In 1904 Anton Myre Anderson and his wife Josephine (Olson) arrived in Langley. Anton, a Norwegian immigrant, and Josephine, who came to the U.S. as an indentured servant from Sweden, had originally settled in Texas.

Tragedy had struck the young couple as all three of their children died from typhoid-malaria and Josephine, then eight months pregnant, also became ill and miscarried their fourth child.

They heard that Washington State had an agreeable climate and moved to Langley by way of short stints in Ellensburg, Tacoma, Everett, and Camano Island.

Anton was a skilled blacksmith and carriage maker and he had no trouble opening a business on the main Street in Langley. He became known by the nickname “Blackie” because of his trade, and to differentiate him from “Gravedigger” Anderson — Anders Anderson — who also lived in Langley.

Anton’s blacksmith shop became one of the liveliest spots in Langley. Every so often word would spread over town, “the big horses are coming in from the woods and heading for Blackie’s place.” Folks from Bill Howard’s livery stable next to the blacksmith shop would come out to watch.

Youngsters would come run­ning from around and about. Frank Weber, the butcher, whose shop was next door to the blacksmith shop on the opposite side from the livery stable, would disappear into his storeroom and reappear with a batch of weiners. The youngsters would be hoping to munch on one while watching “Blackie” shoe the huge draft horses that were brought in from their duties in the logging operations. The butcher seldom disappointed them.

Farm horses, buggy horses and riding horses were a common sight on the streets and at the blacksmith shop and livery stable in Langley in the early 1900s but Mr. Barker and his four horse team of draft animals were something special. It was quite a sight to watch “Blackie” fit the huge hooves with iron shoes that would enable the horses to traverse miles of rough ter­rain pulling heavily loaded logging sleds.

There was a certain drama about Anderson’s blacksmith shop that intrigued young and old. “Blackie”, in his leather apron, with his dry humor and heavy Norwegian accent, had a flair for showmanship as he made his anvil ring and sparks fly with mighty blows on iron, red hot from the forge; or when he gentled down a ner­vous horse as he hoisted its foot onto his knee and nailed down a perfect fitting shoe. He also maintained a small social room at the rear of his shop overlooking Saratoga Passage where folks could wait in comfort and sip coffee while their horses were being shod, or their rigs repaired.

Although carriage making and blacksmithing were Anton’s profession his real love was boats. He was always building or tinkering with one in his spare time. His pride and joy was a sizable craft named “JJJ” which he used for fishing and for cruising with his family. His daughter Alma, in an interview in 1984, explained how the boat received its name.

The Andersons were a sociable family who loved music. Anton had purchased an organ for Alma and the house was usually filled with young people who would gather around the organ and sing the popular songs of the period.

At the top of the “Hit Parade” about the time Anton purchased his boat was the song, “Ja-Da Jing Jing Jing” which, it seemed to Anton was all he heard around his house for weeks. (See link to the song below.)

When he applied for a license for his boat and was asked its name he thought for a moment, then said, “Ve vill call it ‘Jada Jing Jing Jing’.” The clerk looked at him in puzzlement, “How do you spell it?” he asked. “Who knows,” Anton shrugged, “Yust call it JJJ”.

The following year, according to Alma’s recollections, her father had some problem about the license for the boat and he decided to take the matter directly to the then-governor, Roland H. Hartley. Anton had become acquainted with Hartley before he became governor and when they both lived in Everett.

Friends tried to dissuade the fiery Norwegian, pointing out that the governor of the state couldn’t be bothered with such a small matter but Anton was adamant. He went to Olympia and marched up to the governor’s office. The receptionist, upon learning that he had no appointment, said that the Governor wasn’t in.

“You’re a liar,” Alma quotes her father as saying in his heavily accented Norwegian. “I see him in there.”

The governor heard the disturbance, recog­nized Anton and not only attended to the matter of the license but also took Anton to dinner in the Capitol dining room where an im­pressive meal was served in semi-formal style.

After thanking the governor for his hospitality the spunky businessman from Langley promptly took the head of the state to task, say­ing, “No vunder our taxes are so high if this is the vay you spend our money!”

— adapted from Lorna Cherry’s book, “Langley, The Village by the Sea.”

Note: stop into the Museum this weekend to enter a drawing for your choice of a book in the museum’s bookstore.

Historical note: The Museum is the old 1902 bunkhouse built by Jacob Anthes for brush cutters which Anton and Josephine later bought and lived in. Their daughter, Alma (Anderson) Grist, donated it to the South Whidbey Historical Society in her will. 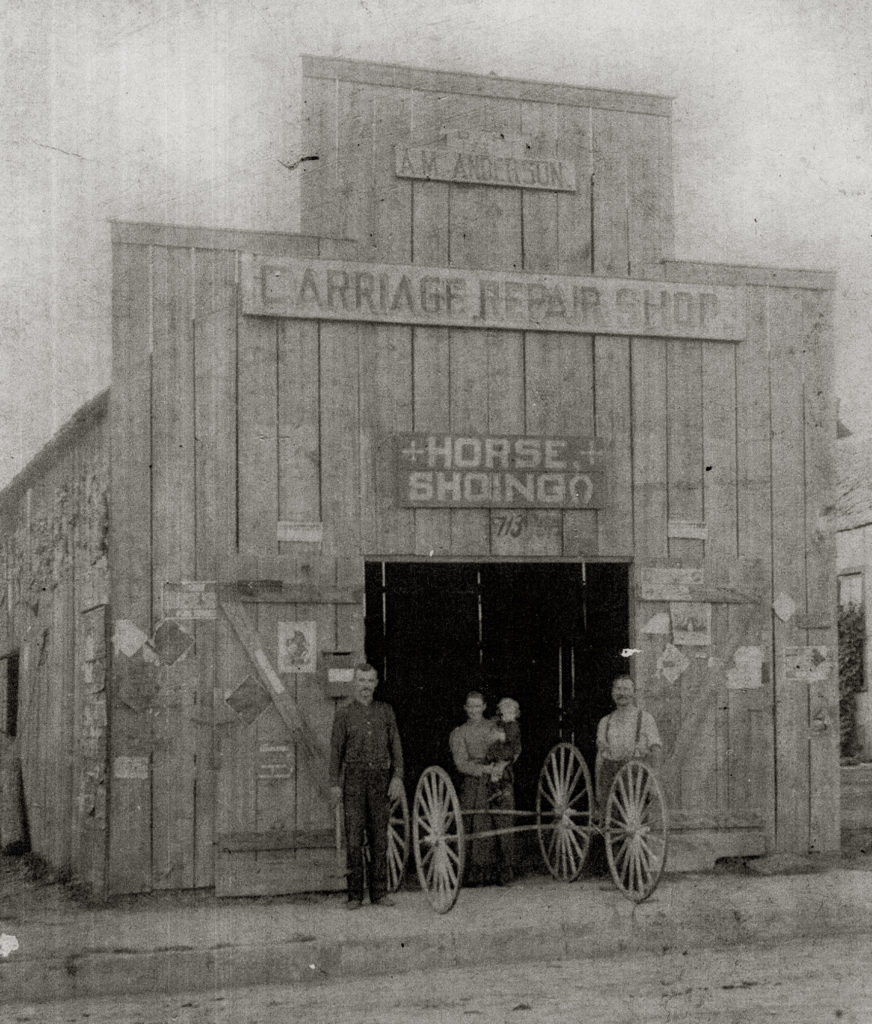