Arnold L. Bjorklund was born in a house near Deer Lake in 1918 and was later baptized at St. Peter’s Lutheran Church in Clinton. Although he only lived in Clinton, WA until the age of 4 or 5, South Whidbey can be proud to claim this WWII Medal of Honor recipient as a native son.

His parents, Karl (1886-1946) and Anna Sophia Nyland 1889-1976), had emigrated from Jeppo, Finland, and lived in Clinton where Karl worked as a carpenter and was believed to have helped build the Deer Lake School. 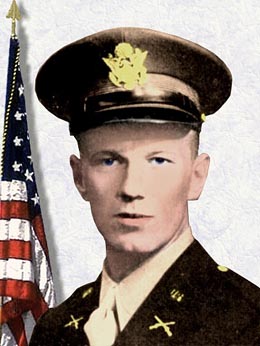 After their seventh and final child, Fred, was born in 1922, the family moved to the Crown Hill area on the north side of the Ballard neighborhood in Seattle and Arnold attended Ballard High School.

He joined the army on February 20, 1941. Following basic and advanced infantry training, he was selected for the four-month Officer Candidate School at Fort Benning, Georgia. In July 1942, he was commissioned a second lieutenant. Second Lieutenant Bjorklund received additional training and in 1943 went with the 36th Infantry to Europe, part of the 142nd Infantry Regiment.

In September 1943, First Lieutenant Bjorklund was serving as a platoon leader in the 142nd Regiment, 36th Infantry Division. On September 9, the division landed at Salerno as part of the Allied invasion of Italy. Establishing a beachhead was a tough struggle and four days into the invasion the battle was intense.

On September 13, 1943, outside of the small village of Altavilla, Italy, a company of the 142nd approached its objective, Hill 424.

Lieutenant Bjorklund led the attack on Hill 424 with his platoon on the hill’s right flank. The troops attacked the hill’s defenders with rifle, machine-gun fire, and grenades. However, the defenses on the terraces and in the vines were difficult to neutralize. The German positions overlooked and fired down on the American advance.

The attacking platoon found itself trapped, unable to advance and now within the sights of the hill defenses, unable to retreat. Lieutenant Bjorklund ordered his platoon to cover him with heavy gunfire as he crept toward the enemy machine gun that was laying down devastating fire. Lieutenant Bjorklund ran in a weaving pattern and somehow was not hit by enemy fire directed at him. Near the enemy machine gun he threw a grenade into the position and silenced it. The machine-gun crew of three was killed.

The platoon then resumed its advance on the hill, but was again halted by intense fire, this time coming from a second machine gun higher up the hill. Lieutenant Bjorklund employed the same tactics of advance, lopping a grenade into the position and killing the crew.

This opened the way for the troops to advance to the top of the hill. Here they paused, but it was a short pause as mortar fire soon hit them. This time Lieutenant Bjorklund, who had proven his skill in grenade attacks, took his last grenade and snuck down the reverse slope of the hill to within 10 yards of the mortar position. He threw the grenade and it landed next to the mortar, destroying it and its crew.

Lieutenant Bjorklund continued to lead his platoon and three days later was seriously wounded in battle, with 16 wounds to his feet and right arm. He was sent to a field hospital and then returned to the United States for recovery. He spent eight months recovering at McCaw General Hospital in Walla Walla.
During his recovery at the hospital he was selected to command a recreation camp in the northeast Oregon Blue Mountains at Tollgate. It was a former Civilian Conservation Corps camp converted into a fishing and recreation retreat. The mountains were considered ideal in the rehabilitation process.

While in the hospital he met the sister of a fellow patient and his closest friend, Army Air Forces Captain Leo L. Sawyer (1924-1986) of Walla Walla. Captain Sawyer received regular visits from his family that included his older sister, Darl E. Sawyer (1919-1997). Sawyer introduced his sister to Bjorklund and soon she was visiting both of them. When Bjorklund had a weekend, he stayed at the Sawyer home.

Arnold L. Bjorklund was medically discharged from the army on March 6, 1945. In April 1945, he and Darl Sawyer returned to McCaw General Hospital for their wedding.

The Bjorklunds moved to Seattle and built their home in the Crown Hill neighborhood next door to his parent’s home and his own prewar home.

Arnold went to work at Pacific Resin Company, which produced glues for plywood manufacture. He worked at the firm’s Harbor Island plant. When he advanced within the company to assistant plant manager, the Bjorklunds moved to Edmunds. They had two children, a son, Kent E. Bjorklund (b. 1950), and a daughter, Susan (b. 1953).

Arnold Bjorklund died at Vancouver in 1979 and is buried in the Willamette National Cemetery, Portland.