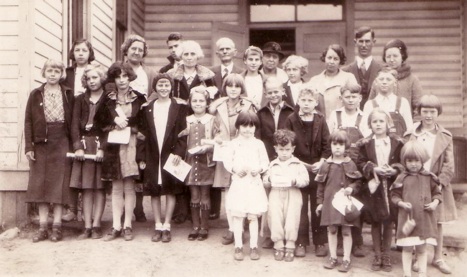 At the July 13, 2005 meeting of the South Whidbey Historical Society’s Board, Norma Grant Metcalf described her family’s history in the Bayview and Clinton areas of South Whidbey Island.  She reported that her family came to Bayview in 1918 or 1919 from Sequim on the ferry that then ran between Port Townsend and Fort Casey.

Her parents, Lloyd and Capitola Myrtle Grant, and her two older brothers settled in the area that is today the Useless Bay Golf and Country Club.  The house they lived in later burned, and its ashes scattered on the wind as far as the Bayview Cash Store and beyond.

Norma showed us photographs of cars similar to the Model T pictured above.  She remembers that it took a whole day to travel from Bayview to Coupeville because one could expect two to three flat tires along the way.

The Grants lived in a house on the bluff above Sunlight Beach.  It remains today among more upscale dwellings, though the porch has since been enclosed.  Her father had a dairy farm and grew hay.  Later he became a chicken farmer.  She remembers high windstorms on their west-facing bluff.  On at least one occasion, a tree limb shattered their front window and frightened her mother, who insisted they flee to the big barn with double doors in a lower, protected location.  Gathering the family in their truck, Lloyd drove the family inside the barn where they huddled for cover.  Myrtle grew restless after only a few minutes and insisted her husband drive on.  After some badgering, Lloyd succumbed, throwing the truck in reverse and backing out the barn doors.  Seconds later, the doors blew down into the space they’d just departed.

At that time, a 20-person phone line serviced Bayview residents.  As a result, they didn’t need a newspaper.  Everyone on the same party line would simply pick up to hear what was happening with his or her neighbors.  The Grant family ring was “…a long and a short.”

Sunday School classes were held in the Bayview School. Norma remembers riding the high school bus to that school, and being particularly enthralled by the cement basement of the building with its center-located furnace.  She remembers this because her parents had purchased a pair of red roller skates for her, and she skated joyfully on them around and around that furnace during lunch and recess.

In 1939 the family moved to Clinton, when Norma was in the 4th grade.  “We never had a very good reception in Clinton,” Norma said, “because Dad turned the school into a chicken place.” The Grant chicken farm was located uphill from today’s ferry dock, near the small shopping complex that comprises the Food Mart and Lincoln Computers.