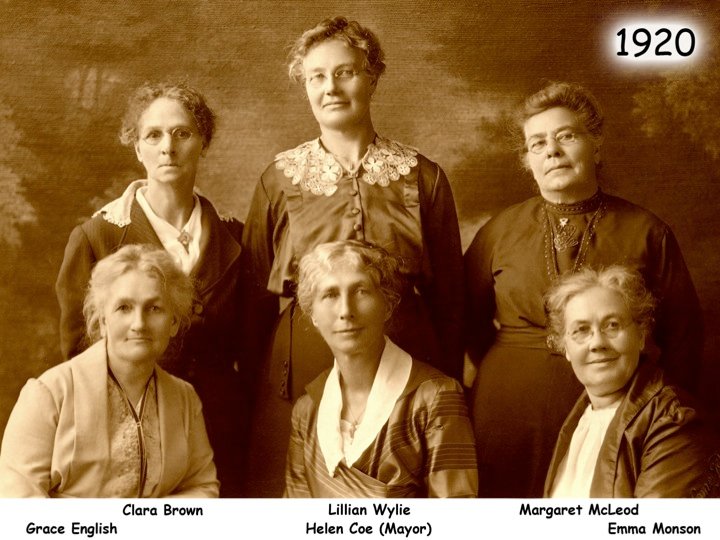 Langley on Whidby Island, which has the distinction of being the first municipality in this part of the world to be governed entirely by women, is quick to challenge the claims of Jackson, Wyoming announced recently in a press dispatch printed In the dally papers that it would become the first city to yield to the domination of women following the result of a recent city election.
Langley has had a woman mayor and full council composed of women for nearly a year and a more earnest or assiduous bunch of officials have never directed the affairs of that town.
During 1919 under man rule no meeting of the council was held for four months as no quorum could be obtained. So far the women have not missed a single meeting.
…New Dispensation Described…
Miss Helen B Coe Is mayor and Miss Emma Monson Is clerk. They are supported in their executive and administrative functions by a council of five women.
Commenting on the transformation if not regeneration that has come to pass in the island town an old resident of Langley who insists on remaining anonymous gave the following account to the local papers of the new dispensation:
“If you should pass the library building any Tuesday night you would see It ‘all lit up’ and seven earnest and good looking women discussing the needs of the town — how to discourage cows and horses running at large and prevent retired farmers from pasturing their stock on public streets and sidewalks or perhaps they are discussing the Sunday night movie ban which they are requested to suppress.
“When the women took charge they found the treasury empty and many bills unpaid the old board having expropriated all the money between the election and the time the women took office. But as taxes are being paid the work progresses without noise or friction.
…Dire Predictions Fail…
“Four months under their management has developed nothing hut efficiency and common sense. Some of the mossbacks and lame ducks made dire predictions — how the town would go to the dogs or some other place us soon as the women took charge. Some even went so far as to threaten to move away but so far nothing serious has happened and our Jail Is still waiting for its first guest.
“Our worst lawbreakers are becoming pretty decent citizens and are obeying all legal restrictions placed on them by the council.
“During 1919 the men council suspended the collection of dog licenses and dray and jitney licenses as most of the councilmen owned one or more dogs and some were liable for traffic licenses. But this year there are no favors shown and they will come through without a kick.
“The reforms inaugurated so far are:
The stopping of punch boards and gambling.
Closed the pool hall and card tables on Sunday.
No Sunday dances.
No minors in card rooms and pool halls at any time
And a general toning up of the appearance of the town.
“Some think they gone too far In their reform— that they pry too much Into personal affairs that do not concern the public and affairs foreign to the town.
“If there was a dead cat or horse within a mile of town the marshal was ordered to bury same. The outcome was that the first marshal resigned in disgust if not in despair.
“However handicapped by lack of experience and help from the men, they compare favorably In business management with any council that Langley ever had and the people of Langley are justly proud of the mayor and council.”