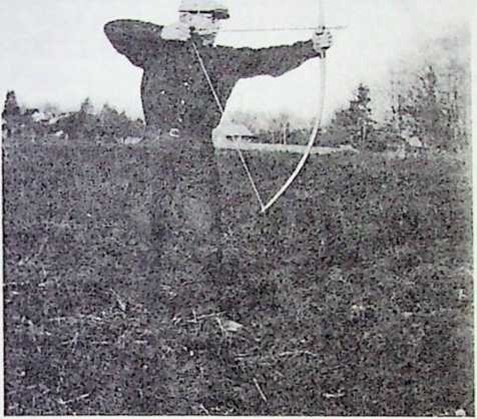 “Pop” Harmon and one of the bows and arrows which were among the many things he made.

Perhaps William Harmon wasn’t actually a genius in the eyes of the world and perhaps somewhere in the world there was a better cook and homemaker than Nancy McStotts Harmon but there are old-timers around Langley who would argue the point. The Harmon home on Edgecliff Drive was a landmark from 1900 when, as newlyweds, William and Nancy built it until 1945 when William died.

William Harmon, who was born in 1871 in West Virginia, arrived in Langley at age 20 just as the infant village was being platted. He work-ed for Jacob Anthes cutting cordwood for steam ships for quite some time, then went to the mainland where he served as a logger in the area around Mt. Vernon. In the meantime his father had died and his mother, Sarah Jane Harmon had married a widower named McStotts and they had moved to Lowell. With them was McStotts’ daughter, Nancy. When Will Harmon visited his mother and his step-father romance blossomed between him and his stepsister Nancy.

They were married in 1900 and moved to Langley, purchasing acreage on Edgecliff Drive which was at that time largely in woodland. While William was constructing their house the couple lived in the hotel on the beach at Brown’s Point (now Sandy Point) which was owned by Joseph and Mary Brown as was much of the other property in the area.

Five children were bom to William and Nan-cy Harmon; Avis, born in February, 1903, Nell, April, 1904; James, November, 1905, Nora, on Christmas eve, 1907, and Dorothy, May, 1912. The three oldest children attended Brown’s Point School. (Their report cards are shown in the schools chapter of this volume.)

In 1921, Nell, along with Ester Anderson (Moe) and Irene Dahlman (Lieseke) were the total graduating class from Langley High School. Nell continued her schooling at Bellingham Normal School (now Western Washington University), then returned home to teach in the one room school at Saratoga.

A young man named Ernest McPhail who, along with his two brothers, had constructed the first cabins at Sandy Point, camped on the school doorstep with object matrimony during most of the year while Nell was teaching. He won the young teacher’s heart and they were married in 1923. Their son, Roderick was bom on March 25, 1928 at Sandy Point where they had established their home. He has written an account of his experiences while growing up there especially for this volume. 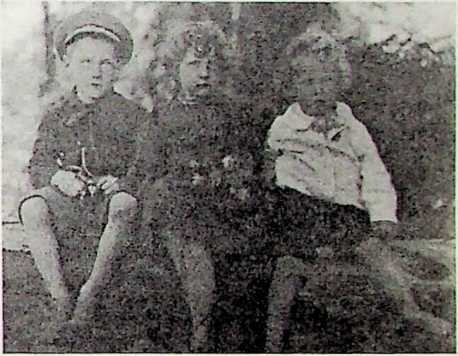 “I was four years old in 1932 and I remember well walking about a half mile up the hill to my grandfather Harmon’s home to spend the day visiting and observing the fascinating things he could do. He could build bows and arrows, forge and make fine knives and razors, as well as hammers. He grew and cured his own tobacco, constructed woven wood baskets, whittled brooms and innumerable other articles which were absolute works of art as well as functional. He also was the inventor of the “Harmon Wedge”, the principle of which is still in use today. (Editor’s note: A Harmon Wedge is on display in the South Whidbey Historical Society museum).

“Growing up at Sandy Point was the best good fortune I could have had even though some of those early years were during the Depression. One of the favorite sports of a group of us boys. . . Stuart and Newell Smith, Bob Adair, Richard and Pat Clyde and myself.. . was to race each other swimming from Sandy Point to Langley. In Langley we would fortify ourselves with soda pop, doughnuts and “rubber necks”, (maple bars with frosting and nuts on top), which were four for a nickle when a day old. Then we would run back to Sandy Point for the second leg of the race.

“Once when I was trying to swim to Camano Head from Sandy Point and was about half a mile off-shore blackfish (killer whales) were going through on the Sandy Point side. I was scared to death at first as I couldn’t have been more than 10 yards away from them. As they kept peaceably on their way I began to realize that these amazing creatures were completely safe and kindly toward humans.

“My uncle, George McPhail, had come from Everett to Sandy Point in the spring of 1914 with my Uncle Earl who was 14 years old. They had come to build the first cabins at Sandy Point and they set up a tent in which to live while construction was going on. About a month later my father, Ernie McPhail, who was 12 years old at the time, came to do the cooking while the summer cabins were being built. These cabins were the first at Sandy Point and the first one was for a family by the name of Woodruff. 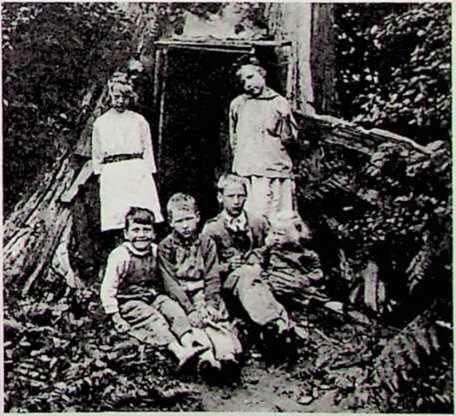 A 1915 photo showing the size of a tree on the Har-mon property. Standing are Nora and Nell Harmon. Seated are Phil Garner, Jim, Auis and Dorothy Harmon.

“My Uncle Earl recalls those years as being the best of his life. There was swimming, beach parties, clam and crab feeds and salmon bakes on the beach and the fun was shared by the “little Harmon girls”, (Nell and Nora). Earl also remembers the wonderful baked bread made by Grandma Harmon which they purchased along with fresh strawberries grown by Grandfather (Pop) Harmon.

“The McPhails left after completing the first cabins but they returned sometime in 1921 to do repairs on the cabins. My father, Ernie, remained to court Nellie Harmon and they were married in 1923.

“Growing up at Sandy Point were certainly the finest years of my life. There were the same beach activities that my Uncle Earl had recalled as well as the special beach parties when the Tulalip Indians came to Sandy Point to celebrate. They came in original dress in their great war canoes. Often the parties lasted all night.”

The boy who swam with blackfish off Sandy Point is now a well known architect and lives in Everett with his wife, Donna. His mother, Nell Harmon McPhail, sold her home at Sandy Point in 1960 and purchased her present home at the corner of Fourth Street and Cascade Avenue in Langley. As this is written she is recovering from an illness at Harbor Care Center in Freeland. Ernest McPhail died in Wenatchee in the late 1970s but his brother, Earl who is now 86 and lives in Wenatchee, supplied part of the information in this story. 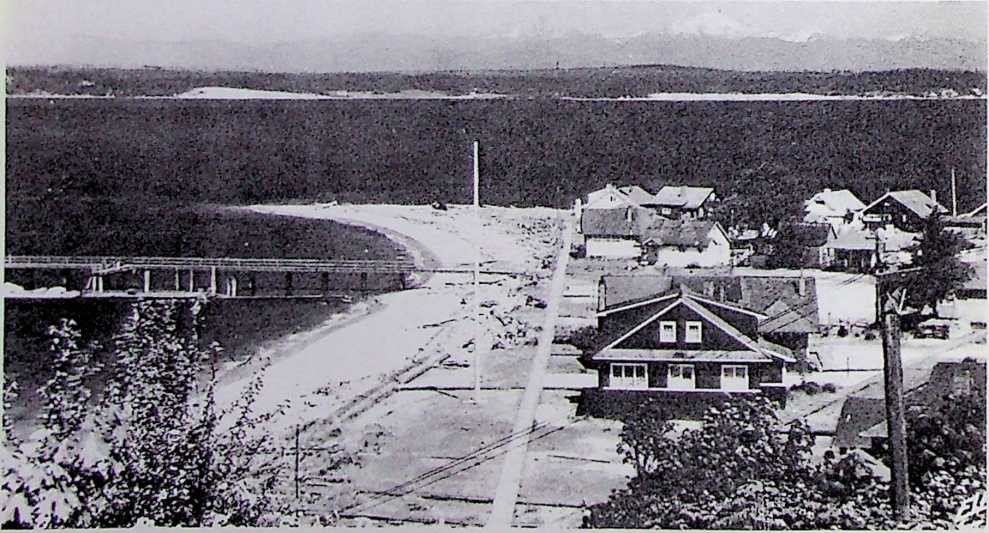 Nora Harmon Wickstrom Eves with her husband, Nels Wickstrom on Edgecliff Drive, Langley in a new house which they built in 1971 on the same property where Nora’s parents lived and where Nora and her brothers and sisters were born. After she graduated from Langley High School in 1926 Nora went to work for a Swedish bakery in Seattle. While there she met a young man, Nels Wickstrom, who had come from Sweden when he was 19. They were married on December 23, 1940 and shortly thereafter came to Langley and made their home with Nora’s father, “Pop” Harmon who was by then a widower, his wife having died in 1922. Pop Harmon died in 1945. Both he and his wife are buried in the Langley cemetery. Nora and Nels lived for a time in Alaska but have made their home on the old homestead property on Edgecliff Drive since 1971. Then- daughter, Lael works for the Alaska Airlines.

Nora Wickstrom has supplied an interesting bit of information regarding the naming of Edgecliff Drive. She recalls that when she was a child a delightful widow whom they called Aunt Jane Potts was a neighbor. She had lived there since before 1900 and it was she who named the area, which was then mostly in woods, as “Edgecliff”. The children loved to visit her home which was always filled with the tempting odors of fresh baked bread and cookies which she shared with them. Jane Potts was the aunt of University of Washington zoologist, Trevor Kincaid.

The Harmon boys, Avis and Jim, are both dead, Jim having drowned in an accident in the San Juans in 1926. Avis lived in Langley until his death.

Dorothy Harmon married Ralph Noble and their daughters, Nancy and Sue, graduated from Langley High School. Dorothy now lives near Aurora Village. Sue is a Seattle attorney and Nancy and her husband live in Washington, D.C. where he is connected with the diplomatic service.