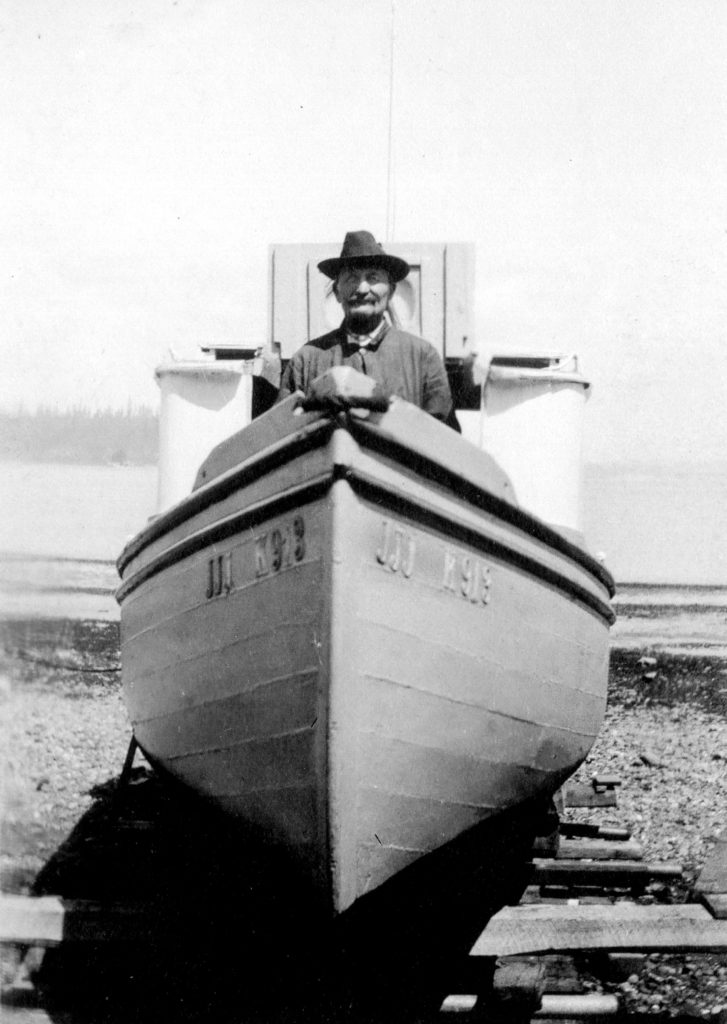 Anton Anderson and his famous boat “The Jada Jing Jing”.

It was August, 1904, and it was hot the day that Anton Myre Anderson debarked from the steamer Fairhaven onto the Langley dock with his wife, Josephine, his nine-year-old son, Otto, and his two-year-old daughter, Alma. They had come from Everett with all their worldly goods and with high hopes for a good new life in the good new village of Langley. Life hadn’t been easy for Anton and his family up to that point.

Anton was a skilled blacksmith and carriage maker and was plying his trade in Texas when he met and married Josephine Johanna Olson who was bom in Sweden. She had been brought to Texas by her father when she was 16 years old and had been an indentured servant to a wealthy family there.

They had heard that the state of Washington was blessed with a salubrious climate so Anton moved what was left of his family, Josephine and son Otto, first to Ellensburg, then to Tacoma, then to Everett where their daughter, Alma, was born. Shortly after her birth the family moved to Usually, Camano Island. While on a boat trip to Langley, Anton met Jacob Anthes who persuaded him that there was a real opportunity for a skilled blacksmith and carriage maker in the village which Anthes and his associates had started.

The Anderson’s first view of Langley when they debarked from the Fairhaven on the 999 foot dock was not prepossessing. There appeared to be little more than a long, sandy beach covered with brush and driftwood, however they were not without a place to live. Anton had rented a building from the Monson family on Third and Anthes streets three weeks previously, had set up his blacksmith shop equipment in the building and had arranged living quarters in the rear. The little family moved in and set up housekeeping.

They had barely become settled when, the following year, “Brother Mac” purchased the land as part of the property upon which the new Methodist church was to be built.

Their next move was into the cookhouse for loggers which Anthes had built in 1890 and which had been occupied by the Roderick McLeod family before they built their hotel. This time Anton was taking no chances of having to move again. He borrowed $50 and purchased the place.

It was still in the possession of his daughter, Alma, in 1986 and she referred to it as “Old House”.  Anton also purchased a building on First Street at the top of the bluff and established his shop there until 1925 when he retired. Anton died in 1933 and the building was sold to Richard Luhn who used it for a real estate office for many years. It is now (1986) owned by Attorney Tim Martin who has his law office there.

Anton’s blacksmith shop became one of the liveliest spots in Langley and he became known as “Blackie” Anderson. Every so often word would spread over town, “the big horses are coming in from the woods and heading for Blackie’s place.”

Folks from Bill Howard’s livery stable next to the blacksmith shop would come out to watch. Youngsters would come running from around and about. Frank Weber, the butcher, whose shop was next door to the blacksmith shop on the opposite side from the livery stable, would disappear into his storeroom and reappear with a batch of wieners. The youngsters would be hoping for a “weenie” to munch while watching “Blackie” shoe the huge draft horses that were brought in from their duties in the logging operations. The butcher seldom disappointed them.

Farm horses, buggy horses and riding horses were a common sight on the streets and at the blacksmith shop and livery stable in Langley in the early 1900s but Mr. Barker and his four-horse team of draft animals were something special. It was quite a sight to watch “Blackie” fit the huge hooves with iron shoes that would enable the horses to traverse miles of rough terrain pulling heavily loaded logging sleds.

There was a certain drama about Anderson’s blacksmith shop that intrigued young and old. “Blackie”, in his leather apron, with his dry humor and heavy Norwegian accent, had a flair for showmanship as he made his anvil ring and sparks fly with mighty blows on iron, red hot from the forge; or when he gentled down a nervous horse as he hoisted its foot onto his knee and nailed down a perfect fitting shoe. He also maintained a small social room at the rear of his shop overlooking Saratoga Passage where folks could wait in comfort and sip coffee while their horses were being shod, or their rigs repaired.

Although carriage making and blacksmithing were Anton’s profession his real love was boats. He was always building or tinkering with one in his spare time. His pride and joy was a sizeable craft named “JJJ” which he used for fishing and for cruising with his family. His daughter Alma, in an interview in 1984, explained how the boat received its name.

The Andersons were a sociable family who loved music. Anton had purchased an organ for Alma and the house was usually filled with young people who would gather around the organ and sing the popular songs of the period. At the top of the “Hit Parade” about the time Anton purchased his boat was the song, “Jada Jing Jing Jing” which, it seemed to Anton was all he heard around his house for weeks. When he applied for a license for his boat and was asked its name he thought for a moment, then said, “we will call it “Jada Jing Jing Jing.” The clerk looked at him in puzzlement, “How do you spell it?” he asked. “Who knows,” Anton shrugged, “just call it JJJ”.

The following year, according to Alma’s recollections, her father had some problem about the license for the boat and he decided to take the matter directly to the then-governor, Roland H. Hartley. Anton had become acquainted with Hartley before he became governor and when they both lived in Everett. Friends tried to dissuade the fiery Norwegian pointing out that the governor of the state couldn’t be bothered with such a small matter but Anton was adamant. He went to Olympia and marched up to the governor’s office. The receptionist, upon learning that he had no appointment, said that the Governor wasn’t in.

“You’re a liar,” Alma quotes her father as saying in his heavily accented Norwegian. “I see him in there.”

The governor heard the disturbance, recognized Anton and not only attended to the matter of the license but also took Anton to dinner in the Capitol dining room where an impressive meal was served in semi-formal style.

After thanking the governor for his hospitality the spunky business man from Langley promptly took the head of the state to task, saying, “No wonder our taxes are so high if this is the way you spend our money.”

Around Langley Anton had the reputation of being an outstanding fisherman and Alma often went with her father on his fishing excursions. She recalls that they used to row from Langley up to Baby Island and gather clam shells of which there was an abundance left over from the days when the island was inhabited by Indians. Her father would load the clam shells into the boat, then row over to Edmonds where he would sell the shells to chicken farmers. Once he caught a huge Skate which he sold to some Japanese in Everett for a handsome price. 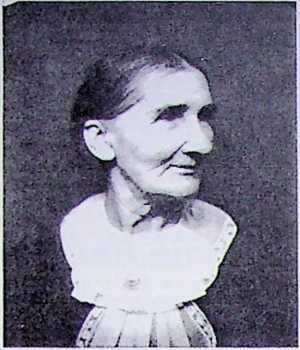 Alma recalls that she practically grew up on the beach from her infancy through her teen years. “I went in and out with the tide”, she quips. She was constantly falling off the dock while fishing or getting into other dangerous situations from which the men working around the dock would extract her, often with a pike pole wound around her dress to keep her from drowning.

She handled a rowboat with dexterity and one incident when she was about 10 years old remains vividly in her memory. Her parents had taken her and a friend over to a beach on Camano where they often camped and dug clams or picked blackberries. Her father found it necessary to return to Langley temporarily, going in his big boat, and leaving a small rowboat beached. Alma had 25$ for spending money so she decided to row her friend back to Langley where there was an ice cream and candy store on the dock.

Unfortunately her father was on the dock when she arrived and, after sternly scolding her, he turned her around and made her paddle all the way back to Camano. He followed her in his boat. She was one tired 10 year old when she finally beached the rowboat at the Camano camp.

When she wasn’t fishing or rowing or playing the organ Alma would gather her girl friends together and indulge in hair-styling. However the “modus operandi” in those days differed considerably from present procedures. Curling irons were the order of the day. They were wooden-handled metal cylinders which were inserted into the chimney of a lighted oil lamp and left until they were hot enough to sizzle when touched by a moistened finger. Strands of hair were then rolled around the hot iron until they curled. Woe betide the lass who used too hot an iron! Singed, frizzled locks were the result, not to mention the noxious odor of burning hair which would permeate the atmosphere.

During the influenza epidemic of 1918 both Alma and her mother, along with most of the rest of the community, were seriously ill, running high fevers and having lungs congested. Mrs. Lillian Wylie, who was later a member of Langley’s all-woman Council, was a nurse. She came to the Anderson home with a feather dipped in kerosene and required the influenza sufferers to open their mouths. She then inserted the feather into their throats, tickling them until they coughed vigorously, loosened the congestion and expelled it, thus permitting their lungs to function again. Alma firmly believes that Mrs. Wylie saved many lives during the epidemic.

After attending elementary school in Langley Alma went to Everett to obtain a high school education, working for her room and board. Her mother became ill with breast cancer and Alma interrupted her high school education to come home and nurse her. However, she graduated from high school in 1921 and attended Washington State College for a time. Unable to afford the costs she transferred to Bellingham Normal school, (now Western Washington University) and obtained her teaching certificate. After a six month stint of teaching in the Okanogan area she returned to Langley and taught school at Mutiny Bay.

In 1927 she married William J. Porter, son of Mutiny Bay pioneer, Nathanial Porter. The marriage lasted until 1944, the year that her mother died.

After her divorce Alma renewed her teaching certificate and taught school in North Kitsap where she met and, in 1946, married Fred Grist, a retired navy man. They lived for six years on a farm they had bought in Tennessee but returned to the Northwest when Alma’s brother, Otto became seriously ill and required her assistance prior to his death.

For a time Fred and Alma lived in Poulsbo where Alma taught school and Fred worked at the torpedo base. They returned to Alma’s childhood home in Langley in 1965 living in “Old House’’ while they built an attractive brick home a half block away from “Old House’’ on Second Street. Fred died in 1986 and is buried in Langley cemetery.