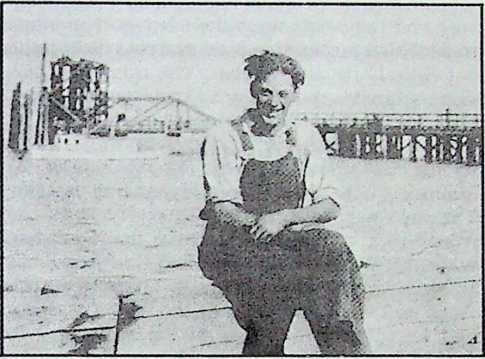 The dock at Clinton as it appeared in 1935 after remodeling by Black Ball. Pictured is Ivar Swan, local carpenter, who worked on this project.

Anna Nyman might have had serious second thoughts about leaving her Finland home in 1900 and journeying across an ocean and half a continent to join her brother in Nucla, Colorado, if she 52 had even remotely envisioned that she was walking into a murder. Her brother had written glowing accounts about the fortune he was about to make working in the gold fields. He urged her to join him. After her arrival in Nucla, she scarcely had time to adjust to the rough and lawless life of the mining town before her brother’s claim was jumped and he was murdered.

She fled to Eureka, California, where she met a young Finlander, Evert Swan, who arrived in the United States in 1899 at the age of 19. His interests ran toward carpentry and romance rather than mining and murder. They were soon married. Shortly thereafter, the newly-weds moved to Seattle where Evert (or “Ed,” as he was generally known) obtained work as a building supervisor. Things went well for the young couple. They built a large home on East Pine still in use in 1985. Their home soon became a popular meeting place and then a boarding house for the Finnish and Swedish folks who had come from the same general area as Ed. Among their friends was Nils “Peg-Leg” Anderson who had married a girl from Ed’s home town. Nils had logging camps in operation on Camano Island, Glendale, and Clinton. He owned a Donation Land Claim (DLC) of 120 acres taken out in 1869 in Clinton.

In 1908 Ed fell from a roof while on a construction job. This left him with a permanent back injury which put an end to his construction career, so he started filing saws for Peg Leg. By this time, Ed and Anna had become the parents of three- year-old Ivar and one-year-old Ellen. With a family to support, it seemed better for Ed to move closer to the base of operations of his new saw-filing business. He shopped in Clinton for property, and bought a quarter section from Peter Peterson in fifty-fifty partnership with a Finnish friend, William Anderson. There was one house on the acreage to be shared by both families.

In 1910, Anna and their children arrived by steamer at the Clinton dock with all their worldly goods. Jacob Simmons met them with his team and wagon and took them to their new home. The house had two large bedrooms, a large sitting room, a parlor on the first floor, and two kitchens. Ed had built an extra kitchen, pantry, and utility room for his family’s use. On the second floor was a large bedroom and an open bunk room. The house, built of shakes, had originally been used as sleeping quarters for loggers. It was drafty and cold. The large barn on the premises was somewhat of a landmark in the area. It wasn’t far from Deer Lake School. Sometimes the children who rode horse-back to school would stable their mounts at the Swan barn. One of these was Dorlesca Hinman, daughter of the Henry Hinmans who founded Clinton.

Ed and Anna added more children to their family as time passed. Besides Ivar, Ellen, and Inez, all born in Seattle, Edwin was born in Clinton in 1914. Elsie was born three years later in 1917. Ed became known throughout the area as an excellent builder. Besides several houses, he also built the Clinton post office on the beach. With the help of Carl Bjorklund and volunteer labor, he built the new Deer Lake school-house and play shed in 1915. As soon as his son Ivar graduated from eighth grade at Deer Lake School, Ivar gave his father his full time working as a carpenter. Eventually Ed’s old back injury forced him to use crutches and brought a halt to his carpenter work, but he repaired pump organs.
The Swans were active participants in community affairs. Ed had considerable talent in dramatics and served as auctioneer for basket socials and bazaars. Ivar recalls a Hallowe’en party on the shores of Deer Lake. The night was dark and frosty; the folks had built a huge bonfire and were roasting marshmallows. Suddenly a mysterious row-boat appeared on the lake, gliding silently to the shore. Then, from the boat, two pilgrim fathers debarked and approached the party. These seem ingly reincarnated apparitions turned out to be Ed Swan and a Mr. Blanes.

Ed Swan died in 1932 at the age of 52. Anna passed away in 1953 at the age of 76. Most of their children remained in the Clinton area. Inez married Horace Flynn; they purchased the Anderson half of the original farm in 1935 from William Wagner. Edwin continues to live in the old home place, although a new house has replaced the original dwelling.
Ellen married Douglas Satcher and they moved to Seattle. They have one daughter, Mary Ellen Latham, also of Seattle.
The youngest member of the Swan family, Elsie, married Al Olkonen. Their home is in Clinton on a farm adjoining the original Swan property. They purchased the property from the August Erikson estate. The first house they lived in was a cabin, the honeymoon home of John Jensen. At the time the Jensens lived in the cabin, owner August Erickson hired Ed Swan to remodel it. He was paid $ 1 per week. The house was still standing in 1985 with the Olkonen’s son Gary as tenant. Selma Ann Delgado, the Olkonen’s daughter, resides in Moses Lake; she has four children. Their second son Evert lives on half of the original Swan property. Al and Elsie live in the house originally built by the Erickson’s daughter, Olga Yeo, on the former Erikson estate.

Elsie Swan Olkonen has been prominent in community affairs beginning in her Deer Lake school days when she participated in school dramatic events. She was valedictorian of her high school graduating class. Her community activities have included work with the Democratic party, the Clinton Progressive Club, and Saint Peter’s Lutheran Church. She was a member of the board of the South Whidbey Historical Society in 1985.