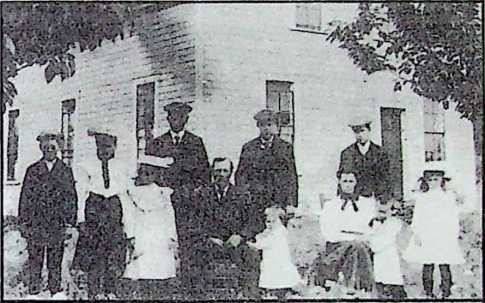 A photo of the Jacob Simmons family taken in front of their home. Front row: Christine, Jacob, Jack, Halverina, Aleda, and Bessie. Back row: Ted, Helma, Alfred, Carl, and Martin. Not shown: Severine who was married and gone from home when this picture was taken.

Jacob Simmons decided to follow his brother- in-law Ole Peterson to South Whidbey Island in 1889 and settle on a farm a couple of miles from the Clinton business district, up Deer Lake Road. His only purpose was to make enough money log¬ging giant cedar trees to support his wife and ten children. Becoming a community mover and shak¬er was the farthest thing from his mind.

Somehow, one activity seemed to lead to an¬other. Before Jake Simmons’ life was over in 1936, he had helped incorporate a store which was to form Clinton’s main business core for many years. He was a prime mover in establishing a church and the adjacent cemetery which would still be go¬ing strong three-quarters of a century later. He took a leading part in promoting a social club which would flourish and be patronized by his great-grandchildren in 1985.

Jake had gone from hauling freight with an ox team to hauling passengers in an automobile taxi¬type service called a “jitney.” He helped the coun¬ty road building crew. He also put the fear of retri¬bution into the hearts of boot-leggers in Prohibi¬tion days when he served as a deputy county sher¬iff. He once escorted a dangerous prisoner from Island County all the way back east to New York City.

Finally, he distinguished himself by establish¬ing a miniature family dynasty which, in 1985, consisted of over 100 members—34 of whom are known to be living on or near his original holdings on South Whidbey Island.

Jacob’s story begins with his birth in Illinois in 1863. It accelerates in 1882 when he married Hal- verina Skorpin, the young lady from Norway with the same birth-year as his. They set up housekeep-ing on a farm in Iowa. Jake’s daughter Severine was born in 1884; his son Alfred arrived in 1887. Simmons migrated west to Utsalady on Camano Island in 1889 where his son Carl was born. In 1890, Jake settled for keeps on a farm outside of Clinton.

Not the least of the things for which Jacob and his wife are remembered is their deep involve¬ment with their religion; in one instance, they un¬wittingly almost disgraced their pastor.

Prior to the incorporation of Saint Peter’s Lutheran church, religious services of sorts—as well as prayer meetings and the Ladies’ Aid—were being held in various homes, mostly at the Simm¬ons home. For some time after the church was off¬icially founded, there was no minister in resi¬dence. Services would be conducted by a bor¬rowed pastor who came over by boat from Ever¬ett. He usually stayed at the Simmons home. A special room, known as the pastor’s room, was kept for him so that no matter what time of day or night he arrived, he could go right to his room without disturbing the family.

This worked out well for everybody since the family usually had a fair idea of when the pastor would be coming. On one special night, however, he arrived unexpectedly in the wee small hours. Not wishing to disturb the family by lighting an oil lamp, he crept quietly to his room and to bed only to discover that he had two young girls as his bed companions. Helma Simmons had asked a girl friend to stay overnight with her. Since they weren’t expecting the pastor, the girls had gone to sleep in his room. A chagrined pastor and two startled girls resulted from that encounter.
Halverina Simmons died in 1925; Jacob Simm¬ons died eleven years later. Both are buried in the Clinton cemetery which they helped to establish. All but four of the ten children of Halverina and Jacob Simmons established their homes on South Whidbey Island. Alfred moved to Seattle; Christine to New York; Alida to Tacoma; and Jack to Connecticut.
Severina married John Jensen, a local fisher¬man. They made their home near Clinton where their children Esther and Sanford were born. Bessie Simmons married Edward Thorsen; her brother Carl Simmons married Edward’s sister, Estelle Thorsen.

During his youth, Carl helped his father and brothers in their logging business. Until he was old enough to drive, he was given the job of putting axle grease on the skid logs so that felled trees would slide more easily. He remembers that while they were logging in the Cultus Bay area, the Glen¬dale train would come about as far as the present Log Cabin Road, and then haul the logs to the beach. As a soldier in World War One. Carl had just reached France when the Armistice was sign¬ed so he did no actual fighting. He spent most of his adult life in the trucking business although he worked for a time as a watchman on the ferries. Carl is remembered by many in the community as an exceptionally kind and generous man.

Martin Simmons, as a youngster, often was the partner in mischief with his cousin Nellie Peterson, but he managed a few escapades on his own as an adult which his family remembers with amusement. One of these was the time the John Skarberg house caught fire. At that time, there was no fire department, so everybody was rushing in and out of the house trying to save the furniture and other valuables. Just as the roof was about to cave in, somebody opened the bathroom door and discovered Martin sitting calmly on the floor with wrench and screw-driver removing the nuts and bolts holding the toilet in place. He had removed all of them and insisted that the fixture be hauled outdoors to safety.

Then there was the time when Martin was a dashing young bachelor working on the passenger boat Clatawa which ran between Clinton, Langley, and Everett, He set the hearts of a group of Langley teen-age girls so much a-flutter that they would meet his boat each time it came to Langley and try to strike up a conversation. It is reported that he was very courteous but remained aloof. Eventually a young teacher at Deer Lake school, Mary Henne, captured his heart. They were mar¬ried and became the parents of seven children— Mary Louise, Roy, Stanley, Martin Junior, Margaret, Carl, and Barbara. 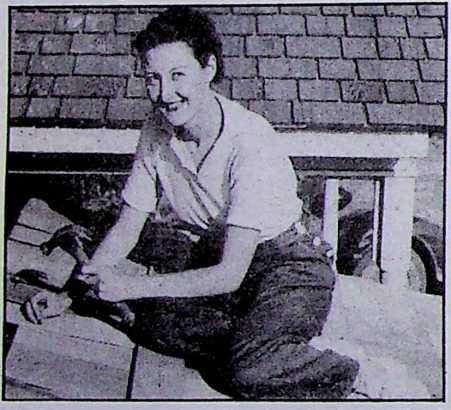 Marie Bevers was an early columnist for the South
Whidbey Record and the author of several popular
cookbooks. She was also a member of the Island
County planning commission and a board member of
the South Whidbey Historical Society at the time of
her death in 1983.

Like his brother Carl, Martin joined the Army during World War One and was in New York pre¬paring to embark for France when peace was declared. Later, in World War Two, his son Stanley was killed in action. Martin became a truck driver
and heavy machine operator for the county. For ten years prior to his retirement, he was road superintendent for Island County. Helma Simmons was an organist at Saint Peter’s Church for many years. She married Gust Erikson, a member of another prominent pioneer family. Gust served the area as a mail carrier for several years. He died in 1947. Later, Helma married William Stevens. Helma and Gust were the parents of three daughters—Thelma, Betty, and Marie. Marie was prominent in Island County business, cultural, and political circles for many years. She was married to Dewey Hoekstra, a native Whidbey Islander. They operated the Midvale Store and also a hardware store in Langley at various times. They were the parents of Duane, Janice, and Bruce. Dewey held a position on the Island County planning board and other county offices for several years. Marie was an early columnist for the South Whidbey Record and the author of several popular cookbooks. She was also a member of the Island County planning commission and a board member of the South Whidbey Historical Society at the time of her death in 1983. During her later years, she was married to Leo Bevers of Lagoon Point. Jacob Simmons, Junior, better known as “Cuppy,” shared his mischievous temperament, good looks, and attraction for the opposite sex with his older brother Martin. His mother used to say “I had nine children and Cuppy.” During his growing up and teen-age years, he helped his father and older brothers with logging and road¬building. Later, he joined the Coast Guard and was stationed at New Haven, Connecticut. There, he met and married Dorothy Reynolds. After a Coast Guard stint in Hawaii, Cuppy was transfer¬red to San Francisco where he became very ill and was pronounced dying by the doctors. However, his fiery little wife would not accept this verdict and finally found a doctor who was able to save his life. After his recovery, Cuppy did not bring his wife and two daughters, Sondra and Jackie, back to South Whidbey Island; instead, they settled in Connecticut where he worked in a watch factory until he retired in 1969. He was 80 years old in 1985 and reported to be still a handsome and vig¬orous man when he visited Clinton.

Young Teddy Simmons was hauling a wagon load of logs down the Clinton hill to the beach when he encountered a pretty 15-year-old girl walking along the road. Her family, the Peter An¬dersons, had just moved onto the farm next to the Simmons property on Deer Lake Road. Teddy con¬cluded that offering her a ride was the neighborly thing to do. Little did he realize that his simple neighborly gesture would end in marriage when they both had grown up.

For the first three years after they were mar¬ried, they went to Wenatchee each fall to pick ap¬ples, living in a tent with a wooden foundation. Teddy purchased land from his father’s property and built their first home—which was made of boards up to about a four-foot height with a tent making the top. Later they built a one-room house and kept adding on until they ended up with a large home having a beautiful view across the water toward Everett. When the ferries first started running, skippers used the house as a direction-finder in the daytime and as a beacon at night when its lights were on.

After a few miscellaneous jobs, Ted Simmons became a school bus driver and continued this work for 33 years. He was popular with both stu¬dents and teachers. One of the school year-books is dedicated to him. The PTA also honored him with a program titled “This is your life, Teddy Simmons.”

finishing of the building and took over manage¬ment of the business with his wife as bookkeeper. His younger brother Gordon, still in high school, assisted in running the garage in his spare time. Later, when he finished school, he and Melvin be¬came partners in the business, operating it to¬gether for 30 years. In recent years, Gordon and his wife Shirley Novarra Simmons have operated the garage while Melvin concentrated on his work as a building contractor and septic tank installer.

Another brother, Henry, moved to Seattle and operated Green Lake Bowl for many years. He continues to spend much of his time at his summer home on Deer Lake. Henry and his wife Ozella have three children—Wanda, Roger, and Craig.
Gordon and Shirley Simmons are the parents of Sonya and Sharon. Melvin and Eva have lived in their present Clinton view home on Conrad Street for 32 years. They are the parents of Philip and Paul (both of whom live on Whidbey as this is written) and Richard, who lives with his wife in Kent.

Ted Simmons died in 1969, but his widow, Esther, now 90 years old as this is written, is living in Clinton. The story of her parents—Peter and Pauline Anderson (and their family)—is told on the following pages.