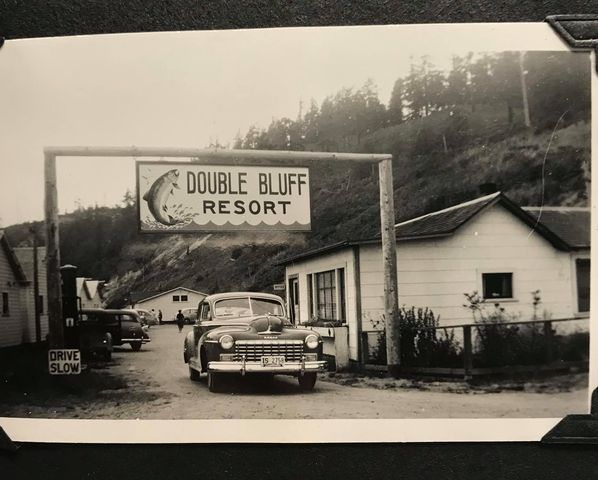 Before it became a public picnic area, the entrance to Double Bluff Beach was a fishing resort known for fly-fishing of silver salmon. It was originally owned by Chris Jensen and later sold to Esther and Crawford Johnston, and still later to Orie and Martha Small in the mid 1950s. It burned down in 1968, was foreclosed on, and the land was later cleared.

This was a resort description when it was owned by the Johnston’s:
“JOHNSTON’S DOUBLE BLUFF RESORT. Located 2 miles north of Bayview Corner (watch for sign), turn left 2 miles to resort. One of Whidbey Island’s most popular fishing resorts. Fly fishing for Silver Salmon as well as spinning are featured here. 8 modern cabins for parties large and small. Everything furnished except bedding and dishes. A new Cafe has been opened for the convenience of the fisherman, serving early breakfasts as well as complete dinners. 33 boats, kickers, inboards and skiffs. Marine railway for launching. Tackle store where fishing supplies may be bought and rented. Live bait in season. Safe sandy beach for children. Gas and oil service for cars and boats. Seaplanes may land here. Guide service. Crabs, geoducks, clams and bottom fish. Esther and Crawford Johnston, Owners, Rte. 1, Langley. Phone Langley 273.” 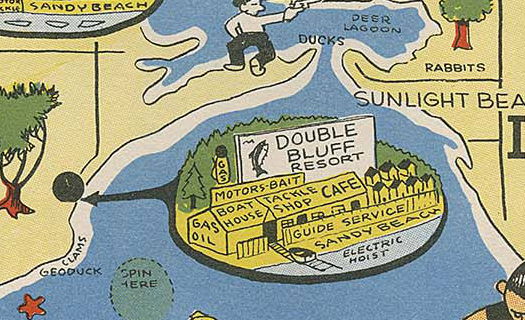 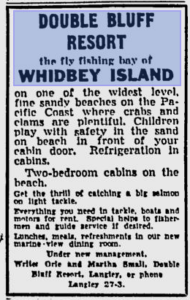