Wonder what was going on in Langley 130 years ago? Well, just like today, there was a bear around, real estate was being sold, tourists were visiting, berries were ripening, and fish were abundant.

Read on for this August 14, 1891 Island County Times articled penned by a writer under the pseudonym “Whiskers” who wrote a column about Langley titled “Langley Lispings“…

“There is no place in our county that is perhaps less known than Langley. Although it is only eight months old, it has one of the best docks on Puget Sound, one hotel that will accommodate 20 guests, one general store, post office, and several residences. Some more buildings are soon to be put up. Though the youngest place on the south end of the island; it is making by far the best progress.
The Langley Land & Improvement Company has one hundred and fifty acres slashed and ready to be cleared; also several other tracts adjoining are being cleared up.

John C. Smith, who purchased ten acres of bottom land recently from Jacob Anthes, is putting it in fine shape. He intends to make it a fruit farm exclusively.

J. Anthes is having ten acres in fruit orchard and all the trees are doing fine…

David Franklin shot a bear yesterday within a quarter mile of the city limits. There were two of them, but one got away. Bear are not so plentiful here this year as last, over a dozen of them having been killed in this neighborhood last summer.

Fred Sholl met with a severe accident about a week ago. He was holding a nail for another party to drive, and from a blow of the hammer, it flew up, striking him in the eye, nearly cutting it in two. He is in danger of losing his sight entirely, but is now in Seattle getting the best attendance possible.

Fred McBride is digging a well behind the hotel to save him from carrying water so far.

Miss Strawbridge’s place is looking fine this year and she is expecting a large crop.

The way fruit and berries thrive in this neighborhood would convince the most doubtful as to the fertility of the soil and its adaptiveness for fruit culture. No doubt in short time this will be one of the leading industries at this end of the island.
Jacob Anthes shipped eighty cords of wood on a scow to the Stetson & Post Mill Company of Seattle, a few days ago.
Fish are very abundant around the dock, where fine salmon, trout and rock cod can be caught.

Anyone wanting to have a nice place to spend a week’s vacation should come to Langley, and they would surely come again, as they will find accommodations excellent.” — Whiskers 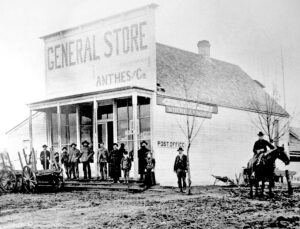