Fair Friday… Swante Kyllonen was born in 1893 on South Whidbey, the eldest child of 17 born to a Finnish immigrant couple, Herman and Finna Kyllonen. They settled on a 160-acre farm on Kyllonen Hill at what is now the Chinook Lands and Whidbey Institute. 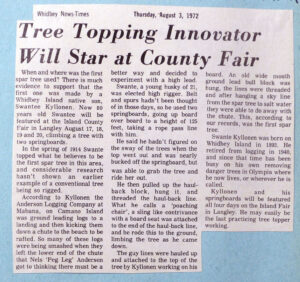 Swante’s father showed him how to log trees at age 7, when he would bring him his lunch out in the forest. He was a logger all his life, save when he served in WWI.
Swante’s tree-topping skills were demonstrated at several Island County Fairs as well as many others around the state, and he was also featured at the 1962 Seattle World’s Fair as well as on TV.
One newspaper account noted that at age 80, he no longer danced 200 feet atop a tree after demonstrating his unique tree topping method using springboards. He said he stopped doing that at age 70. He was still doing demonstrations at age 83 however, two years before he died. 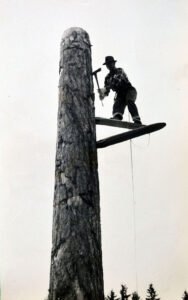 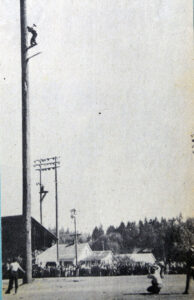