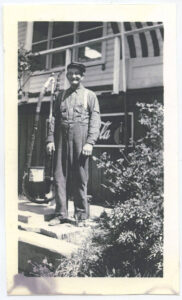 Familiar with the name of a passenger boat named “Weary Willie?” Neither were we, but then, while doing research for an article in our upcoming Historical Society newsletter, we came across this 1939 article by Present “P.H.” Cookson. He owned the general store and post office in Austin (located in Freeland near the Frank D. Robinson Beach on Mutiny Bay).

The store was located just up the road from the end of the wooden Austin dock at the corner of Lancaster and Mutiny Bay Road. Mosquito Fleet passenger boats used to dock at Austin (which was named for Austin ‘Deke’ Marshall by his father who came to South Whidbey about 1880 and founded Austin).

From the November 20, 1939 issue of the Whidby (sic) Record:
“Austin Changed Since the Days of Weary Willie”
Reminiscences of the years spent in Austin and on Mutiny Bay lead me to think of the great changes in modes and faculty of transportation that have come about.
The times when it took eight or ten hours to go to Seattle on the boat, Weary Willie, or in some neighbor’s launch. It took two hours to drive to Langley over very rough roads with few ranches along the way, each a small clearing in the woods.

The ranchers had to haul their produce many weary miles in order to ship by launch to the mainland. Dollars were scarce as hen’s teeth in those days, too. It took two days to get to the County seat (Coupeville) to transact business at the courthouse.

Now, with our fine roads and cars, it is a joy to travel over our beautiful Island, seeing the highways lined with many fine homes. Of course, we Austin folks think Mutiny Bay is a paradise in which to live, with its lovely sandy beaches, gorgeous sunsets, breath-taking views of the snow-capped Olympics, the ocean-going boats, good salmon fishing, and many other benefits too numerous to mention. Many people from the cities feel the same way and have established homes here; others come for the weekends and holidays. 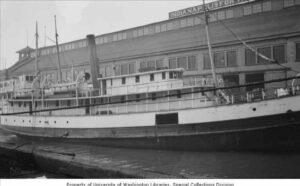 The daily roundtrip stage, trucks calling at farms for all manner of produce, our dependence on electricity — all emphasize the immense amount of progress this little community has made.
And with it all, we still have the quietness and peace of the country where the great Maker and Giver of all good seems especially near to us. What more can man ask?” – P.H. Cookson
The ‘Weary Willie’ was actually the Hawaiian schooner WAIALEALE built by the Hall Brothers at Port Blakely in 1884.

In 1905 the vessel was brought to the Puget Sound by Cary Cook of Cook & Company and operated as a propeller steamer on the Tacoma-Vancouver run, replacing the MAINLANDER. She retained her Hawaiian name (pronounce Wye-Ally-Ally), but was universally known as “Weary Willie.”

In 1907 she was taken over by the Puget Sound Navigation Company. She was dismantled in Seattle in 1927. (Source: Newell, Gordon, ed. “The H.W. McCurdy Marine History of the Pacific Northwest.” Seattle: The Superior Company, 1966.) Waialeale photo courtesy of the University of Washington Libraries, Special Collections