ONE MATCHING GRANT MET; A NEW ONE OFFERED… 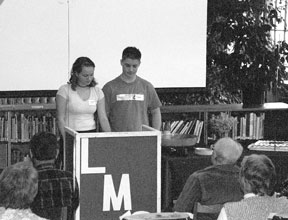 Sometimes seeds are planted in young lives which continue to bear fruit years and even decades later. Such is the case with Derel Gabelein, a 32-year-old South Whidbey resident who operates his own wood slab cutting business for furniture making.
(His Facebook page is at: https://www.facebook.com/pnw.slabs.5)
Back in 2002 when Derel was a South Whidbey Middle School eighth-grader in then-teacher (now Elementary School Principal) Susie Richard’s English Communications class, he participated in a pilot program called “Youth in Philanthropy.”
Students were tasked with raising an initial $500 in order to receive a $10,000 grant from The Glaser Foundation (plus weekly mentoring by the Foundation’s president, Bill Carlstrom). They would then decide to make grants to local charities. The South Whidbey Historical Society was one of the recipients.
“That class had a big effect on me,” Gabelein said. “I was able to attend a national conference and continued to mentor the next year’s class as well. It stayed with me all this time.”
It stuck so much so that Derel didn’t hesitate to respond when he read a post on the Historical Society’s Facebook page asking for matching funds to make up for lost parking lot fees when the Whidbey Fair was cancelled.
In fact, he rode his motorcycle down to meet a representative of the Historical Society to make a donation – matching the entire $1,500 grant put up by Board members. (Thanks to additional donors, that grant has now been matched twice over.)
In a 2002 South Whidbey Record article, Susie Richards was quoted as saying that the class helped students meet real community needs and develop civic responsibility.
“The students gained an incredible sense of achievement and connection to their community,” she said. “They saw firsthand that through hard work and follow through, they can truly make a difference.”
Those long-ago class members included Derel Gabelein, Kassie Weber, Marco Flores, Jeff Riggs, Stephanie Sanford, Topher Kline, Katie Murphy and John Moore.
Nancy Nordhoff makes a $5,000 matching grant challenge
Now there is another opportunity to match a $5,000 grant being made by local philanthropist Nancy Nordhoff to help the South Whidbey Historical Society continue our mission through these troubled times.
Ms. Nordhoff has long been a long supporter of the South Whidbey Historical Society, last year donating funds toward painting the exterior of the Museum.
Donations can be made online at www.southwhidbeyhistory.org or via a check mailed to SWHS / PO Box 612 / Langley, WA 98260.
We are most grateful for your financial support.
https://www.paypal.com/donate?hosted_button_id=LMQ4EFTT8XQ74