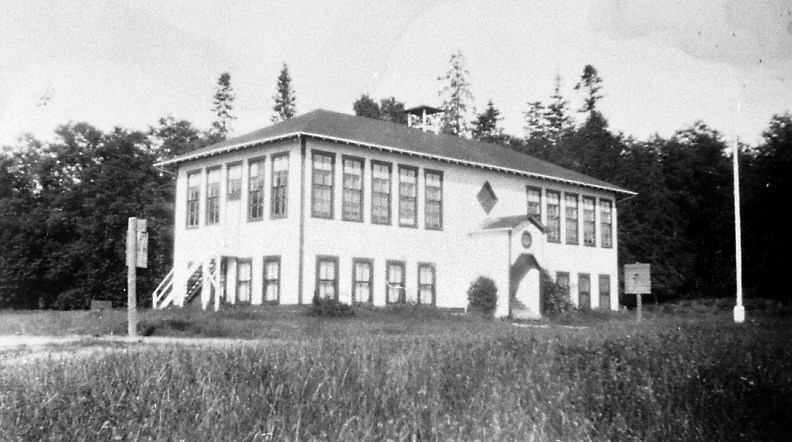 As South Whidbey became more and more settled by immigrants from Europe and Americans pushing west for the dream of a better life, schools were established in the small communities dotting the Island.

Some of these early schools took place in homes or logging camps. Eventually, school districts were formed and resources and labor donated to build wooden structures.

The first school at Mutiny Bay was a small log structure built in 1885 near what would become Cookson’s Corner (so named for the store which was located at the end of the long wooden dock just a little up the hill near what is now Lancaster and Mutiny Bay Road) in Austin (now the Robinson’s Beach area).

Louisa Johnson was the eldest daughter of early settler William Johnson and his wife Gah-toh-Litsa (also known as Zah-toh-Litsa, aka Jane Johnson Oliver). Gah-toh-Litsa was a woman of high birth status in the Snohomish Tribe. Louisa grew up with her parents and 7 siblings at Double Bluff. It is likely that she attended the log school in Austin for at least a few years.

In 1889, when she was 16, Louisa married 49-year-old Mutiny Bay neighbor Nathaniel Porter, who was a widower with two children.

The Porters had a growing family of eventually 8 children and believed in the importance of an education. In 1897 they deeded a small piece of land (210 feet by 105 feet) for a schoolhouse which operated until a newer schoolhouse was built.

In 1911, the Porters sold four acres for the third and last school built at Mutiny Bay.

A photo shows some of the men from the Free Land Colony (a utopian Socialist Colony) helping with the construction in 1911. The new school, a beautifully built two-story structure, opened September 9, 1912.

It is this Mutiny Bay School of which the late John H. Baker wrote about in his memoirs: Baker’s Store – Early Days on Whidbey Island. He began attending first grade at the school 1921.

“I suppose anyone who attended an old time one or two room school feels their school and the teacher who taught there were something special. And rightly so, for not only were those teachers something special… but also most of the school directors had a knack of locating schools where there were many other attractions besides the rudiments of reading, writing and arithmetic.

So it was when the Directors looked for a place to build a school that would serve the Bush Point, Baker’s Corner, Austin and Freeland areas. The land obtained from the Porter family on the shores of Mutiny Bay, after which the school was named, was a student’s dream.

During class they could look out of the windows and see ocean-going ships traveling the world ports, and the Puget Sound mosquito fleet making all the ports in the area. Its location also prompted almost daily trips along the shore along the shore looking for drift or following the channel of slough in search of crabs or watching an old skate or octopus burying itself in the mud or building a home.

The schools of small fish that inhabited the slough were always fun to try and catch and the bullheads were frequently caught with a piece of string and a bent pin. Then they were returned to the water as they were of little use.

In the Fall when school was new and minds were open we became Magellan, Cook, Vancouver, or Drake and our teacher was the great Queen Victoria, who financed our voyages to the far corners of the earth and rewarded us with gold and silver on our return.

In the Spring, when school was old and our minds restless, the teacher became the mad Queen Isabel who offered a pot of gold for our heads…

Down towards Austin was the leaning fir tree where the mutinous crew after which the bay was named, strung up the officers of their ship. Whether you were a member of the crew or a condemned officer, it was great fun reenacting the mutiny.

In the Spring and Fall fish traps were examined and it was the thrill of the year to have the trap crew load us into dories and row us out to see the crew brail fish from the spiller. When a derelict of the rum running fleet drifted ashore it became almost a second home for us boys. Ah, for those days of our youth when imaginations ran wild and days were without end!.

Behind the school was a fresh water swamp that would freeze over for skating in the winter time. In the Spring it was great for wading and feeling the muddy bottom squeeze between your toes.

It was in these woods and along the shore of Mutiny Bay that Miss Alma Anderson (later Alma Anderson Porter Grist) developed the memorable treasure hunts that took place several times a year. In the morning after the flag salute, Miss Anderson would announce that today, classes would be held while on a hunt for buried treasure.

Maps, difficult to follow to the location of the clues, were passed out and the hunt was on. Anyone finding a clue would announce the find and when all were gathered at the site Miss Anderson would conduct a reading, spelling, or arithmetic class. Then, upon finding another clue it might be exercise, nature study or singing. Finally, ending back near the school, we were rewarded with a jawbreaker (candy) or other small items. The rewards of memories and experiences were for a lifetime.”
———-Excerpted from “Baker’s Store – Early Days on Whidbey Island” by John H. Baker.

School Districts on South Whidbey consolidated into one big district by the late 1930s and rural schools were closing down, with students bussed to Langley. However, Mutiny Bay and Bay View Schools stayed open until after the new brick school was built in Langley and opened in 1942.

Even then, it wasn’t until a full year later in September of 1943 that Mutiny Bay School students started attending the brick Langley Elementary School.

The June 3, 1943 Whidbey Record newspaper reported a school picnic of 80 people to bid farewell to the two-story wooden structure. The article stated, “It was with understandable regret that many viewed the finality of the occasion since the rural school has been the community and cultural center of the neighborhood since the first settling of the district.”

Mutiny Bay School was purchased by Otto Anderson (brother of Alma Anderson Porter Grist), who tore it down and used the lumber, especially the mahogany wood, in a new building being built in Langley – the Masonic Temple — now Langley City Hall.
—————————————
If you have any family stories, recollections or photos, of Mutiny Bay School, please contact the South Whidbey Historical Society at SWHMuseum@gmail.com. We would love to hear them.
—————————————

Finally, if you love learning about local history as much as we love sharing it, would you please consider making a donation or legacy bequest to the South Whidbey Historical Society? Our non-profit EIN # is 91-1180809. 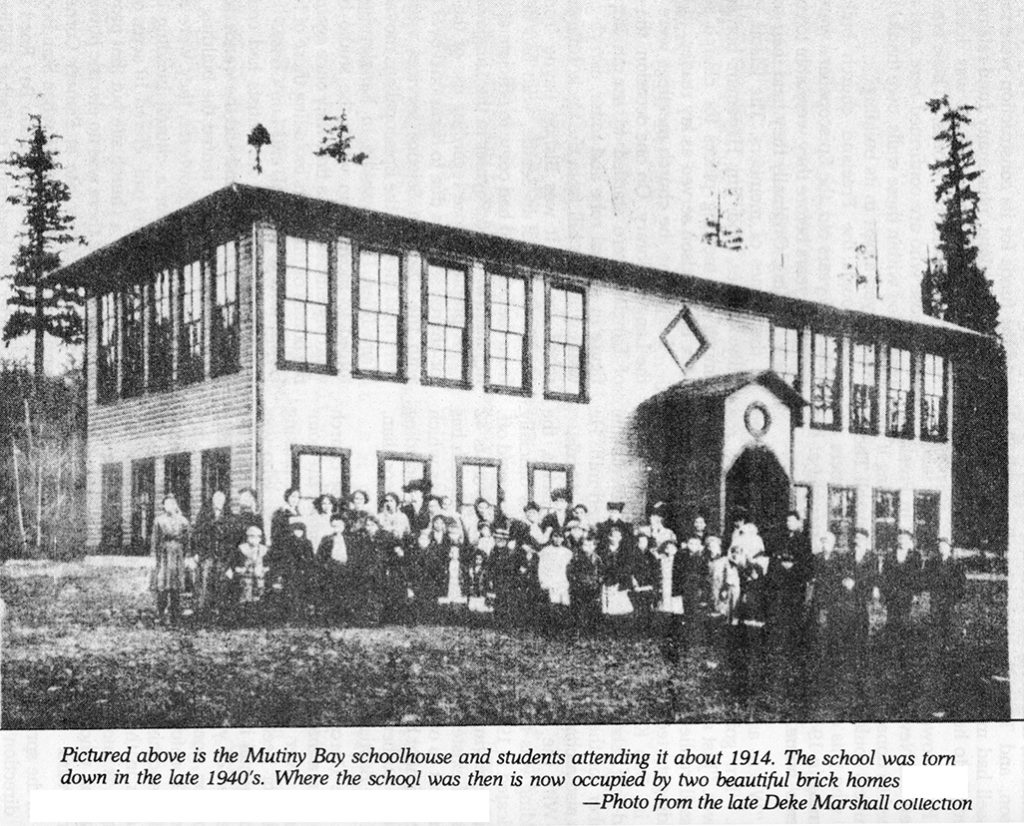 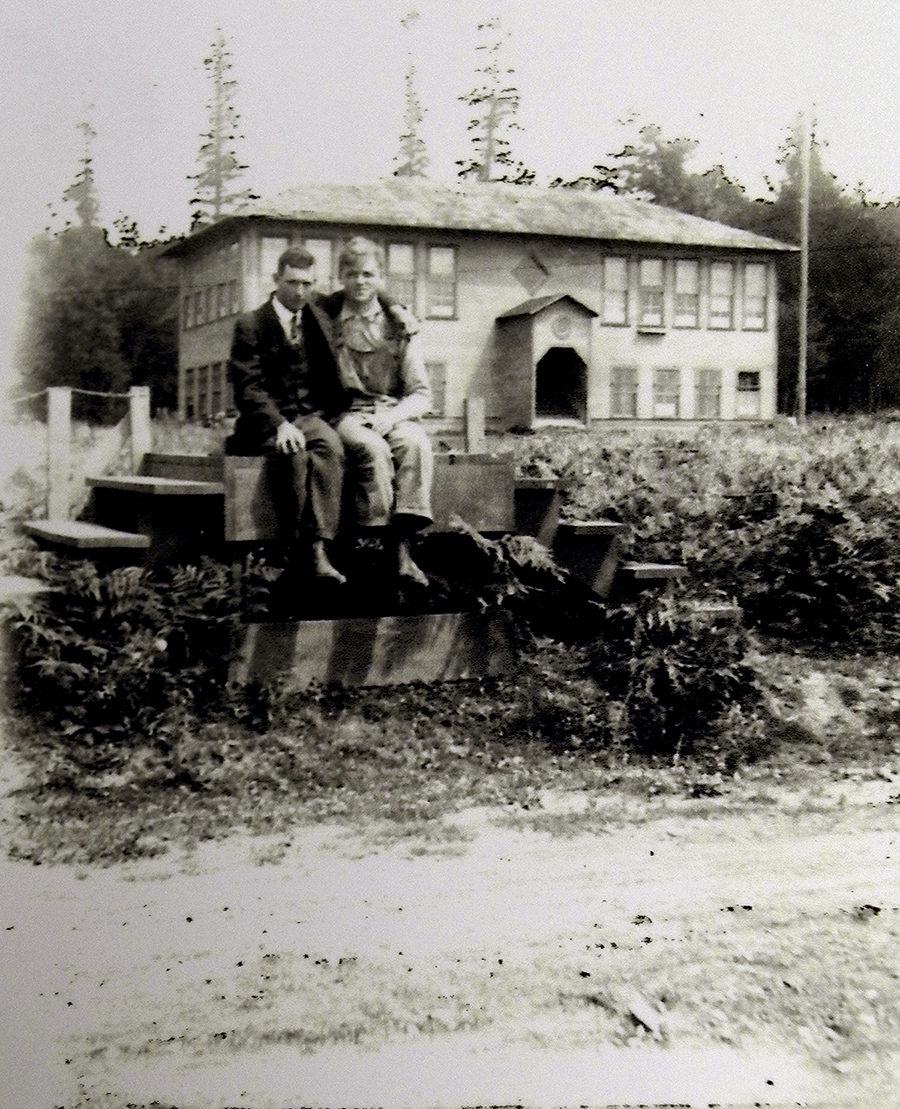 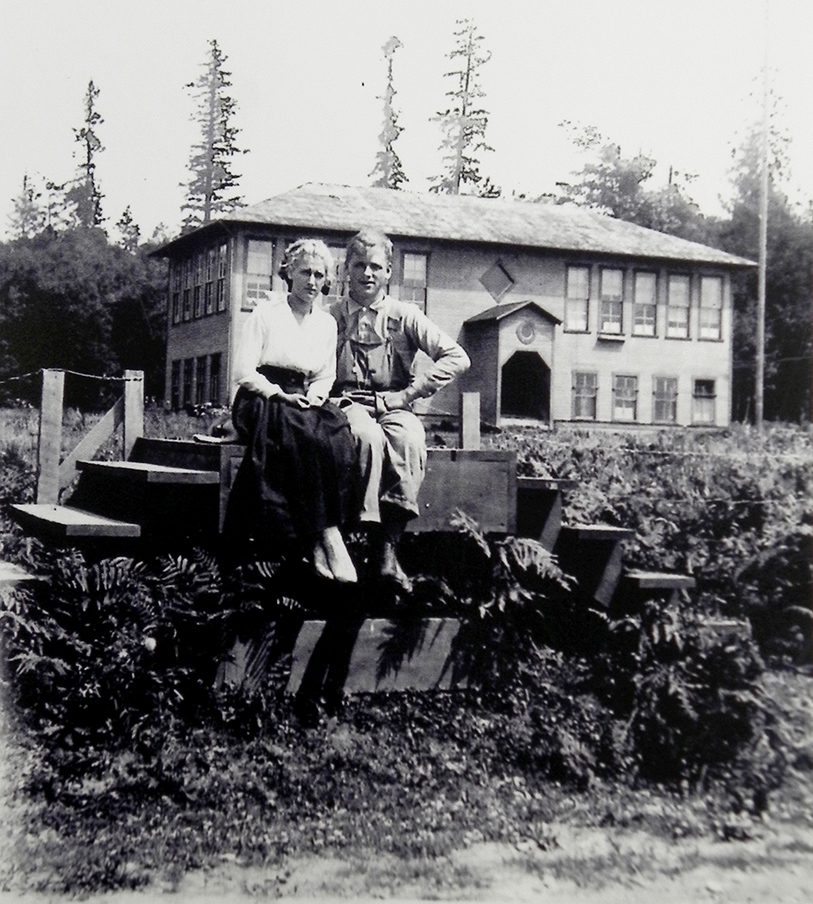 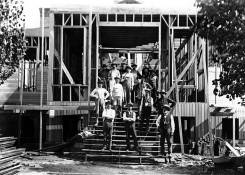