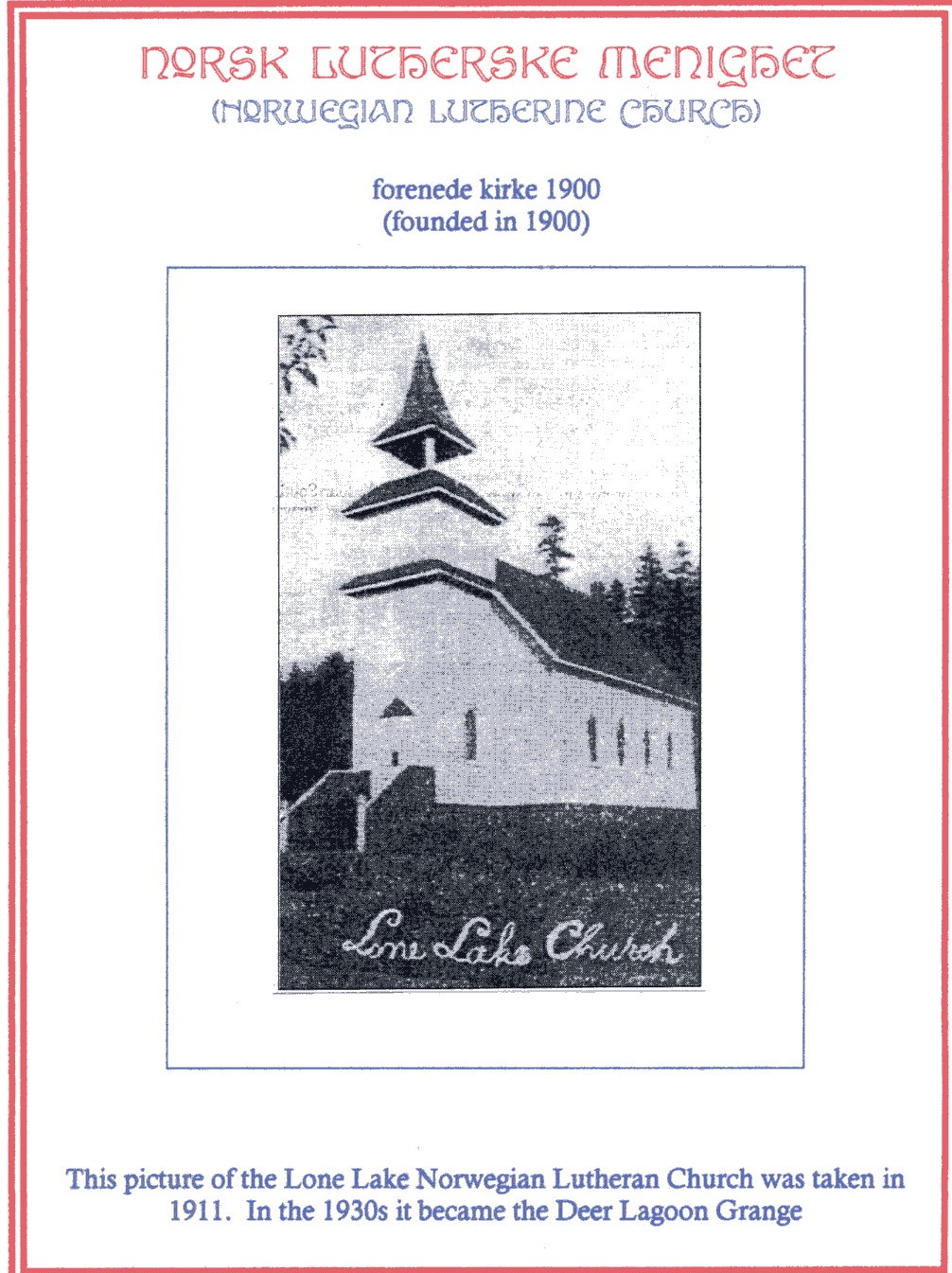 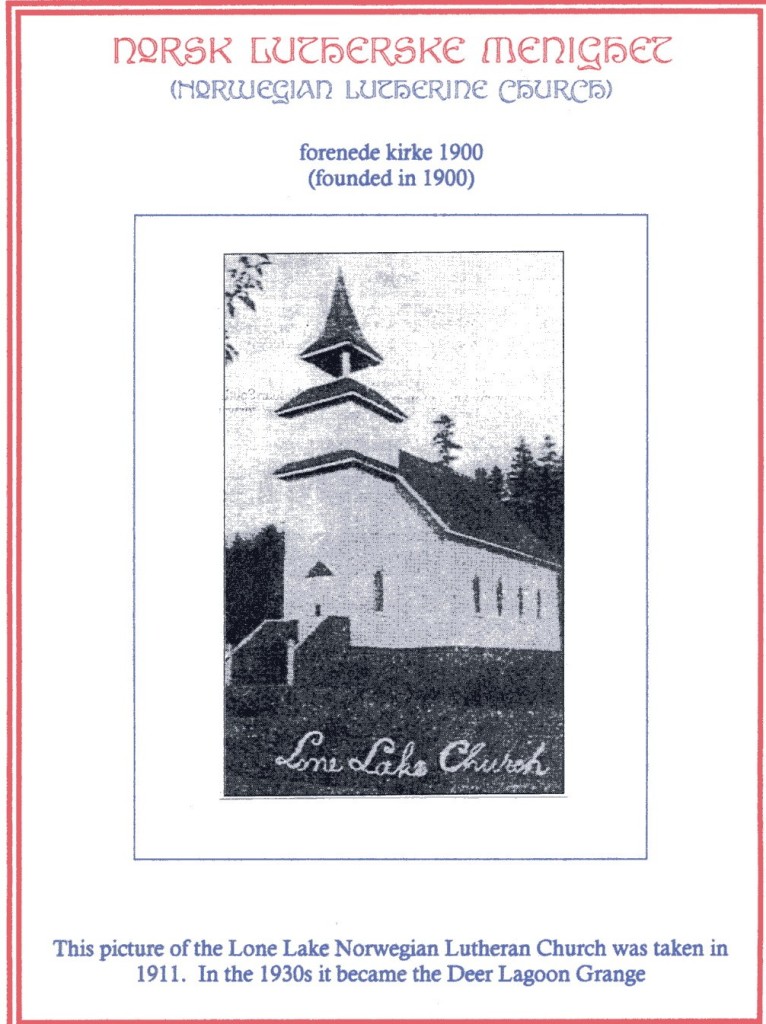 In 1904, Lone Lake Lutheran Church was built overlooking the lake.  It served Norwegians and other Scandinavians.  From 1909 to 1911, the Reverend E. J. Sandvig was pastor for both Lone Lake Lutheran and St Peters Lutheran Churches. Early pictures (1911) show the building’s main entrance facing the lake with a tall steeple at the front door.  At some point the building was expanded.  Four original windows from the north side were incorporated into the addition.  Today, two of those windows are on the west wall and two are on the east wall.

Arthur J. Burke described the church in the 1920’s.  He said that families that lived around the lake would come to services by rowboat.  Others would come by horse and buggy.  The horses would be stabled in an old barn.  The roads were very rutty, little better than wagon tracks, especially during the winter.  Few people had automobiles.  His sisters told him how he was baptized by immersion into Lone Lake.  He was taken across the lake where the public access area is now.  The area had a gravel bottom and they could wade there.  Surrounded by the minister and the church folk, he was dunked into the water.  When he was nine or ten years old, he was hired to cut wood and started the stove to heat the church for meetings.  He was paid twenty-five cents a month for this task.

In 1935, the church property was sold to the Deer Lagoon Grange.  The Lone Lake Congregation merged with St Peter’s Lutheran Church in Clinton.

The Deer Lagoon Grange was founded in 1927.  The local farming community recognized a need for cooperation and influence in political affairs. Their action resulted in the appointment of an Island County Extension Agent in 1930 and the first Fire Insurance Agent in 1931.   The Grange has been the steward of the building ever since.  Pictures taken in 1938 show the structure being converted from a church to a grange hall.  In 1941, the State Grange recognized the building for its beautiful restoration.

When World War II broke out, the Grange played a very important role.  Dish clothes were sold and box lunches were given.  The Grange emergency hospital was started.  The Grange took an active part in encouraging all American families to grow victory garden
s during those years. Following the war, as Fort Casey was being dismantled, the Grange received surplus maple flooring. The flooring still is present in the main meeting room. 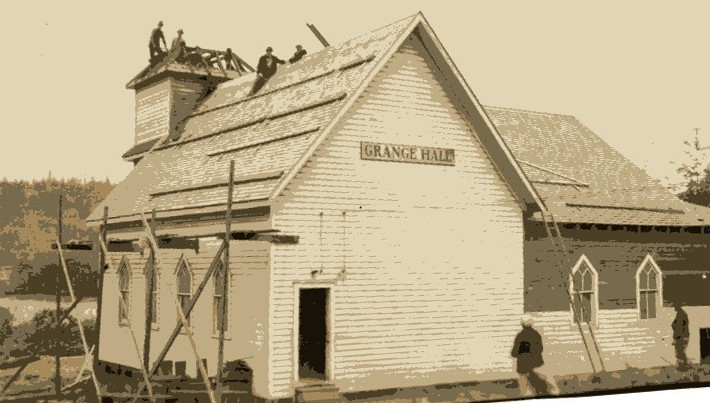 The Deer Lagoon Grange has been involved in many political issues facing south Whidbey citizens.  In 1946, they recommended the road coming from the ferry be improved.  It was deemed unsafe because of its narrow two-lane configuration.  Later, the Grange took a position that the State of Washington should take over the ferry service offered by the Black Ball Line.  Between weddings, meetings, card meetings, fisherman breakfasts, and other celebrations a lot of South Whidbey History has taken place in the Deer Lagoon Grange Building.

Over the years, the Grange has been fulfilling their goals to preserve the rural way of life, provide technology to the community, and to honor our heritage.  In 2004, the Bill and Melinda Gates Foundation provided computers to the Grange supporting their mission to bring education and technology to rural areas.  Free computer classes are offered.  In the fall of 2005, the Grange provided over four hundred dictionaries to third grade students of South and Central Whidbey. 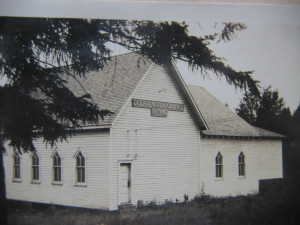 In 2002, the Grange undertook a major renovation project to restore the building to show much of its original character.   Some of the original building cedar footing and timber foundations had to be replaced due to termite damage.  Paneling was removed from the wall exposing much of the original bead board.  The maple floors from Fort Casey were completely refinished. Finally, the building was completely repainted in heritage colors.  This restoration project resulted in a second place award by the State Grange.

Today the Deer Lagoon Grange continues to play a key role in the happenings of South Whidbey.  Being involved in activities from the County Fair in Langley and supporting youth in leadership and education, they provide a meeting place for the community.  That meeting place has been part of island history for over one hundred years. 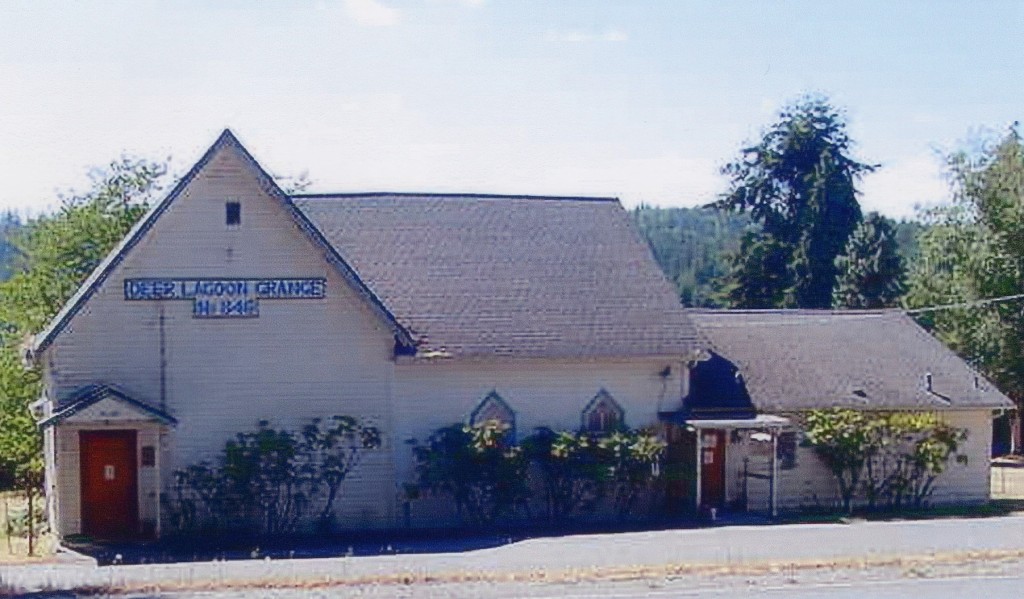