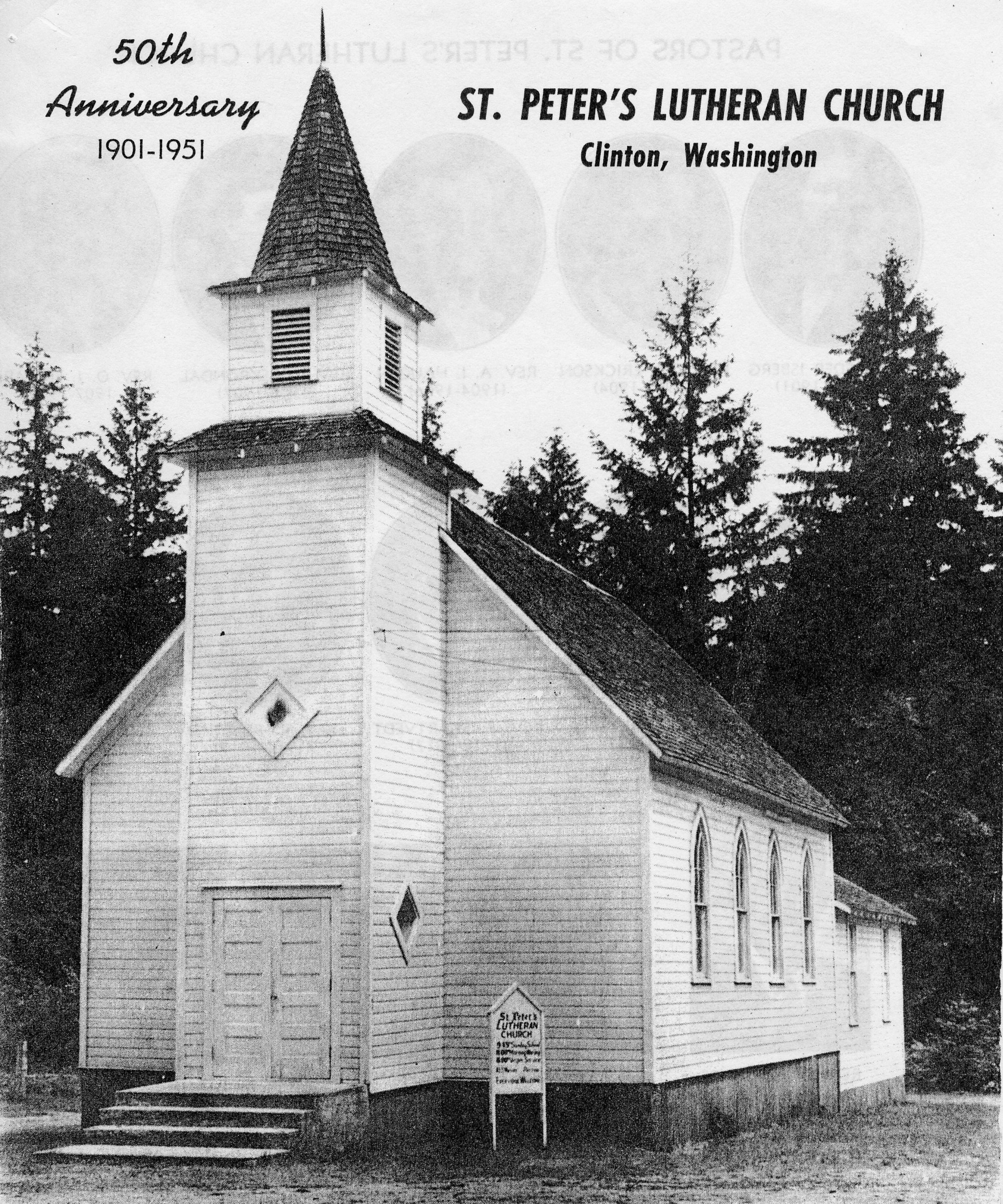 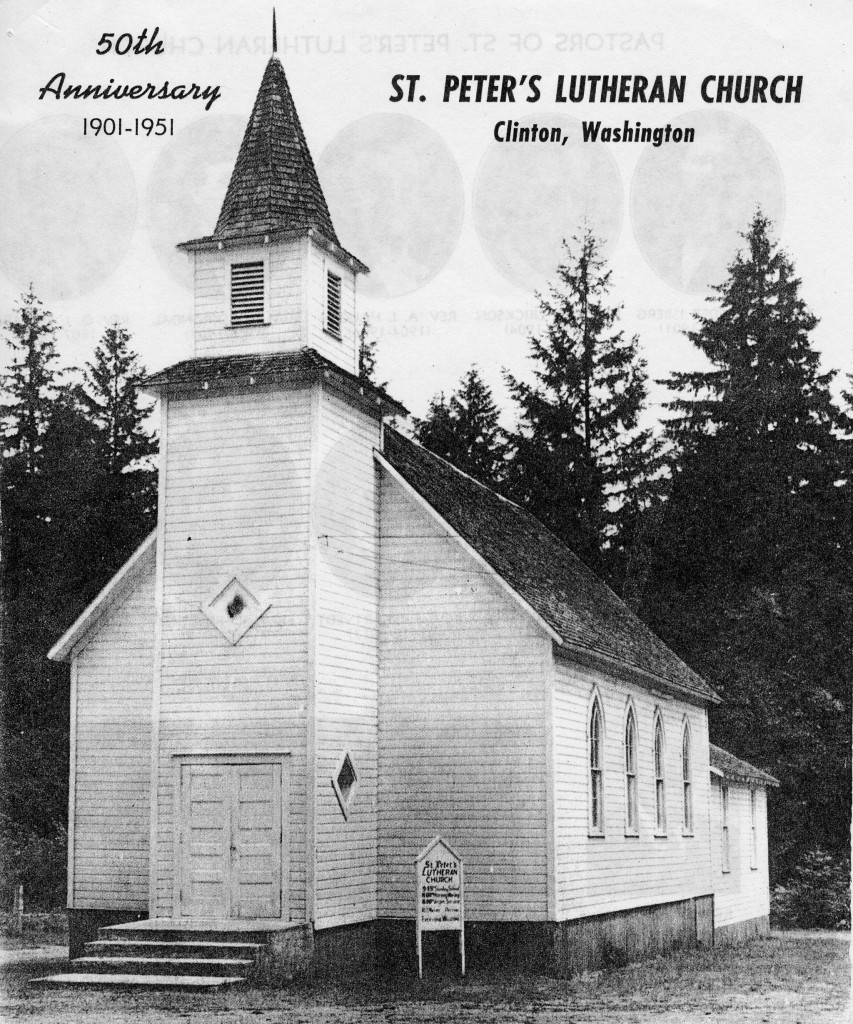 The first pastor was Reverend Peder Isberg.  He had served as a pastor in the town Stanwood where he also worked as a carpenter.  Charter members of St Peters told how he would row a boat from Stanwood to Clinton arriving almost any time day or night.   As he came walking up over the hill from Brighton Beach, he was wrapped in a big quilt, which covered his naturally huge body.  Services at the time were held in the homes of the congregation.  Those first ministers all came from Nordic backgrounds.  Their names beside Pastor Isberg included Pastors Erickson, Haugen, Skrondal , Edwards, Sandvig, Skattebol, Skartvedt, and Bogatstd

In 1904, Chris and Martha Berg deeded the property on which the church now stands. Construction of the church was started shortly afterwards with lumber being brought across the sound in rowboats.  In those early years, the congregation was concerned about holding to the doctrine of the Lutheran Church.  Strict adherence to the Augsburg Confession was required. Services were delivered in Norwegian.  Parishioners would hear “Fader Vor, Du Som Er I Himmelen” as the Lords prayer from the alter was given.   In 1908, it was decided to give services in English with an occasional service in Norwegian.  Ground was cleared around the church and the cemetery was platted.  The Pastor was paid seventy-five dollars a year.  An organ was purchased and the congregation was incorporated in 1909.

From 1909 to 1911 the Reverend E.J. Sandvig served both St Peters and Lone Lake Lutheran.  Once the altar was completed, St Peters was dedicated March 10, 1912.  In 1914, the tower was moved from the northwest corner to the center of the west end of the church.  In 1915, doors and windows were put into the tower.  In 1918, women were given the right to vote in the congregation.  In 1920, Reverend O.L. Berge was called.  His salary was set at one hundred twenty-five dollars for the first year and then raised to two hundred dollars.  He served until 1934.  In 1922, a five hundred pound church bell was purchased and installed. The ringing of that bell is still heard in Clinton every Sunday as a call to worship.

Many things have been added to the church from time to time.  Oil lamps first lit the church.  Hanging in brackets on the wall they made the sanctuary seem a real hallowed place with soft lights flickering. Later, gas lanterns hung from the ceiling. Now, electric lights luminate the church.  A huge pot bellied stove stood where the piano is today.  People flocked to front rows to keep warm.  The men no longer sit on the right side with the women on the left.  The old wooden pews that hurt your back and tore your stockings are gone.  In 1945, the old organ was completely repaired.  It was noted that that it was one of the oldest reed organ sill in use on the west coast.

In 1947, Pastor Leon Holm became the first full time resident pastor.  A parsonage was purchased for seventy-one hundred dollars.  The church changed its Norwegian name to St Peters and a new constitution was adopted.  The pastor’s salary was raised from three hundred dollars a year to sixteen hundred dollars a year.  On March 6, 1949 clear title to the property was given to St Peters by court action.  This involved changing the deed originally given by Chris and Martha Berg.  The term of the church was made perpetual.

In 1954, Trinity Lutheran Church at Freeland, a newly organized congregation, became part of our parish.  In 1976, Trinity began a feasibility study of becoming an independent self-supporting church due to the growth of their area.  In 1957, two lots were purchased on Humphrey road and a new parsonage was built.  The old parsonage was sold because it was too small and needed much repair. During the nineteen sixties, a new entrance was added to the front maintaining the steeple and the bell.  In the late nineteen seventies, a new foundation with a basement was added to the fellowship hall.  The basement now provides rooms for Sunday school.

In 2001, St Peters celebrated it one-hundredth anniversary as an active congregation.  Elsie Olkonen tells the history in a poem.

It is a little church – in a little town

Built by a faithful few

The most of these are long since gone,

God’s work is carried on.

Sustained by faith in God in a little town

And those who worshipped long ago

Were first to lead the way.

The same sweet bell rings out – just to call us in

To worship our dear Lord

That rang for those so long ago

To worship of our Lord

And tho the years have changed – our little town

Their message is still clear

Come be with us, and join with us

God’s work is not yet done.

Cherish the memory – of their faith and trust

In everyone of you

To make this church a haven of

They may well ask of you

Come worship here as we did long ago

In this little church in Clinton town

Built by a faithful few.