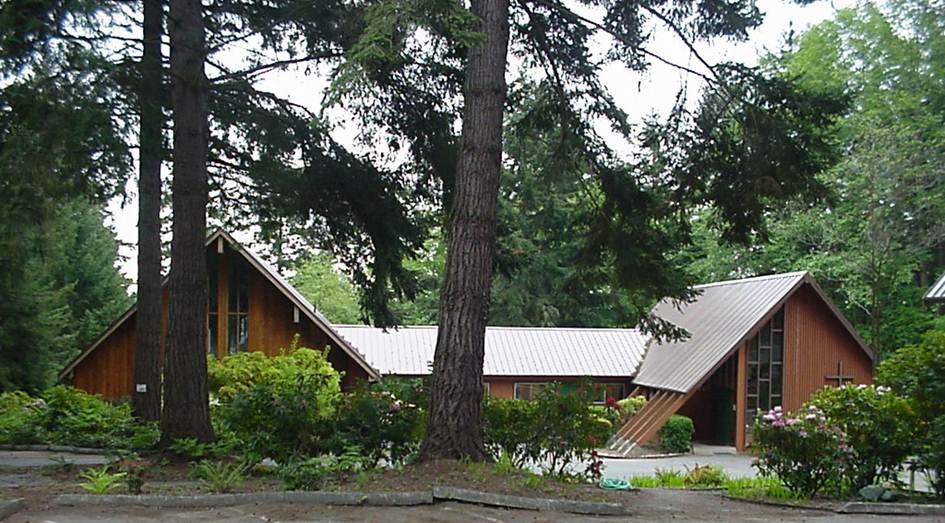 In 1950, St. Augustine’s in-the-Woods was created as one of two new mission churches on Whidbey Island under the auspices of Trinity Episcopal Church in Everett, Wash., in order to bring the Episcopal Church to people on the 52-mile-long island just across Puget Sound to the west. The mission was named for St. Augustine of Canterbury, a Benedictine Monk sent by Pope Gregory the Great in the 6th Century to bring Christianity to an island the Romans called “Britannia”. Today that country is called England.
The Whidbey mission was begun in response to a request for regular services by a small group of Episcopalians living on the island, which at the time was sparsely populated with narrow, winding roads and frequently undependable ferry service.

For the first dozen years, we held services at the Langley Public Library, then in a dance studio in Langley, then at the Seventh-Day Adventist Church in Freeland. For our first confirmation service in 1952, the Bishop arrived from Seattle by boat and hiked up to the Langley library from the beach. Our traditions quickly developed. The foremost is participation. Hard work, group effort, creativity and use of whatever resources we can get our hands on have been the hallmark of our parish development.

After raising money at any number of sales, bazaars and community events, our first church building was constructed in the early 1960s on donated land above Holmes Harbor near Freeland. Churchwomen purchased a steeple from a church in Mount Vernon with money from a bake sale in Bayview, a hot dog sale in Freeland and dinners at Chamber of Commerce meetings. A parishioner’s gift of stock paid for the pews. Bulletins were printed on a donated mimeograph machine. Some traditions begun at that time, such as the annual Trash and Treasure Sale (which once included pony rides), continue to this day.

The first church building was dedicated by Bishop William Lewis on August 11, 1963. Within a few years, however, the congregation, still a mission, outgrew its worship space. By 1977, plans took shape for a new church. Ground was broken on May 4, 1978, and dedicated the following year. The first official St. Augustine’s choir began singing praises early in 1979. Even as it was building a new church, the parish found resources to sponsor several refugee families as the Vietnam War wound down.

Thirty years after it was founded, St. Augustine’s in-the-Woods officially became a parish in the Episcopal Diocese of Olympia in the fall of 1981. At a joyous parish meeting in January 1982, our first vestry was elected. The parish then called Fr. William M. Burnett as its first rector. Fr. Bill, as everyone knew him, had served as vicar of our mission church since 1969, so the call didn’t have to go far. Fr. Bill retired in 1998, after nearly 30 years at St. Augustine’s, and  continued as our rector emeritus. 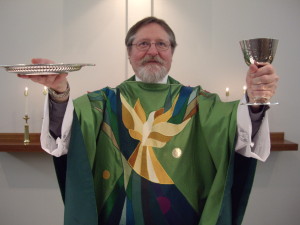 In October 2000, Rev. Nigel J. Taber-Hamilton was called as rector (senior pastor) of our parish – only the second priest to serve as St. Augustine’s rector. Fr. Nigel came to us from Bloomington, Ind., where he served a number of congregations for 19 years in the Diocese of Indianapolis, ending with All Saints’ Episcopal Church in Seymour. He grew up in London, England, and holds a combined honors degree (MCL) from the University of Wales, Bangor, in Biblical Studies and Religious History, a second bachelor’s degree from the University of Birmingham, England, as well as his Master of Divinity degree from Queens College, also in Birmingham. He came to this country in 1977 as a World Council of Churches Ecumenical Fellow based at the Graduate Theological Union in Berkeley, Calif. He also studied at the Church Divinity School of the Pacific, our west coast Episcopal seminary, graduating in 1978. Fr. Nigel is currently finishing a Doctor of Ministry degree, jointly awarded by Seattle University (Jesuit) and San Francisco Theological Seminary (Presbyterian) – the combination of “Catholic” and “Reformed” mirroring our common Anglican heritage. In an interesting twist to our history, Fr. Nigel is married to Rev. Rachel K. Taber-Hamilton, also an Episcopal priest, who was called as the rector of Trinity Episcopal Church in Everett in February 2011 – our “mother” parish from 60 years ago!

Over the years, our parish has undergone many changes. The 1970s were turbulent times during which many young people challenged traditional forms of religion. The Episcopal Church underwent its own significant changes as it approved the ordination of women as priests and bishops, and adopted the first new prayer book in 50 years. St. Augustine’s has remained a vibrant, growing parish, though the demographics of our island are reflected in our parish community. Young families that joined us in the 1950s, 60s and 70s grew up. Some moved away. A few were drawn to other churches. By the 1980s, many of our parishioners were retirees. As South Whidbey continues to attract active retired people, so our congregation grows. Whidbey Island, with it’s pastoral setting just a 15-minute ferry ride from the mainland “Pugetopolis,” offers a delightful rural alternative to the large urban area to our southeast, and our own physical setting “in the woods” mirrors this bucolic scene.

St. Augustine’s in-the-Woods has always been deeply involved in our community on Whidbey Island. In 1981, some of our members helped establish Helping Hand, a ministry to individuals and families in crisis that has become an important source of local financial aid and referral sources. As individual Christians, we regularly volunteer at Good Cheer, our local food bank; Time Together, our local respite care program; and in annual programs like Hearts and Hammers, which helps to repair homes for those in need; and the Mobile Turkey Unit, which brings Thanksgiving meals to those who are alone or unable to leave their homes.

Many of these programs were founded by our parishioners, sometimes working with other congregations, sometimes alone. Our volunteer work is both hands-on, seeking to meet people’s needs face-to-face, and also in the background, providing administrative and financial support.

As a community, we provide financial support to many of these same organizations through our monthly Mission Sunday Offering. Each month we take up a separate collection and donate that month’s proceeds to a worthy organization (including but not limited to the ones mentioned above) – routinely this is about $1,000 a month. In addition, every Sunday our parishioners bring non-perishable food items to the church for donation to the food bank.

As a parish, we take seriously the call to serve others as Christ served us. Like any human community we sometimes struggle, but with help from the Holy Spirit we have always been able to continue together on our pilgrims’ journey. St. Augustine’s is not just a place to worship, but is a holy community affirming and living the Christian life in a beautiful natural setting that bespeaks the magnificence of God’s creation.

Facilities
Our original church building, built in 1962, housed a small worship space and parish hall. The land on Honeymoon Bay Road was donated, as were many of the materials used to erect the church. When a new church was constructed in 1978, the old building was remodeled by volunteers to accommodate a Christian education space and the parish offices.
The 1978 building had a much larger worship space and a parish hall (“the undercroft”) beneath with a kitchen, more than doubling the size of the church. Parish craftsmen created many of the interior furnishings. One member, Bert Johnson, a retired navy captain who was also a talented cabinetmaker, designed and built many of the items in the chancel area, including the large Celtic cross and kneeling rails. Another parishioner, Charlie Williams, made two carved wood pieces depicting St. Augustine of Canterbury, our patron Saint, and St. Francis of Assisi.

The Song of Creation is depicted in the stained glass windows inside the church They were designed especially for St. Augustine’s by Mark Gulsrud, a well-known Washington artist. When the window project was announced in 1995, parish members became so enthusiastic that within two weeks the entire project was funded. Over the past decade, Whidbey artist and St. Augustine’s parishioner Wren MacLean has designed and made a series of beautiful stained glass panels that hang in the undercroft. In 1997, we installed a magnificent, custom Pasi pipe organ in our choir loft. The organ was designed and built for St. Augustine’s by Martin Pasi, an Austrian organ builder who lives in Roy, Wash.

Our columbarium, nestled in the woods on the northeast section of the church grounds, was designed by local artists in the shape of a Celtic cross. The columbarium is a concrete aggregate form which houses burial niches and a memorial garden with a path constructed of beach stones. Large old trees and native growth surround the cross and a landscaped garden blends into the entry of the columbarium. It is a quiet place for reflection for many of our parish members. In 2003, Whidbey artist Georgia Gerber created a bronze statue of St. Francis of Assisi for the columbarium. Subsequently we have added other bronze statues: two otters (“Joey” and “Gladys,” humorously named by the donor for a passage from the Psalms referring to joy and gladness), a fawn, a frog (in the Coptic Church in Egypt frogs are symbols of resurrection) and a small robin. In 2009, a beautiful cast Celtic cross was installed south of the columbarium.

Our pre-school parishioners enjoy a play yard separated from the columbarium by a stand of woods. There are all sorts of swings and climbing toys for the children to use on Sundays and at other times.

In 2010, after many years of talking and planning, St. Augustine’s took a major step forward by beginning the construction of a new parish hall and office complex to replace the original, 1962 structure. Whidbey architect Stig Carlson designed a breathtaking structure that ties in perfectly with the existing church building. Groundbreaking occurred in April 2010. The 1962 building was deconsecrated and demolished. The new building was completed in mid-2011, with a dedication service on the Day of Pentecost: the birthday of the Church! It is our intent to offer our new space for the appropriate use of our local community. All of us at St. Augustine’s are excited about the new structure – a testament to our faith in God, our parish and our community! 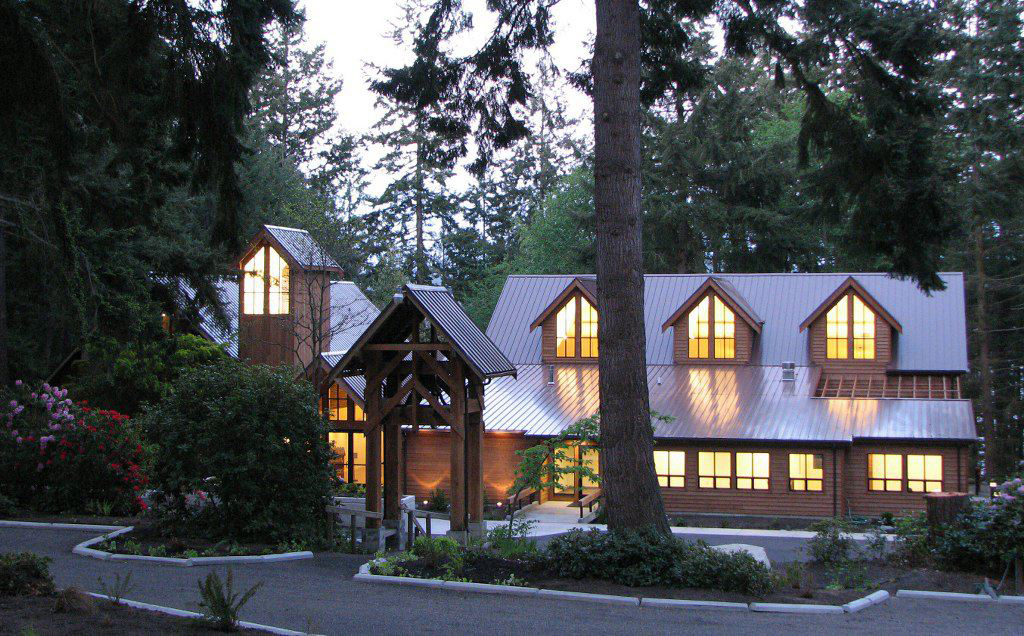